A widget toolkit, widget library, GUI toolkit, or UX library is a library or a collection of libraries containing a set of graphical control elements (called widgets) used to construct the graphical user interface (GUI) of programs.

Most widget toolkits additionally include their own rendering engine. This engine can be specific to a certain operating system or windowing system or contain back-ends to interface with more multiple ones and also with rendering APIs such as OpenGL, OpenVG, or EGL. The look and feel of the graphical control elements can be hard-coded or decoupled, allowing the graphical control elements to be themed/skinned.

Some toolkits may be used from other languages by employing language bindings. Graphical user interface builders such as e.g. Glade Interface Designer facilitate the authoring of GUIs in a WYSIWYG manner employing a user interface markup language such as in this case GtkBuilder.

The GUI of a program is commonly constructed in a cascading manner, with graphical control elements being added directly to on top of one another.

Most widget toolkits use event-driven programming as a model for interaction. [1] The toolkit handles user events, for example when the user clicks on a button. When an event is detected, it is passed on to the application where it is dealt with. The design of those toolkits has been criticized for promoting an oversimplified model of event-action, leading programmers to create error-prone, difficult to extend and excessively complex application code. [2] Finite state machines and hierarchical state machines have been proposed as high-level models to represent the interactive state changes for reactive programs.

A window is considered to be a graphical control element. In some windowing systems, windows are added directly to the scene graph (canvas) by the window manager, and can be stacked and layered on top of each other through various means. Each window is associated with a particular application which controls the widgets added to its canvas, which can be watched and modified by their associated applications.

NeWS is a discontinued windowing system developed by Sun Microsystems in the mid-1980s. Originally known as "SunDew", its primary authors were James Gosling and David S. H. Rosenthal. The NeWS interpreter was based on PostScript extending it to allow interaction and multiple "contexts" to support windows. Like PostScript, NeWS could be used as a complete programming language, but unlike PostScript, NeWS could be used to make complete interactive programs with mouse support and a GUI.

Swing is a GUI widget toolkit for Java. It is part of Oracle's Java Foundation Classes (JFC) – an API for providing a graphical user interface (GUI) for Java programs. 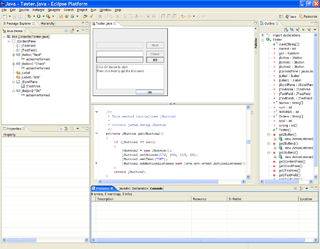 A graphical user interface builder, also known as GUI designer, is a software development tool that simplifies the creation of GUIs by allowing the designer to arrange graphical control elements using a drag-and-drop WYSIWYG editor. Without a GUI builder, a GUI must be built by manually specifying each widget's parameters in source-code, with no visual feedback until the program is run.

The Magic User Interface is an object-oriented system by Stefan Stuntz to generate and maintain graphical user interfaces. With the aid of a preferences program, the user of an application has the ability to customize the system according to personal taste.

Crazy Eddie's GUI (CEGUI) is a graphical user interface (GUI) library for the programming language C++. It was designed for the needs of video games, but is usable for non-game tasks, such as applications and tools. It is designed for user flexibility in look-and-feel, and to be adaptable to the user's choice in tools and operating systems. 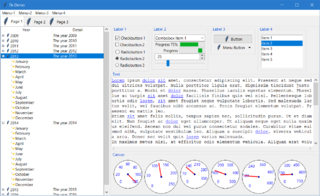 ReAction GUI is the widget toolkit engine that is used in AmigaOS 3.2-4.1.

GTK is a free and open-source cross-platform widget toolkit for creating graphical user interfaces (GUIs). It is licensed under the terms of the GNU Lesser General Public License, allowing both free and proprietary software to use it. It is one of the most popular toolkits for the Wayland and X11 windowing systems. 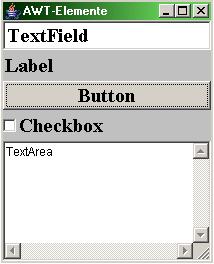 Fyne is a free and open-source cross-platform widget toolkit for creating graphical user interfaces (GUIs) across desktop and mobile platforms. Fyne uses OpenGL to provide cross-platform graphics. It is inspired by the principles of Material Design to create applications that look and behave consistently across all platforms. It is licensed under the terms of the 3-clause BSD License, supporting the creation of free and proprietary applications. In December 2019 Fyne became the most popular GUI toolkit for Go, by GitHub star count and in early February 2020 it was trending as #1 project in GitHub trending ranks.