Last updated September 08, 2021
List of options or commands within a computer program

A user chooses an option from a menu by using an input device. Some input methods require linear navigation: the user must move a cursor or otherwise pass from one menu item to another until reaching the selection. On a computer terminal, a reverse video bar may serve as the cursor.

Touch user interfaces and menus that accept codes to select menu options without navigation are two examples of non-linear interfaces.

Some of the input devices used in menu interfaces are touchscreens, keyboards, mice, remote controls, and microphones. In a voice-activated system, such as interactive voice response, a microphone sends a recording of the user's voice to a speech recognition system, which translates it to a command.

A computer using a command line interface may present a list of relevant commands with assigned short-cuts (digits, numbers or characters) on the screen. Entering the appropriate short-cut selects a menu item. A more sophisticated solution offers navigation using the cursor keys or the mouse (even in two dimensions; then the menu items appear or disappear similarly to the menus common in GUIs). The current selection is highlighted and can be activated by pressing the enter key.

A computer using a graphical user interface presents menus with a combination of text and symbols to represent choices. By clicking on one of the symbols or text, the operator is selecting the instruction that the symbol represents. A context menu is a menu in which the choices presented to the operator are automatically modified according to the current context in which the operator is working.

A common use of menus is to provide convenient access to various operations such as saving or opening a file, quitting a program, or manipulating data. Most widget toolkits provide some form of pull-down or pop-up menu. Pull-down menus are the type commonly used in menu bars (usually near the top of a window or screen), which are most often used for performing actions, whereas pop-up (or "fly-out") menus are more likely to be used for setting a value, and might appear anywhere in a window.

According to traditional human interface guidelines, menu names were always supposed to be verbs, such as "file", "edit" and so on. [1] This has been largely ignored in subsequent user interface developments. A single-word verb however is sometimes unclear, and so as to allow for multiple word menu names, the idea of a vertical menu was invented, as seen in NeXTSTEP.

Menus are now also seen in consumer electronics, starting with TV sets and VCRs that gained on-screen displays in the early 1990s, and extending into computer monitors and DVD players. Menus allow the control of settings like tint, brightness, contrast, bass and treble, and other functions such as channel memory and closed captioning. Other electronics with text-only displays can also have menus, anything from business telephone systems with digital telephones, to weather radios that can be set to respond only to specific weather warnings in a specific area. Other more recent electronics in the 2000s also have menus, such as digital media players.

Menus are sometimes hierarchically organized, allowing navigation through different levels of the menu structure. Selecting a menu entry with an arrow will expand it, showing a second menu (the submenu) with options related to the selected entry.

Usability of submenus has been criticized as difficult, because of the narrow height that must be crossed by the pointer. The steering law predicts that this movement will be slow, and any error in touching the boundaries of the parent menu entry will hide the submenu. Some techniques proposed to alleviate these errors are keeping the submenu open while moving the pointer in diagonal, and using mega menus designed to enhance scannability and categorization of its contents. [2] [3]

In computer menu functions or buttons, an appended ellipsis ("…") means that upon selectR33333ion, another dialog will follow, where the user can or must make a choice. [4] If the ellipse is missing, the function will be executed upon selection. 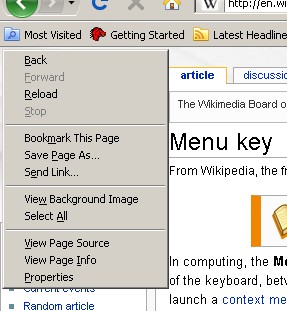 A pointing device is a human interface device that allows a user to input spatial data to a computer. CAD systems and graphical user interfaces (GUI) allow the user to control and provide data to the computer using physical gestures by moving a hand-held mouse or similar device across the surface of the physical desktop and activating switches on the mouse. Movements of the pointing device are echoed on the screen by movements of the pointer and other visual changes. Common gestures are point and click and drag and drop.

In user interface design, a pie menu is a circular context menu where selection depends on direction. It is a graphical control element. A pie menu is made of several "pie slices" around an inactive center and works best with stylus input, and well with a mouse. Pie slices are drawn with a hole in the middle for an easy way to exit the menu.

HyperTalk is a discontinued high-level, procedural programming language created in 1987 by Dan Winkler and used in conjunction with Apple Computer's HyperCard hypermedia program by Bill Atkinson. Because the main target audience of HyperTalk was beginning programmers, HyperTalk programmers were usually called "authors" and the process of writing programs was known as "scripting". HyperTalk scripts resembled written English and used a logical structure similar to that of the Pascal programming language.

In human–computer interaction and user interface design, cut, copy, and paste are related commands that offer an interprocess communication technique for transferring data through a computer's user interface. The cut command removes the selected data from its original position, while the copy command creates a duplicate; in both cases the selected data is kept in temporary storage. The data from the clipboard is later inserted wherever a paste command is issued. The data remains available to any application supporting the feature, thus allowing easy data transfer between applications. 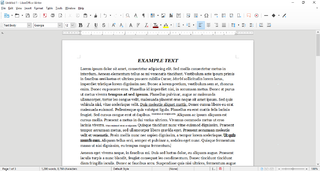 Common User Access (CUA) is a standard for user interfaces to operating systems and computer programs. It was developed by IBM and first published in 1987 as part of their Systems Application Architecture. Used originally in the MVS/ESA, VM/CMS, OS/400, OS/2 and Microsoft Windows operating systems, parts of the CUA standard are now implemented in programs for other operating systems, including variants of Unix. It is also used by Java AWT and Swing.

Compared with previous versions of Microsoft Windows, there are numerous features new to Windows Vista, covering most aspects of the operating system, which include additional management features, new aspects of security and safety, new I/O technologies, new networking features, and new technical features.

In computing and user interface engineering, a selection is a list of items on which user operations will take place. The user typically adds items to the list manually, although the computer may create a selection automatically.

Sublime Text is a commercial source code editor. It natively supports many programming languages and markup languages. Users can expand its functionality with plugins, typically community-built and maintained under free-software licenses. To facilitate plugins, Sublime Text features a Python API.