A file viewer is an application software that presents the data stored in a computer file in a human-friendly form. The file contents are generally displayed on the screen, or they may be printed. Also, they may be read aloud using speech synthesis.

File viewers do not edit files, yet it is common for them to be able to export data in a different file format, or to copy information from the viewed to the system-wide clipboard. A file viewer is limited-functionality software in the sense that it does not have a capability to create a file, or modify the content of an existing one. Instead, it is used only to display or print the content.

File viewers have to have sufficient knowledge about the file format to be viewed in order to handle different byte orders, code pages or newline styles.

Some file viewer may be classified as filters that translate binary files into plain text (one example antiword). However, depending on the competence of the translating routines, some information may be lost.

Image viewers display graphics files onscreen. Most viewers are capable of reading multiple graphics file formats but some such as JPEGview are dedicated to a single format. Common image viewer features include thumbnail preview and creation, and image zooming.

For more complex or proprietary file formats, file viewers are usually provided by the same companies that make the editing software using those formats. Viewers are usually distributed free of charge, while editors have to be bought. For example, the full version of Adobe Acrobat can be used to create content for most computer platforms. To ensure that people can access the documents created with Adobe Acrobat, the software publisher created a viewer program, the Acrobat Reader, and made it available for free. Microsoft also makes viewers for Word and PowerPoint documents freely available. These viewer applications allow the file format to be readable on all supported operating-systems, free of charge, making the commercial product a more attractive solution.

A web browser is a type of file viewer, which renders HTML markup into a human-friendly presentation. Although HTML is stored in plain text files, viewing an HTML file in a browser and in a text editor produces significantly different results. Web browsers may also be used to view image and multimedia files.

There are also types of data that are not intended for static display — these incorporate the time dimension. Viewers for such formats are named players. But the essence is the same — presenting file contents in human-friendly form (i.e. displaying video on the screen as intended, or playing sound through loudspeakers). And the same consideration of different file formats is present.

The Portable Document Format (PDF) is a file format developed by Adobe in 1993 to present documents, including text formatting and images, in a manner independent of application software, hardware, and operating systems. Based on the PostScript language, each PDF file encapsulates a complete description of a fixed-layout flat document, including the text, fonts, vector graphics, raster images and other information needed to display it. PDF was standardized as ISO 32000 in 2008, and no longer requires any royalties for its implementation.

Scalable Vector Graphics (SVG) is an Extensible Markup Language (XML)-based vector image format for two-dimensional graphics with support for interactivity and animation. The SVG specification is an open standard developed by the World Wide Web Consortium (W3C) since 1999.

Desktop publishing (DTP) is the creation of documents using page layout software on a personal ("desktop") computer. It was first used almost exclusively for print publications, but now it also assists in the creation of various forms of online content. Desktop publishing software can generate layouts and produce typographic-quality text and images comparable to traditional typography and printing. Desktop publishing is also the main reference for digital typography. This technology allows individuals, businesses, and other organizations to self-publish a wide variety of content, from menus to magazines to books, without the expense of commercial printing.

An electronic document is any electronic media content that is intended to be used in either an electronic form or as printed output. Originally, any computer data were considered as something internal — the final data output was always on paper. However, the development of computer networks has made it so that in most cases it is much more convenient to distribute electronic documents than printed ones. The improvements in electronic visual display technologies made it possible to view documents on screen instead of printing them. 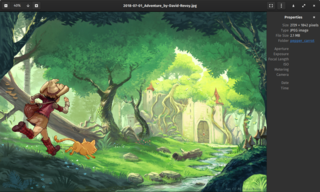 An image viewer or image browser is a computer program that can display stored graphical images; it can often handle various graphics file formats. Such software usually renders the image according to properties of the display such as color depth, display resolution, and color profile.

A binary file is a computer file that is not a text file. The term "binary file" is often used as a term meaning "non-text file". Many binary file formats contain parts that can be interpreted as text; for example, some computer document files containing formatted text, such as older Microsoft Word document files, contain the text of the document but also contain formatting information in binary form.

MHTML, an initialism of MIME encapsulation of aggregate HTML documents, is a web page archive format used to combine, in a single computer file, the HTML code and its companion resources that are represented by external hyperlinks in the web page's HTML code. The content of an MHTML file is encoded using the same techniques that were first developed for HTML email messages, using the MIME content type multipart/related. MHTML files use a .mhtml or .mht filename extension.

Microsoft WinHelp is a proprietary format for online help files that can be displayed by the Microsoft Help browser winhelp.exe or winhlp32.exe. The file format is based on Rich Text Format (RTF). It remained a popular Help platform from Windows 3.0 platform through Windows XP. WinHelp was removed in Windows Vista purportedly to discourage software developers from using the obsolete format and encourage use of newer help formats.

A number of vector graphics editors exist for various platforms. Potential users of these editors will make a comparison of vector graphics editors based on factors such as the availability for the user's platform, the software license, the feature set, the merits of the user interface (UI) and the focus of the program. Some programs are more suitable for artistic work while others are better for technical drawings. Another important factor is the application's support of various vector and bitmap image formats for import and export.

The Extensible Metadata Platform (XMP) is an ISO standard, originally created by Adobe Systems Inc., for the creation, processing and interchange of standardized and custom metadata for digital documents and data sets.

Rich Text Format Directory, also known as RTFD, or Rich Text Format with Attachments, is a primary document format of TextEdit, an application native to NeXTSTEP and OS X which has also been ported to other versions of Unix. The file format is based on the Rich Text Format, but can also include "attachments" such as images and animations. 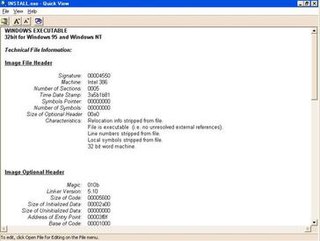 Quick View is a file viewer in Windows 95, Windows 98 and Windows NT 4.0 operating systems. The viewer can be used to view practically any file.

The following is a comparison of e-book formats used to create and publish e-books.

Preview is a computing function to display a document, page, or film before it is produced in its final form. In the case of printed material this is known as "print preview".

Xena is open-source software for use in digital preservation. Xena is short for XML Electronic Normalising for Archives.