The tooltip, also known as infotip or hint, is a common graphical user interface element in which, when hovering over a screen element or component, a text box displays information about that element (such as a description of a button's function, or what an abbreviation stands for). The tooltip is displayed continuously as long as the user hovers over the element. [1]

On desktop, it is used in conjunction with a cursor, usually a pointer, whereby the tooltip appears when a user hovers the pointer over an item without clicking it. [2] [3]

On mobile operating systems, a tooltip is displayed upon long-pressing—i.e., tapping and holding—an element. [1] Some smartphones have alternative input methods such as a stylus, which can show tooltips when hovering above the screen.

A common variant of tooltips, especially in older software, is displaying a description of the tool in a status bar.[ citation needed ] Microsoft's tooltips feature found in its end-user documentation is named ScreenTips. [4] The classic Mac Operating System uses a tooltips feature, though in a slightly different way, known as balloon help. [5] Some software and applications, such as GIMP, provide an option for users to turn off some or all tooltips. However, such options are left to the discretion of the developer, and are often not implemented.[ citation needed ]

The term tooltip originally came from older Microsoft applications (e.g., Microsoft Word 95). These applications would have toolbars wherein, when moving the mouse over the Toolbar icons, displayed a short description of the function of the tool in the toolbar. More recently, these tooltips are used in various parts of an interface, not only on toolbars.

Demonstrations of tooltip usage are prevalent on web pages. Many graphical web browsers display the title attribute of an HTML element as a tooltip when a user hovers the pointer over that element; in such a browser, when hovering over Wikipedia images and hyperlinks a tooltip will appear.

The Abbr template is an example of using tooltip inside Wikipedia, wherein the template shows the tooltip and the text. Another method is to use {{ Hover title }}.

Windows NT 3.51 is the third release of Microsoft's Windows NT line of operating systems. It was released on May 30, 1995, nine months after the release of Windows NT 3.5, and three months before the release of Windows 95. The most significant enhancement offered in this release was that it provides client/server support for inter-operating with Windows 95, which was released three months after NT 3.51. Windows NT 4.0 became its successor a year later. Support for NT 3.51 ended in 2001 and 2002 for the Workstation and Server editions, respectively. 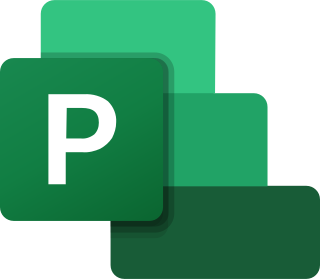 Microsoft Project is a project management software product, developed and sold by Microsoft. It is designed to assist a project manager in developing a schedule, assigning resources to tasks, tracking progress, managing the budget, and analyzing workloads.

In computing, a mouseover, mouse hover or hover box is a graphical control element that is activated when the user moves or hovers the pointer over a trigger area, usually with a mouse, but also possible with a digital pen. Mouseover control elements are common in web browsers. For example, hovering over a hyperlink triggers the mouseover control element to display a URL on the status bar. Site designers can define their own mouseover events using JavaScript or Cascading Style Sheets.

The alt attribute is the HTML attribute used in HTML and XHTML documents to specify alternative text that is to be rendered when the element to which it is applied cannot be rendered. 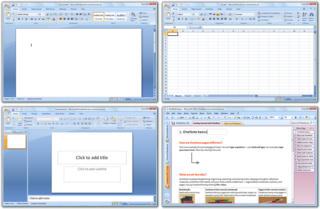 A hoverbox is a popup window that is neither a tooltip nor a traditional popup, but is a popup that appears when the mouse is placed over an icon on the screen for a short period of time, without clicking. The hoverbox provides web annotation tool which allows the reader of a web page to preview information outside of that webpage. 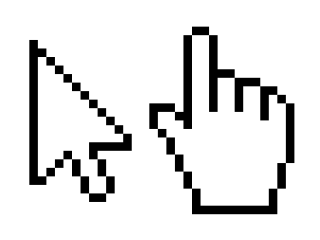 In computing, a pointer or mouse cursor is a symbol or graphical image on the computer monitor or other display device that echoes movements of the pointing device, commonly a mouse, touchpad, or stylus pen. It signals the point where actions of the user take place. It can be used in text-based or graphical user interfaces to select and move other elements. It is distinct from the cursor, which responds to keyboard input. The cursor may also be repositioned using the pointer.