An infobar is a graphical control element used by browsers including Firefox and Google Chrome [1] and other software programs to display non-critical information to a user. It usually appears as a temporary extension of an existing toolbar, and may contain buttons or icons to allow the user to react to the event described in the infobar.

An infobar may be used as an alternative to dialog boxes as it does not interrupt the user's activities and allows the user to read extra information in their own time. Some infobars unobtrusively appear from the edge of the screen with a message displayed, possibly with response buttons to then hide or fade after several seconds. [2]

Within Microsoft Outlook, an infobar may display information relevant to a specific type of email message, such as its sensitivity [3] or message format. [4] 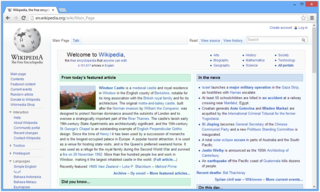 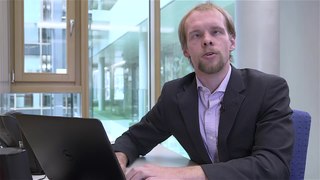 A screen reader is a form of assistive technology (AT) that renders text and image content as speech or braille output. Screen readers are essential to people who are blind, and are useful to people who are visually impaired, illiterate, or have a learning disability. Screen readers are software applications that attempt to convey what people with normal eyesight see on a display to their users via non-visual means, like text-to-speech, sound icons, or a Braille device. They do this by applying a wide variety of techniques that include, for example, interacting with dedicated accessibility APIs, using various operating system features, and employing hooking techniques.

Trident is a proprietary browser engine for the Microsoft Windows version of Internet Explorer, developed by Microsoft.

In computing, a theme is a preset package containing graphical appearance and functionality details. A theme usually comprises a set of shapes and colors for the graphical control elements, the window decoration and the window. Themes are used to customize the look and feel of a piece of computer software or of an operating system. 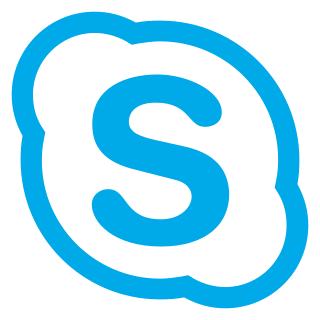 Skype for Business was an enterprise software application for instant messaging and videotelephony developed by Microsoft as part of the Microsoft Office suite. It is designed for use with the on-premises Skype for Business Server software, and a software as a service version offered as part of Office 365. It supports text, audio, and video chat, and integrates with Microsoft Office components such as Exchange and SharePoint.

Chrome Remote Desktop is a remote desktop software tool developed by Google that allows a user to remotely control another computer through a proprietary protocol developed by Google unofficially called "Chromoting". It transmits the keyboard and mouse events from one computer to another, relaying the graphical screen updates back in the other direction, over a network. This feature therefore consists of a server component for the host computer, and a client component on the computer accessing the remote computer.

A web beacon is a technique used on web pages and email to unobtrusively allow checking that a user has accessed some content. Web beacons are typically used by third parties to monitor the activity of users at a website for the purpose of web analytics or page tagging. They can also be used for email tracking. When implemented using JavaScript, they may be called JavaScript tags.

Google Docs is an online word processor included as part of the free, web-based Google Docs Editors suite offered by Google, which also includes Google Sheets, Google Slides, Google Drawings, Google Forms, Google Sites, and Google Keep. Google Docs is accessible via an internet browser as a web-based application and is also available as a mobile app on Android and iOS and as a desktop application on Google's Chrome OS.