A cycle button or toggle button is a graphical control element that allows the user to choose one from a predefined set of options. [1] It is used as a button, the content of which changes with each click and cycles between two or more values; [1] the currently displayed value is the user's choice.

A cycle button's advantage over radio buttons or a list box is that it takes less screen space; [1] its advantage over a drop-down list is that a single mouse click is enough to switch between the two options. The disadvantage is if the button has many options, many clicks are needed to switch to the desired one. This is why some GUI environments have the ability to display the same element as a cycle button or a drop-down list, depending on the number of options.[ citation needed ] 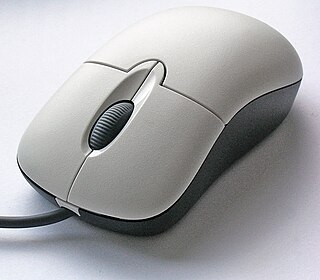 A computer mouse is a hand-held pointing device that detects two-dimensional motion relative to a surface. This motion is typically translated into the motion of a pointer on a display, which allows a smooth control of the graphical user interface of a computer. 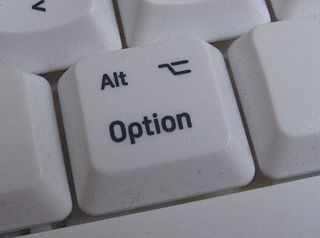 The Option key is a modifier key present on Apple keyboards. It is located between the Control key and Command key on a typical Mac keyboard. There are two Option keys on modern Mac desktop and notebook keyboards, one on each side of the space bar.

A drop-down list is a graphical control element, similar to a list box, that allows the user to choose one value from a list. When a drop-down list is inactive, it displays a single value. When activated, it displays a list of values, from which the user may select one. When the user selects a new value, the control reverts to its inactive state, displaying the selected value. It is often used in the design of graphical user interfaces, including web design.

Alt+Tab ↹ is the common name for a keyboard shortcut that has been in Microsoft Windows since Windows 3.0. This shortcut switches between application-level windows without using the mouse; hence it was named Task Switcher.

Computer-assisted web interviewing (CAWI) is an Internet surveying technique in which the interviewee follows a script provided in a website. The questionnaires are made in a program for creating web interviews. The program allows for the questionnaire to contain pictures, audio and video clips, links to different web pages, etc. The website is able to customize the flow of the questionnaire based on the answers provided, as well as information already known about the participant. It is considered to be a cheaper way of surveying since one doesn't need to use people to hold surveys unlike computer-assisted telephone interviewing. With the increasing use of the Internet, online questionnaires have become a popular way of collecting information. The design of an online questionnaire has a dramatic effect on the quality of data gathered. There are many factors in designing an online questionnaire; guidelines, available question formats, administration, quality and ethic issues should be reviewed. Online questionnaires should be seen as a sub-set of a wider-range of online research methods.