Last updated September 19, 2021
This article is about the computer interface element. For the concept in US tax law, see Check-the-box.

A checkbox (check box, tickbox, tick box) is a Graphical widget that permits the user to make a binary choice, i.e. a choice between one of two possible mutually exclusive options. For example, the user may have to answer 'yes' (checked) or 'no' (not checked) on a simple yes/no question.

Checkboxes are shown as ☐ when unchecked, or ☑7 or ☒ (depending on the GUI) when checked. A caption describing the meaning of the checkbox is normally shown adjacent to the checkbox. Inverting the state of a checkbox is done by clicking the mouse on the box, or the caption, or by using a keyboard shortcut, such as the space bar.

Often, a series of checkboxes is presented, each with a binary choice between two options. Then the user may select several of the choices. Contrasting is a radio button, in which only a single option is selectable from several mutually-exclusive choices.

Checkboxes may be disabled (indicated "greyed out") to inform the user of their existence and possible use despite of momentary unavailability.

Some applications use checkboxes that allow an indeterminate state in addition to the two provided by a normal checkbox. This third state is shown as a square or dash in the checkbox, and indicates that its state is neither checked nor unchecked. This is most often used when the checkbox is tied to a collection of items in mixed states. The indeterminate state cannot usually be selected by the user, and switches to a checked state when activated.

For example, a checkbox presented to select files to send via FTP might use a tree view so that files can be selected one at a time, or by folder. If only some of the files in a folder are selected, then the checkbox for that folder would be indeterminate. Clicking on this indeterminate checkbox would select all or, less commonly, none of the contained files. Continuing to click on the checkbox would alternate between checked (all sub-directories and files selected) and unchecked (no sub-directories or files selected).

Some tri-state checkbox implementations allow the user to toggle among all states, including the indeterminate state, by remembering the mixed state of the items in the collection. This serves as an undo feature.

Setting or clearing a checkbox changes the checkbox's state with no other side-effects. Violating this guideline by associating additional actions with the change of state frequently confuses users, because they are used to configuring data in entry controls such as text boxes, radio buttons, and checkboxes and then invoking an action control such as a push button to initiate the action to process the data. [1] [2]

One common exception is to enable or display additional user input elements whose relevance depends on the checkbox state. In other situations toggle switch is typically used instead of a checkbox.

In web forms, the HTML element <inputtype="checkbox"> is used to display a checkbox. 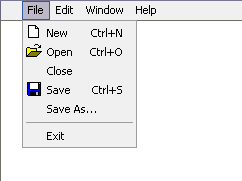 Microsoft Active Accessibility (MSAA) is an application programming interface (API) for user interface accessibility. MSAA was introduced as a platform add-on to Microsoft Windows 95 in 1997. MSAA is designed to help Assistive Technology (AT) products interact with standard and custom user interface (UI) elements of an application, as well as to access, identify, and manipulate an application's UI elements. AT products work with MSAA enabled applications in order to provide better access for individuals who have physical or cognitive difficulties, impairments, or disabilities. Some examples of AT products are screen readers for users with limited sight, on screen keyboards for users with limited physical access, or narrators for users with limited hearing. MSAA can also be used for automated testing tools, and computer-based training applications.

The Start menu is a graphical user interface element used in Microsoft Windows since Windows 95 and in some other operating systems. It provides a central launching point for computer programs and performing other tasks. It has different names in different operating systems and window managers, such as Kickoff Application Launcher in KDE, Dash in GNOME and Unity, and Start screen in Windows 8. 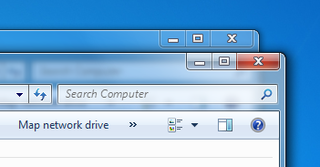 Microsoft InfoPath is a software application for designing, distributing, filling and submitting electronic forms containing structured data. Microsoft initially released InfoPath as part of the Microsoft Office 2003 family. The product features a WYSIWYG form designer in which the various controls are bound to data, represented separately as a hierarchical tree view of folders and data fields.

The Control Strip is a user interface component introduced in the "classic" System 7 Macintosh operating system. It currently exists as part of the Touch Bar interface in macOS.

A cycle button or toggle button is a graphical control element that allows the user to choose one from a predefined set of options. It is used as a button, the content of which changes with each click and cycles between two or more values; the currently displayed value is the user's choice.

Microsoft Photos is an image viewer, image organizer, raster graphics editor, photo sharing app, and video clip editor developed by Microsoft. It was first included in Windows 8 as a functional replacement for Windows Photo Viewer. Photos has Microsoft Sway integration and can use selected photos as a source for creating a Sway project. Users can also upload photos to OneDrive, Facebook, Twitter, Instagram and GroupMe for sharing.