In computer science, an opaque data type is a data type whose concrete data structure is not defined in an interface. This enforces information hiding, since its values can only be manipulated by calling subroutines that have access to the missing information. The concrete representation of the type is hidden from its users, and the visible implementation is incomplete. A data type whose representation is visible is called transparent. [1] Opaque data types are frequently used to implement abstract data types.

Typical examples of opaque data types include handles for resources provided by an operating system to application software. For example, the POSIX standard for threads defines an application programming interface based on a number of opaque types that represent threads or synchronization primitives like mutexes or condition variables. [2]

An opaque pointer is a special case of an opaque data type, a datatype that is declared to be a pointer to a record or data structure of some unspecified data type. For example, the standard library that forms part of the specification of the C programming language provides functions for file input and output that return or take values of type "pointer to FILE" that represent file streams (see C file input/output), but the concrete implementation of the type FILE is not specified. [3]

Some languages, such as C, allow the declaration of opaque records (structs), whose size and fields are hidden from the client. The only thing that the client can do with an object of such a type is to take its memory address, to produce an opaque pointer.

If the information provided by the interface is sufficient to determine the type's size, then clients can declare variables, fields, and arrays of that type, assign their values, and possibly compare them for equality. This is usually the case for opaque pointers.

In some languages, such as Java, the only kind of opaque type provided is the opaque pointer. Indeed, in Java (and several other languages) records are always handled through pointers.

Some languages allow partially opaque types, e.g. a record which has some public fields, known and accessible to all clients, and some hidden fields which are not revealed in the interface. Such types play a fundamental role in object-oriented programming.

The information which is missing in the interface may be declared in its implementation, or in another "friends-only" interface. This second option allows the hidden information to be shared by two or more modules.

In object-oriented programming, a class is an extensible program-code-template for creating objects, providing initial values for state and implementations of behavior. In many languages, the class name is used as the name for the class, the name for the default constructor of the class, and as the type of objects generated by instantiating the class; these distinct concepts are easily conflated. Although, to the point of conflation, one could argue that is a feature inherent in a language because of its polymorphic nature and why these languages are so powerful, dynamic and adaptable for use compared to languages without polymorphism present. Thus they can model dynamic systems more easily.

In object-oriented programming (OOP), encapsulation refers to the bundling of data with the methods that operate on that data, or the restricting of direct access to some of an object's components. Encapsulation is used to hide the values or state of a structured data object inside a class, preventing direct access to them by clients in a way that could expose hidden implementation details or violate state invariance maintained by the methods.

In computer science, a reference is a value that enables a program to indirectly access a particular datum, such as a variable's value or a record, in the computer's memory or in some other storage device. The reference is said to refer to the datum, and accessing the datum is called dereferencing the reference. 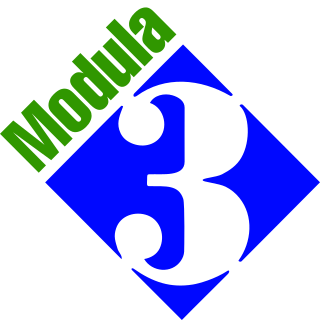 Modula-3 is a programming language conceived as a successor to an upgraded version of Modula-2 known as Modula-2+. While it has been influential in research circles it has not been adopted widely in industry. It was designed by Luca Cardelli, James Donahue, Lucille Glassman, Mick Jordan, Bill Kalsow and Greg Nelson at the Digital Equipment Corporation (DEC) Systems Research Center (SRC) and the Olivetti Research Center (ORC) in the late 1980s.

In computer science, message queues and mailboxes are software-engineering components typically used for inter-process communication (IPC), or for inter-thread communication within the same process. They use a queue for messaging – the passing of control or of content. Group communication systems provide similar kinds of functionality.

The GLib Object System, or GObject, is a free software library providing a portable object system and transparent cross-language interoperability. GObject is designed for use both directly in C programs to provide object-oriented C-based APIs and through bindings to other languages to provide transparent cross-language interoperability, e.g. PyGObject.

In computer programming, an opaque pointer is a special case of an opaque data type, a data type declared to be a pointer to a record or data structure of some unspecified type.

In computer programming, a declaration is a language construct that specifies properties of an identifier: it declares what a word (identifier) "means". Declarations are most commonly used for functions, variables, constants, and classes, but can also be used for other entities such as enumerations and type definitions. Beyond the name and the kind of entity, declarations typically specify the data type, or the type signature ; types may also include dimensions, such as for arrays. A declaration is used to announce the existence of the entity to the compiler; this is important in those strongly typed languages that require functions, variables, and constants, and their types to be specified with a declaration before use, and is used in forward declaration. The term "declaration" is frequently contrasted with the term "definition", but meaning and usage varies significantly between languages; see below.

In object-oriented programming, the dispose pattern is a design pattern for resource management. In this pattern, a resource is held by an object, and released by calling a conventional method – usually called close, dispose, free, release depending on the language – which releases any resources the object is holding onto. Many languages offer language constructs to avoid having to call the dispose method explicitly in common situations.

In computer science, marshalling or marshaling is the process of transforming the memory representation of an object into a data format suitable for storage or transmission. It is typically used when data must be moved between different parts of a computer program or from one program to another.

Component Object Model (COM) is a binary-interface standard for software components introduced by Microsoft in 1993. It is used to enable inter-process communication object creation in a large range of programming languages. COM is the basis for several other Microsoft technologies and frameworks, including OLE, OLE Automation, Browser Helper Object, ActiveX, COM+, DCOM, the Windows shell, DirectX, UMDF and Windows Runtime. The essence of COM is a language-neutral way of implementing objects that can be used in environments different from the one in which they were created, even across machine boundaries. For well-authored components, COM allows reuse of objects with no knowledge of their internal implementation, as it forces component implementers to provide well-defined interfaces that are separated from the implementation. The different allocation semantics of languages are accommodated by making objects responsible for their own creation and destruction through reference-counting. Type conversion casting between different interfaces of an object is achieved through the QueryInterface method. The preferred method of "inheritance" within COM is the creation of sub-objects to which method "calls" are delegated.

In computer programming, a constant is a value that should not be altered by the program during normal execution, i.e., the value is constant. When associated with an identifier, a constant is said to be "named," although the terms "constant" and "named constant" are often used interchangeably. This is contrasted with a variable, which is an identifier with a value that can be changed during normal execution, i.e., the value is variable. Constants are useful for both programmers and compilers: For programmers they are a form of self-documenting code and allow reasoning about correctness, while for compilers they allow compile-time and run-time checks that verify that constancy assumptions are not violated, and allow or simplify some compiler optimizations.

An application programming interface (API) is a computing interface that defines interactions between multiple software or mixed hardware-software intermediaries. It defines the kinds of calls or requests that can be made, how to make them, the data formats that should be used, the conventions to follow, etc. It can also provide extension mechanisms so that users can extend existing functionality in various ways and to varying degrees. An API can be entirely custom, specific to a component, or designed based on an industry-standard to ensure interoperability. Through information hiding, APIs enable modular programming, allowing users to use the interface independently of the implementation.