The basic idea behind this method is to develop a system through repeated cycles (iterative) and in smaller portions at a time (incremental), allowing software developers to take advantage of what was learned during development of earlier parts or versions of the system. Learning comes from both the development and use of the system, where possible key steps in the process start with a simple implementation of a subset of the software requirements and iteratively enhance the evolving versions until the full system is implemented. At each iteration, design modifications are made and new functional capabilities are added. [3]

The procedure itself consists of the initialization step, the iteration step, and the Project Control List. The initialization step creates a base version of the system. The goal for this initial implementation is to create a product to which the user can react. It should offer a sampling of the key aspects of the problem and provide a solution that is simple enough to understand and implement easily. To guide the iteration process, a project control list is created that contains a record of all tasks that need to be performed. It includes items such as new features to be implemented and areas of redesign of the existing solution. The control list is constantly being revised as a result of the analysis phase.

The iteration involves the redesign and implementation of iteration is to be simple, straightforward, and modular, supporting redesign at that stage or as a task added to the project control list.[ clarification needed ] The level of design detail is not dictated by the iterative approach. In a light-weight iterative project the code may represent the major source of documentation of the system; however, in a critical iterative project a formal Software Design Document may be used. The analysis of an iteration is based upon user feedback, and the program analysis facilities available. It involves analysis of the structure, modularity, usability, reliability, efficiency, & achievement of goals. The project control list is modified in light of the analysis results.

Incremental development slices the system functionality into increments (portions). In each increment, a slice of functionality is delivered through cross-discipline work, from the requirements to the deployment. The Unified Process groups increments/iterations into phases: inception, elaboration, construction, and transition.

Each of the phases may be divided into 1 or more iterations, which are usually time-boxed rather than feature-boxed. Architects and analysts work one iteration ahead of developers and testers to keep their work-product backlog full.

Many examples of early usage are provided in Craig Larman and Victor Basili's article "Iterative and Incremental Development: A Brief History", [4] with one of the earliest being NASA's 1960s Project Mercury.

Some of those Mercury engineers later formed a new division within IBM, where "another early and striking example of a major IID success [was] the very heart of NASA’s space shuttle software—the primary avionics software system, which [they] built from 1977 to 1980. The team applied IID in a series of 17 iterations over 31 months, averaging around eight weeks per iteration. Their motivation for avoiding the waterfall life cycle was that the shuttle program’s requirements changed during the software development process." [4]

Some organizations, such as the US Department of Defense, have a preference for iterative methodologies, starting with MIL-STD-498 "clearly encouraging evolutionary acquisition and IID".

The DoD Instruction 5000.2 released in 2000 stated a clear preference for IID:

There are two approaches, evolutionary and single step [waterfall], to full capability. An evolutionary approach is preferred. … [In this] approach, the ultimate capability delivered to the user is divided into two or more blocks, with increasing increments of capability...software development shall follow an iterative spiral development process in which continually expanding software versions are based on learning from earlier development. It can also be done in phases.

Recent revisions to DoDI 5000.02 no longer refer to "spiral development," but do advocate the general approach as a baseline for software-intensive development/procurement programs. [5] In addition, the United States Agency for International Development (USAID) also employs an iterative and incremental developmental approach to its programming cycle to design, monitor, evaluate, learn and adapt international development projects with a project management approach that focuses on incorporating collaboration, learning, and adaptation strategies to iterate and adapt programming. [6]

The main cause of the software development projects failure is the choice of the model, so should be made with a great care.[ vague ] [7]

For example, the Waterfall development paradigm completes the project-wide work-products of each discipline in one step before moving on to the next discipline in a succeeding step. Business value is delivered all at once, and only at the very end of the project, whereas backtracking[ clarification needed ] is possible in an iterative approach. Comparing the two approaches, some patterns begin to emerge:[ citation needed ]

Guidelines that drive software implementation and analysis include:[ citation needed ]

Use in hardware and embedded systems

Examples of this may be seen in a number of industries. One sector that has recently been substantially affected by this shift of thinking has been the space launch industry, with substantial new competitive forces at work brought about by faster and more extensive technology innovation brought to bear by the formation of private companies pursuing space launch. These companies, such as SpaceX [8] and Rocket Lab [9] , are now both providing commercial orbital launch services in the past decade, something that only six nations had done prior to a decade [10] ago. New innovation in technology development approaches, pricing, and service offerings—including the ability that has existed only since 2016 to fly to space on a previously-flown (reusable) booster stage—further decreasing the price of obtaining access to space. [11] [8]

SpaceX has been explicit about its effort to bring iterative design practices into the space industry, and uses the technique on spacecraft, launch vehicles, electronics and avionics, and operational flight hardware operations. [12]

As the industry has begun to change, other launch competitors are beginning to change their long-term development practices with government agencies as well. For example, the large US launch service provider United Launch Alliance (ULA) began in 2015 a decade-long project to restructure its launch business—reducing two lau nch vehicles to one—using an iterative and incremental approach to get to a partially-reusable and much lower-cost launch system over the next decade. [13]

The waterfall model is a breakdown of project activities into linear sequential phases, where each phase depends on the deliverables of the previous one and corresponds to a specialisation of tasks. The approach is typical for certain areas of engineering design. In software development, it tends to be among the less iterative and flexible approaches, as progress flows in largely one direction through the phases of conception, initiation, analysis, design, construction, testing, deployment and maintenance. 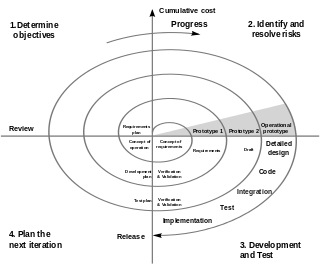 The spiral model is a risk-driven software development process model. Based on the unique risk patterns of a given project, the spiral model guides a team to adopt elements of one or more process models, such as incremental, waterfall, or evolutionary prototyping. 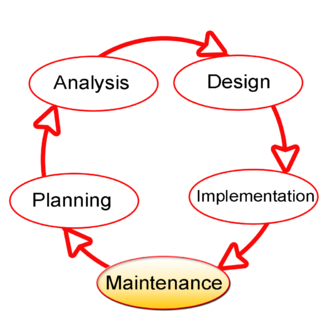 Agile software development comprises various approaches to software development under which requirements and solutions evolve through the collaborative effort of self-organizing and cross-functional teams and their customer(s)/end user(s). It advocates adaptive planning, evolutionary development, early delivery, and continual improvement, and it encourages rapid and flexible response to change. 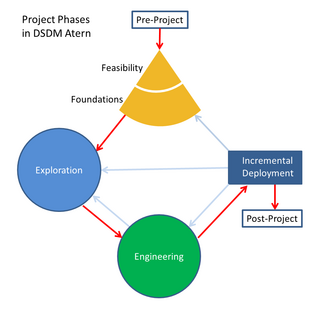 Software prototyping is the activity of creating prototypes of software applications, i.e., incomplete versions of the software program being developed. It is an activity that can occur in software development and is comparable to prototyping as known from other fields, such as mechanical engineering or manufacturing.

Iterative design is a design methodology based on a cyclic process of prototyping, testing, analyzing, and refining a product or process. Based on the results of testing the most recent iteration of a design, changes and refinements are made. This process is intended to ultimately improve the quality and functionality of a design. In iterative design, interaction with the designed system is used as a form of research for informing and evolving a project, as successive versions, or iterations of a design are implemented.

A product software implementation method is a systematically structured approach to effectively integrate a software based service or component into the workflow of an organizational structure or an individual end-user.

Cap Gemini SDM, or SDM2 is a software development method developed by the software company Pandata in the Netherlands in 1970. The method is a waterfall model divided in seven phases that have a clear start and end. Each phase delivers subproducts, called milestones. It was used extensively in the Netherlands for ICT projects in the 1980s and 1990s. Pandata was purchased by the Capgemini group in the 1980s, and the last version of SDM to be published in English was SDM2 in 1991 by Cap Gemini Publishing BV. The method was regularly taught and distributed among Capgemini consultants and customers, until the waterfall method slowly went out of fashion in the wake of more iterative extreme programming methods such as Rapid application development, Rational Unified Process and Agile software development. 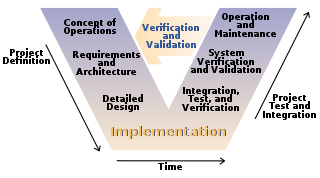 Agile Business Intelligence (BI) refers to the use of Agile software development for BI projects to reduce the time it takes for traditional BI to show value to the organization, and to help in quickly adapting to changing business needs. Agile BI enables the BI team and managers to make better business decisions, and to start doing this more quickly.

Evolutionary database design involves incremental improvements to the database schema so that it can be continuously updated with changes, reflecting the customer's requirements. People across the globe work on the same piece of software at the same time hence, there is a need for techniques that allow a smooth evolution of database as the design develops. Such methods utilize automated refactoring and continuous integration so that it supports agile methodologies for software development. These development techniques are applied on systems that are in pre-production stage as well on systems that have already been released. These techniques not only cover relevant changes in the database schema according to customer's changing needs, but also migration of modified data into the database and also customizing the database access code accordingly without changing the data semantics.