Model-driven engineering (MDE) is a software development methodology that focuses on creating and exploiting domain models, which are conceptual models of all the topics related to a specific problem. Hence, it highlights and aims at abstract representations of the knowledge and activities that govern a particular application domain, rather than the computing (i.e. algorithmic) concepts.

The MDE approach is meant to increase productivity by maximizing compatibility between systems (via reuse of standardized models), simplifying the process of design (via models of recurring design patterns in the application domain), and promoting communication between individuals and teams working on the system (via a standardization of the terminology and the best practices used in the application domain).

A modeling paradigm for MDE is considered effective if its models make sense from the point of view of a user that is familiar with the domain, and if they can serve as a basis for implementing systems. The models are developed through extensive communication among product managers, designers, developers and users of the application domain. As the models approach completion, they enable the development of software and systems.

Some of the better known MDE initiatives are:

The US government got involved in the modeling definitions creating the IDEF specifications. With several variations of the modeling definitions (see Booch, Rumbaugh, Jacobson, Gane and Sarson, Harel, Shlaer and Mellor, and others) they were eventually joined creating the Unified Modeling Language (UML). Rational Rose, a product for UML implementation, was done by Rational Corporation (Booch) responding automation yield higher levels of abstraction in software development. This abstraction promotes simpler models with a greater focus on problem space. Combined with executable semantics this elevates the total level of automation possible. The Object Management Group (OMG) has developed a set of standards called model-driven architecture (MDA), building a foundation for this advanced architecture-focused approach.

According to Douglas C. Schmidt, model-driven engineering technologies offer a promising approach to address the inability of third-generation languages to alleviate the complexity of platforms and express domain concepts effectively. [2] 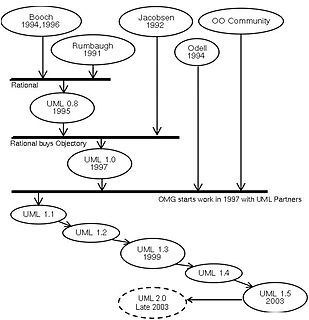 The Object Constraint Language (OCL) is a declarative language describing rules applying to Unified Modeling Language (UML) models developed at IBM and is now part of the UML standard. Initially, OCL was merely a formal specification language extension for UML. OCL may now be used with any Meta-Object Facility (MOF) Object Management Group (OMG) meta-model, including UML. The Object Constraint Language is a precise text language that provides constraint and object query expressions on any MOF model or meta-model that cannot otherwise be expressed by diagrammatic notation. OCL is a key component of the new OMG standard recommendation for transforming models, the Queries/Views/Transformations (QVT) specification.

Round-trip engineering (RTE) is a functionality of software development tools that synchronizes two or more related software artifacts, such as, source code, models, configuration files, and even documentation. The need for round-trip engineering arises when the same information is present in multiple artifacts and therefore an inconsistency may occur if not all artifacts are consistently updated to reflect a given change. For example, some piece of information was added to/changed in only one artifact and, as a result, it became missing in/inconsistent with the other artifacts. 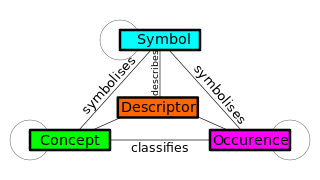 The VIATRA framework is the core of a transformation-based verification and validation environment for improving the quality of systems designed using the Unified Modeling Language by automatically checking consistency, completeness, and dependability requirements. 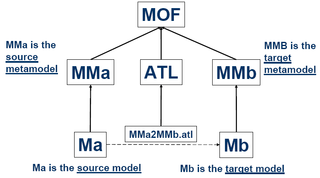 ATL is a model transformation language and toolkit developed and maintained by OBEO and AtlanMod. It was initiated by the AtlanMod team. In the field of Model-Driven Engineering (MDE), ATL provides ways to produce a set of target models from a set of source models. 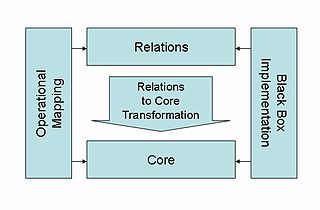 QVT (Query/View/Transformation) is a standard set of languages for model transformation defined by the Object Management Group.

Syntropy is a second-generation object-oriented analysis and software design method developed at Object Designers Limited in the UK during the early 1990s. The goal in developing Syntropy was to provide a set of modelling techniques that would allow precise specification and would keep separate different areas of concern. The approach was to take established techniques, as found in methods such as the Object-modeling technique and Booch method, and reposition and refine them. In recognition that graphical notations were much favoured by the market but lacked rigour, Syntropy adopted ideas from formal specification languages, specifically Z notation, to provide tools for both precise definition of the graphical notations and for the construction of richer models than are possible with pictures alone.

The UML profile for Enterprise Distributed Object Computing (EDOC) is a standard of the Object Management Group in support of open distributed computing using model-driven architecture and service-oriented architecture. Its aim is to simplify the development of component based (EDOC) systems by providing a UML-based modeling framework conforming to the MDA of the OMG.

Domain-driven design (DDD) is an approach to software development for complex needs by connecting the implementation to an evolving model.

The first version of the Enterprise Collaboration Architecture (ECA) has been published by the Object Management Group (OMG) in 2001. The vision of the (ECA) is to simplify the development of component based and services oriented systems by providing a modeling framework aligned with the model-driven architecture (MDA) of the Object Management Group (OMG). 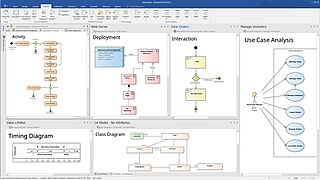