Last updated April 24, 2021
Computer program that software developers use to support other programs and applications

A programming tool or software development tool is a computer program that software developers use to create, debug, maintain, or otherwise support other programs and applications. The term usually refers to relatively simple programs, that can be combined together to accomplish a task, much as one might use multiple hands to fix a physical object. The most basic tools are a source code editor and a compiler or interpreter, which are used ubiquitously and continuously. Other tools are used more or less depending on the language, development methodology, and individual engineer,often used for a discrete task, like a debugger or profiler. Tools may be discrete programs, executed separately – often from the command line – or may be parts of a single large program, called an integrated development environment (IDE). In many cases, particularly for simpler use, simple ad hoc techniques are used instead of a tool, such as print debugging instead of using a debugger, manual timing (of overall program or section of code) instead of a profiler, or tracking bugs in a text file or spreadsheet instead of a bug tracking system.

The distinction between tools and applications is murky. For example, developers use simple databases (such as a file containing a list of important values) all the time as tools.[ dubious – discuss ] However a full-blown database is usually thought of as an application or software in its own right. For many years, computer-assisted software engineering (CASE) tools were sought after. Successful tools have proven elusive. In one sense, CASE tools emphasized design and architecture support, such as for UML. But the most successful of these tools are IDEs.

Translating from human to computer language

Modern computers are very complex and in order to productively program them, various abstractions are needed. For example, rather than writing down a program's binary representation a programmer will write a program in a programming language like C, Java or Python. Programming tools like assemblers, compilers and linkers translate a program from a human write-able and readable source language into the bits and bytes that can be executed by a computer. Interpreters interpret the program on the fly to produce the desired behavior.

These programs perform many well defined and repetitive tasks that would nonetheless be time consuming and error-prone when performed by a human, like laying out parts of a program in memory and fixing up the references between parts of a program as a linker does. Optimizing compilers on the other hand can perform complex transformations on the source code in order to improve the execution speed or other characteristics of a program. This allows a programmer to focus more on higher level, conceptual aspects of a program without worrying about the details of the machine it is running on.

Because of the high complexity of software, it is not possible to understand most programs at a single glance even for the most experienced software developer. The abstractions provided by high-level programming languages also make it harder to understand the connection between the source code written by a programmer and the actual program's behaviour. In order to find bugs in programs and to prevent creating new bugs when extending a program, a software developer uses some programming tools to visualize all kinds of information about programs.

For example, a debugger allows a programmer to extract information about a running program in terms of the source language used to program it. The debugger can compute the value of a variable in the source program from the state of the concrete machine by using information stored by the compiler. Memory debuggers can directly point out questionable or outright wrong memory accesses of running programs which may otherwise remain undetected and are a common source of program failures.

Software tools come in many forms:

Integrated development environments combine the features of many tools into one package. They for example make it easier to do specific tasks, such as searching for content only in files in a particular project. IDEs may for example be used for development of enterprise-level applications.

Different aspects of IDEs for specific programming languages can be found in this comparison of integrated development environments. 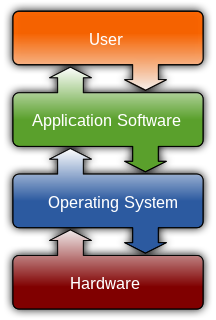 Software is a collection of instructions and data that tell a computer how to work. This is in contrast to physical hardware, from which the system is built and actually performs the work. In computer science and software engineering, computer software is all information processed by computer systems, including programs and data. Computer software includes computer programs, libraries and related non-executable data, such as online documentation or digital media. Computer hardware and software require each other and neither can be realistically used on its own.

Computer programming is the process of designing and building an executable computer program to accomplish a specific computing result or to perform a specific task. Programming involves tasks such as: analysis, generating algorithms, profiling algorithms' accuracy and resource consumption, and the implementation of algorithms in a chosen programming language. The source code of a program is written in one or more languages that are intelligible to programmers, rather than machine code, which is directly executed by the central processing unit. The purpose of programming is to find a sequence of instructions that will automate the performance of a task on a computer, often for solving a given problem. Proficient programming thus often requires expertise in several different subjects, including knowledge of the application domain, specialized algorithms, and formal logic.

A software bug is an error, flaw or fault in a computer program or system that causes it to produce an incorrect or unexpected result, or to behave in unintended ways. The process of finding and fixing bugs is termed "debugging" and often uses formal techniques or tools to pinpoint bugs, and since the 1950s, some computer systems have been designed to also deter, detect or auto-correct various computer bugs during operations. 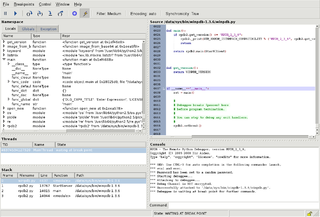 A debugger or debugging tool is a computer program used to test and debug other programs. The main use of a debugger is to run the target program under controlled conditions that permit the programmer to track its operations in progress and monitor changes in computer resources that may indicate malfunctioning code. Typical debugging facilities include the ability to run or halt the target program at specific points, display the contents of memory, CPU registers or storage devices, and modify memory or register contents in order to enter selected test data that might be a cause of faulty program execution.

In computing, code generation is the process by which a compiler's code generator converts some intermediate representation of source code into a form that can be readily executed by a machine. 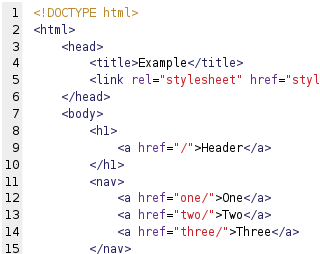 Syntax highlighting is a feature of text editors that are used for programming, scripting, or markup languages, such as HTML. The feature displays text, especially source code, in different colours and fonts according to the category of terms. This feature facilitates writing in a structured language such as a programming language or a markup language as both structures and syntax errors are visually distinct. This feature is also employed in many programming related contexts, either in the form of colorful books or online websites to make understanding code snippets easier for readers. Highlighting does not affect the meaning of the text itself; it is intended only for human readers.

Macintosh Programmer's Workshop (MPW) is a software development environment for the Classic Mac OS operating system, written by Apple Computer. For Macintosh developers, it was one of the primary tools for building applications for System 7.x and Mac OS 8.x and 9.x. Initially MPW was available for purchase as part of Apple's professional developers program, but Apple made it a free download after it was superseded by CodeWarrior. On Mac OS X it was replaced by the Project Builder IDE, which eventually became Xcode.

PurifyPlus is a memory debugger program used by software developers to detect memory access errors in programs, especially those written in C or C++. It was originally written by Reed Hastings of Pure Software. Pure Software later merged with Atria Software to form Pure Atria Software, which in turn was later acquired by Rational Software, which in turn was acquired by IBM, and then divested to UNICOM Systems, Inc. on Dec 31, 2014. It is functionally similar to other memory debuggers, such as Insure++, Valgrind and BoundsChecker.

The following outline is provided as an overview of and topical guide to computer programming:

CodeLite is a free and open-source IDE for the C, C++, PHP, and JavaScript (Node.js) programming languages.

The following outline is provided as an overview of and topical guide to software: