Three Days of Life and Death

Three Days of Life and Death (German: Drei Tage auf Leben und Tod) is a 1929 German silent war film directed by Heinz Paul and starring Carl de Vogt, Angelo Ferrari and Carl Walther Meyer. [1] It was shot at the Johannisthal Studios in Berlin and on location in Cartagena in Spain and around the Adriatic Sea. The film's sets were designed by the art director Karl Machus. 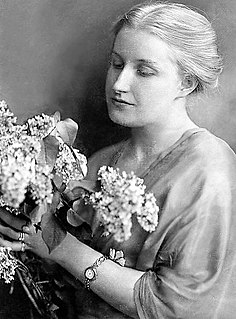 Thea Gabriele von Harbou was a German screenwriter, novelist, film director, and actress. She is remembered as the screenwriter of the science fiction film classic Metropolis (1927) and for the 1925 novel on which it was based. Harbou collaborated as a screenwriter with film director Fritz Lang, her husband, during the period of transition from silent to sound films.

Carl Wilhelm, was a prolific German film director, film producer and screenwriter of the silent film era, at the end of which his career apparently entirely faded away and he vanished into obscurity. 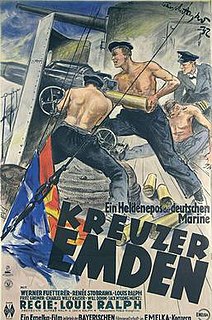 Cruiser Emden is a 1932 German war film directed by Louis Ralph and starring Ralph, Renée Stobrawa, Hans Schlenck, and Werner Fuetterer. It was shot at the Emelka Studios in Munich. It is a remake of a 1926 silent film Our Emden which had also been directed by Ralph. The film depicts the German First World War cruiser SMS Emden.

Road to Rio is a 1931 German crime film directed by Manfred Noa and starring Maria Matray, Oskar Homolka and Oskar Marion. It premiered on 15 January 1931. It was shot at the Babelsberg Studios in Potsdam. The film's sets were designed by the art directors Hans Sohnle and Otto Erdmann.

The Transformation of Dr. Bessel is a 1927 German silent film directed by Richard Oswald and starring Jakob Tiedtke, Sophie Pagay and Hans Stüwe. The film was based on a novel by Ludwig Wolff. It premiered at the Ufa-Palast am Zoo. It has thematic similarities with Ernst Lubitsch's 1932 film The Man I Killed. Whereas that film featured a French soldier partially assuming the identity of a dead German, in Oswald's film a German is able to survive by pretending to be French. 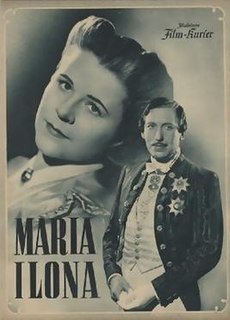 Maria Ilona is a 1939 German historical drama film directed by Géza von Bolváry and starring Paula Wessely, Willy Birgel, and Paul Hörbiger. The film is set in Austria during the reign of Ferdinand I. It is an adaptation of Oswald Richter-Tersik's novel Ilona Beck. 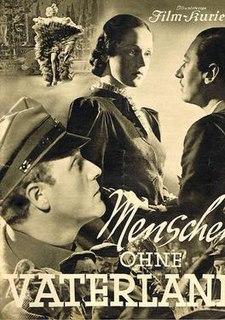 Men Without a Fatherland is a 1937 German drama film directed by Herbert Maisch and starring Willy Fritsch, Maria von Tasnady and Willy Birgel.

Comrades at Sea is a 1938 German war film directed by Heinz Paul and starring Theodor Loos, Ingeborg Hertel and Julius Brandt. The film is set during the Spanish Civil War, which it portrays as a Communist uprising against the lawful government.

We'll Meet Again at Home is a 1926 German silent film directed by Leo Mittler and Reinhold Schünzel. It shares its name with a popular song title. 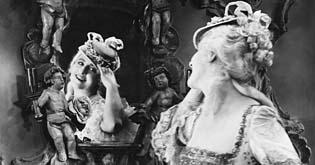 My Aunt, Your Aunt is a 1927 German silent comedy film directed by Carl Froelich and starring Ralph Arthur Roberts, Angelo Ferrari and Henny Porten. It was shot at the Tempelhof Studios in Berlin and premiered at the city's Ufa-Palast am Zoo. The film's sets were designed by the art director Franz Schroedter. It was made by the leading German studio of the era UFA GmbH and distributed as part of the Parufamet agreement. 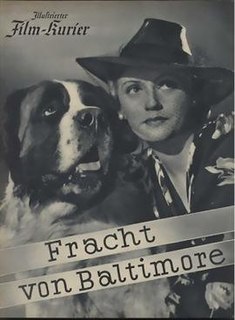 U-9 Weddigen is a 1927 German silent war film directed by Heinz Paul and starring Carl de Vogt, Mathilde Sussin and Fritz Alberti. The film is based on the exploits of the submarine SM U-9 under the command of Otto Weddigen during the First World War. It is similar in theme to the previous year's Our Emden, which also depicted the Imperial German Navy in heroic terms.

The Große Deutsche Kunstausstellung was held a total of eight times from 1937 to 1944 in the purpose-built Haus der Deutschen Kunst in Munich. It was representative of art under National Socialism.

A Man Astray is a 1940 German comedy adventure film directed by Herbert Selpin and starring Hans Albers, Charlotte Thiele and Hilde Weissner. The film is an adaptation of the 1938 novel Percy auf Abwegen by Hans Zehrer. It was shot at the Halensee Studios in Berlin and the Bavaria Studios in Munich. Location shooting took place around Lake Starnberg in Bavaria. The film's sets were designed by the art directors Paul Markwitz and Fritz Maurischat. A financial success, it was produced and distributed by Tobis Film, one of Nazi Germany's leading film companies.