The three governors controversy was a political crisis in the State of Georgia from 1946 to 1947. On December 21, 1946, Eugene Talmadge, the governor-elect of Georgia, died before taking office. The state constitution did not specify who would assume the governorship in such a situation, so three men made claims to the governorship: Ellis Arnall, the outgoing governor; Melvin E. Thompson, the lieutenant governor-elect; and Herman Talmadge, Eugene Talmadge's son. Eventually a ruling by the Supreme Court of Georgia settled the matter in favor of Thompson. Georgia's Secretary of State Ben Fortson hid the state seal in his wheelchair so no official business could be conducted until the controversy was settled.

Arnall stated that he would remain in office until his successor was properly sworn in, while Thompson said that he should be sworn in as governor in Eugene Talmadge's place, upon his swearing-in as lieutenant governor. Eugene Talmadge's supporters had been unsure of his chances of surviving until he was sworn in, so they did some research into the state constitution and concluded that if he died, the Georgia General Assembly would choose between the second and third-place finishers. As Talmadge ran unopposed, they secretly arranged for some write-in votes for Eugene's son, Herman Talmadge, who had run his father's successful campaign for governor.

Thompson wanted the General Assembly to certify the election returns before addressing the issue of who should be governor. Once the certification was done, Thompson would have a stronger claim, as he would officially be the Lieutenant Governor-elect, but Talmadge's forces were successful in postponing the certification. [1] On January 15, 1947, the General Assembly elected Herman Talmadge as governor.

Both Arnall and Thompson refused to accept the vote by the General Assembly. Thompson began legal proceedings, appealing to the Supreme Court of Georgia. Arnall physically refused to leave, so on January 15, 1947, both Talmadge and Arnall sat in the Georgia State Capitol claiming to be the governor. [2] The next day, Talmadge took control of the governor's office and arranged to have the locks changed. Arnall soon relinquished his claim and supported Thompson's claim.

The state's highest court, the Supreme Court of Georgia, ruled in March 1947 that the legislature had violated the state constitution by electing Talmadge governor and that Thompson should serve as governor until the next general election in November 1948. The court directed that in November 1948 there would be a special election at which voters would choose someone to complete Eugene Talmadge's term.

Following the court's decision, Herman Talmadge ceded the office of governor to Thompson, ending the controversy. Talmadge then ran for governor in 1948, defeating Governor Thompson for the Democratic nomination with 51.8% of the votes to Thompson's 45.1%. Talmadge then went on to win the November special election with 97.51% of the vote. [3] He served the final 26 months (November 1948 to January 1951) of the term for which his father had been elected, and was elected for a further full term in November 1950. 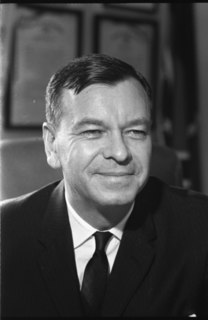 Herman Eugene Talmadge was an American politician who served as governor of Georgia in 1947 and from 1948 to 1955 and as a U.S. Senator from Georgia from 1957 to 1981. Talmadge, a Democrat, served during a time of political transition, both in Georgia and nationally. Talmadge began his career as a staunch segregationist and was known for his opposition to civil rights, ordering schools to be closed rather than desegregated. By the later stages of his career, however, Talmadge had modified his earlier views. His life eventually encapsulated the emergence of his native Georgia from entrenched white supremacy into a political culture where white voters regularly elect black Congressmen.

Eugene Talmadge was an attorney and American politician who served three terms as the 67th governor of Georgia, from 1933 to 1937, and then again from 1941 to 1943. Elected to a fourth term in November 1946, he died before his inauguration, scheduled for January 1947. Only Talmadge and Joe Brown, in the mid-19th century, have been elected four times as governor of Georgia.

Howard Hollis "Bo" Callaway Sr. was an American politician and businessman from the U.S. state of Georgia. Initially a Democrat and a supporter of racial segregation, in 1964 he was the first Republican elected to Congress in Georgia since Reconstruction in the 1800s. In 1966, he narrowly lost a contested election for governor. He later served as Secretary of the Army, appointed by Richard Nixon. He worked with his family to develop what is now Callaway Gardens in Pine Mountain, Georgia and owned Crested Butte ski resort in Colorado. 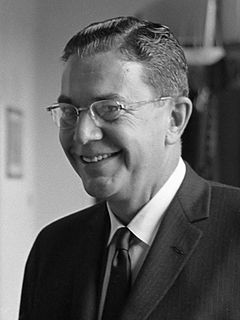 The 1966 Georgia gubernatorial election was held on November 8, 1966. After an election that exposed divisions within the Georgia Democratic Party, segregationist Democrat Lester Maddox was elected Governor of Georgia. The voting also brought future President Jimmy Carter to statewide prominence for the first time. The election was very close; Republican candidate Bo Callaway won a plurality of the popular vote, but lost the contingent election in the Georgia General Assembly to Maddox.

The Cocking affair was an attempt in 1941 by Georgia governor Eugene Talmadge to exert direct control over the state's educational system, particularly through the firing of Professor Walter Cocking because of his support for racial integration, and the subsequent removal of members of the Georgia Board of Regents who disagreed with the decision. It has been made into an opera entitled A Scholar Under Siege.

Benjamin Wynn Fortson Jr. was a Secretary of State of Georgia. After being selected by Ellis Arnall, the governor in 1946, Fortson kept his title as secretary until 1979, making him the longest-running secretary in Georgia history. 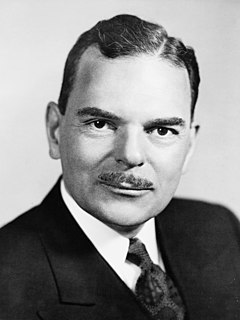 The 1942 Georgia gubernatorial election took place on November 3, 1942, in order to elect the governor of Georgia. The governor was elected to a four-year term for the first time, instead of a two-year term.

Roy Vincent Harris was a politician in the U.S. state of Georgia during the mid-1900s. From the 1920s until the 1940s, Harris served several terms in both the Georgia House of Representatives and the Georgia State Senate, and he served as the speaker of the house from 1937 to 1940 and again from 1943 to 1946. Historian Harold Paulk Henderson has called Harris "one of Georgia's most capable behind-the-scenes politicians".