Threnetica lacrymans is a species of beetle in the family Cerambycidae, and the only species in the genus Threnetica. It was described by Thomson in 1864. [1]

Dry rot is wood decay caused by certain species of fungi that digest parts of the wood which give the wood strength and stiffness. It was previously used to describe any decay of cured wood in ships and buildings by a fungus which resulted in a darkly colored deteriorated and cracked condition.

Serpula lacrymans is one of the fungi that cause damage to timber referred to as dry rot. It is a basidiomycete in the order Boletales. The Serpula lacrymans has the ability to rapidly colonise sites through unique and highly specialised mycelium which also leads to greater degradation rates of wood cellulose. 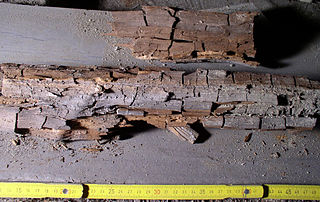 A wood-decay fungus is any species of fungus that digests moist wood, causing it to rot. Some species of wood-decay fungi attack dead wood, such as brown rot, and some, such as Armillaria, are parasitic and colonize living trees. Excessive moisture above the fibre saturation point in wood is required for fungal colonization and proliferation. Fungi that not only grow on wood but permeate its fibrous structure and actually cause decay, are called lignicolous fungi. In nature, this process causes the breakdown of complex molecules and leads to the return of nutrients to the soil. Various lignicolous fungi consume wood in various ways; for example, some attack the carbohydrates in wood and some others decay lignin. The rate of decay of wooden materials in various climates can be estimated by empirical models. 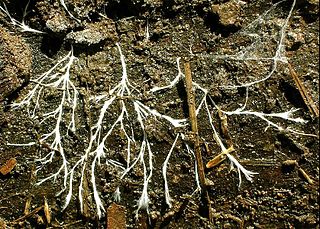 Zygaena fausta is a member of the family Zygaenidae, the day-flying burnet moths. Its bright aposematic colours of red, white and black on the wings indicate to possible predators such as birds that it is foul tasting or poisonous. In flight, the bright red abdomen is revealed, contrasting with the white legs and black head and antennae; the thorax is black and white with an eye spot on each side. There appears to be a considerable variation in pattern among specimens from different parts of Europe.

Mesorhaga is a genus of flies in the family Dolichopodidae.

Robert Hartig was a German forestry scientist and mycologist.

Serpula is a genus of fungi in the family Serpulaceae.

Atromentin is a natural chemical compound found in Agaricomycetes fungi in the orders Agaricales and Thelephorales. It can also be prepared by laboratory synthesis. Chemically, it is a polyphenol and a benzoquinone.

Xenocerus lacrymans is a species of beetles from the family Anthribidae, also known as fungus weevils.

Acanthoderes is a genus of beetles in the family Cerambycidae, containing the following species:

Acanthoderes lacrymans is a species of beetle in the family Cerambycidae. It was described by Thomson in 1864.

Morimopsis is a genus of longhorn beetles of the subfamily Lamiinae, containing the following species:

Morimopsis lacrymans is a species of beetle in the family Cerambycidae. It was described by James Thomson in 1857. It is known from India.

Xerocomic acid is a red-orange pigment found in fungi of the order Boletales. It is the precursor to variegatic acid, and is preceded by atromentic acid and atromentin.. As an example, it is isolated from Serpula lacrymans. It is soluble in methanol. An oxidase acting on xerocomic acid is responsible for the "bluing" reaction seen in mushrooms.

Atromentic acid is a red-organge pigment found in fungi within the Boletales group. It is the precursor to variegatic acid and xerocomic acid, and is preceded by atromentin. As an example, it is isolated from Serpula lacrymans. It is soluble in methanol. Variants include homoatromentic acid. This pigment has been studied and elucidated by Wolfgang Steglich and colleagues over decades. When atromentin is oxidised with hydrogen peroxide a yellow product is produced. A sodium hydroxide solution is also yellow, but when this is neutralized with acid the red atromentic acid crystallises. Concentrated potassium hydroxide breaks up the compound to p-hydroxyphenylacetic acid and oxalic acid.