Threnody is the second album from Swedish melodic death metal/industrial band Engel. [1] This is the final Engel release with Daniel "Mojjo" Moilanen on drums. Threnody was finished by the end of 2008, but due to issues with their former label, SPV GmbH, the release of the album was delayed.

Music videos were released for the demo version of "Elbow And Knives" (entitled "Someone Died (Made You God)"), "Sense the Fire" and "Six Feet Deep".

The Caitiff Choir is the debut full-length album by the band It Dies Today. It was released on September 21, 2004 via Trustkill Records. "A Threnody for Modern Romance" served as the album's lead single, followed by "Severed Ties Yield Severed Heads." Music videos were released for both tracks.

Envenom is the eighth album by Runemagick. It was released as a limited edition of 1,000 hand-numbered digipaks only in 2005 through Aftermath Music. 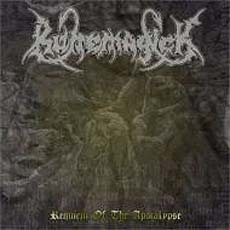 Requiem of the Apocalypse is the fourth album by Runemagick. It was released in 2002 on Aftermath Music 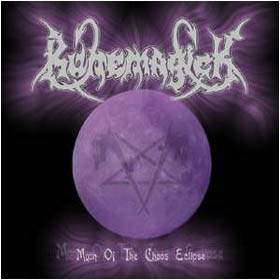 Moon of the Chaos Eclipse is the fifth album by Runemagick. It was released as a limited edition digipak of 1000 copies in 2002 through Aftermath Music.

Darkness Death Doom is the sixth album by Runemagick. It was released in 2003 on Aftermath Music.

On Funeral Wings is the seventh album by Runemagick. It was released in 2004 through Aftermath Music.

Verisäkeet is the fourth full-length album by Finnish metal band Moonsorrow. It was released on February 23, 2005 through Spinefarm Records. The album comes in a full-black shining case with golden Moonsorrow logo, with the original booklet inside. The United States release of the album, through Season of Mist, however, is packaged in a clear jewel case displaying the album's artwork.

Invocation of Magick is the ninth album by Runemagick. It was released in 2006 on Aftermath Music

Black Magick Sorceress is an EP by the Swedish death doom metal band Runemagick. It was released in 2005 on Aftermath Music on vinyl only.

Lord Belial is a Swedish black metal band. The band formed in 1992 and released their debut album in 1995; placing them among the pioneers of Swedish black metal. Their sound has been compared with bands such as Dissection. In January 2009, they stopped all their activities, the main reason being the growing hearing problem of their drummer, Micke Backelin.

Engel is a metal band from Gothenburg, Sweden. They are currently signed to Gain Records/Sony.

Absolute Design is the debut album from Swedish melodic death metal/industrial band Engel. The album was released in Europe on October 31, 2007, while the North American release date was May 20, 2008. Music videos were released for "Casket Closing", "Next Closed Door" and "Calling Out".

Dawn of the End is the tenth album by Runemagick. It was released in 2007 on Aftermath Music. 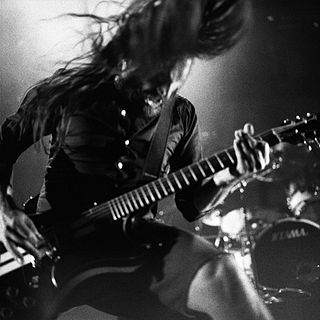 Niclas Engelin is a Swedish heavy metal guitarist for In Flames, Drömriket, Passenger & Engel. Engelin was the lead guitarist for Gardenian, and has been in and out of In Flames on five different occasions.

Woe of Tyrants is an American death metal band from Chillicothe, Ohio, which formed in 2004.

Threnody is the third album by American death metal band Woe of Tyrants, released on April 13, 2010 through Metal Blade Records. It was produced by Jamie King.

Netherbird is a Swedish melodic black metal band from Stockholm. Their signature sound is heavily influenced by the early 90’s Scandinavian black and death metal, as well as elements of doom, gothic and heavy metal present.