Throbis an American sitcom that aired in syndication from September 6, 1986 to May 21, 1988. The series, created by Fredi Towbin, was produced by Procter & Gamble Productions in association with Taft Entertainment Television, and was distributed by Worldvision Enterprises. The series' rights are currently held by CBS Television Distribution.

The series revolved around thirty-something divorcee Sandy Beatty (Diana Canova), who gets a job at a small new wave record label, Throb. Beatty's boss is Zachary Armstrong (Jonathan Prince), who had a huge crush on Sandy. Beatty also has a 12-year-old son named Jeremy (played in the first season by Paul Walker and in season two by Sean de Veritch). Beatty's best friend was Meredith (Maryedith Burrell), a single teacher who lived in her building, and her co-workers included hip business manager Phil Gaines (Richard Cummings, Jr.), and British-born Prudence Anne Bartlett, who was nicknamed "Blue" (Jane Leeves).

During the second season, Sandy moved from her original apartment to the recently vacated penthouse in her building. She took in her co-worker Blue to help out with rent, but the differences between straitlaced, somewhat conservative Sandy and the free-spirited Blue became more pronounced as they both lived and worked together. However, they were still friends.

This show was the first time many American TV viewers saw Jane Leeves, who later gained fame as Daphne Moon on Frasier . Paul Walker played Jeremy Beatty for the first season, and would become a leading man in Hollywood some 15 years later, particularly after his breakthrough role in The Fast and the Furious .

The creation of the Zachary Armstrong character, and the casting of Jonathan Prince in the role, was inspired by the (then) current rising fame of Michael J. Fox. Prince bore a strong physical resemblance to Fox, and played Zachary with many similar characterizations as Fox's Family Ties character, Alex P. Keaton. Like Alex Keaton, Zachary was also a young, diminutive overachiever on the fast track who found himself attracted to women who were both older and taller than he, the main object of his affection being Sandy.

Reds is a 1981 American epic historical drama film, co-written, produced, and directed by Warren Beatty, about the life and career of John Reed, the journalist and writer who chronicled the October Revolution in Russia in his 1919 book Ten Days That Shook the World. Beatty stars in the lead role alongside Diane Keaton as Louise Bryant and Jack Nicholson as Eugene O'Neill.

Melrose Place is an American prime time television soap opera that aired on Fox from July 8, 1992, to May 24, 1999, for seven seasons. The show follows the lives of a group of young adults living in an apartment complex called Melrose Place, in West Hollywood, California. The show was created by Darren Star for Fox and executive produced by Aaron Spelling for his company, Spelling Television. It was the second series in the Beverly Hills, 90210 franchise. Season one and season two were broadcast on Wednesday at 9 p.m., after Beverly Hills, 90210. In 1994, for its third-season premiere, the show moved to Monday at 8 p.m.

Diane Hall Keaton is an American actress and director. Known for her idiosyncratic personality and fashion style, she has received various accolades throughout her career spanning over six decades, including an Academy Award, a British Academy Film Award, two Golden Globe Awards, and the AFI Life Achievement Award.

The Somerset Maugham Award is a British literary prize given each year by the Society of Authors. Set up by William Somerset Maugham in 1947 the awards enable young writers to enrich their work by gaining experience in foreign countries. The awards go to writers under the age of 30 with works published in the year before the award; the work can be either non-fiction, fiction or poetry. Since 1964 multiple winners have usually been chosen in the same year. In 1975 and in 2012 the award was not given.

Australian Princess is an Australian reality television show that first premiered on Network Ten on 5 October 2005. It is produced by Granada Australia, who are responsible for other programs such as Dancing with the Stars, Australia's Next Top Model, and Merrick and Rosso Unplanned. It is an Australian version of American Princess.

The Eric Gregory Award is a literary award given annually by the Society of Authors for a collection by British poets under the age of 30. The award was founded in 1960 by Dr. Eric Gregory to support and encourage young poets. In 2021, the seven winners were: Michael Askew; Dominic Hand; Cynthia Miller; Gboyega Odubanjo; Kandance Siobhan Walker; Phoebe Walker; and Milena Williamson. 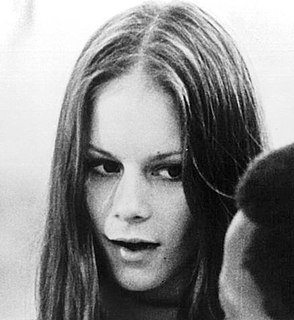 Shelley Plimpton is an American former actress and Broadway performer. She is perhaps best known for originating the role of Crissy in the off-Broadway production of Hair, a role she resumed when the production moved to Broadway in 1968. She is the mother of actress Martha Plimpton.

Miranda Lee is a popular Australian writer of over 75 romance novels. She published her novels in Mills & Boon's since 1990. 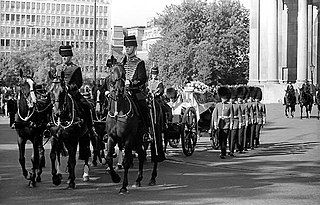 The funeral of Diana, Princess of Wales started on Saturday 6 September 1997 at 9:08 am in London, when the tenor bell of Westminster Abbey started tolling to signal the departure of the cortège from Kensington Palace. The coffin was carried from the palace on a gun carriage by riders of the King's Troop and escorted by mounted police, along Hyde Park to St James's Palace, where Diana's body had remained for five days before being taken to Kensington Palace. The Union Flag on top of the palace was lowered to half mast. The official ceremony was held at Westminster Abbey in London and finished at the resting place in Althorp.

The 1993 British League season was the 59th season of the top tier of speedway in the United Kingdom and the 29th known as the British League. 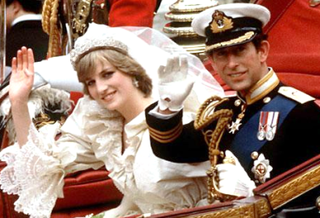 The wedding of Prince Charles and Lady Diana Spencer took place on Wednesday, 29 July 1981, at St Paul's Cathedral in London, United Kingdom. The groom was the heir apparent to the British and Commonwealth thrones, and the bride was a member of the Spencer family.

Hitman: Agent 47 is a 2015 action thriller film directed by Aleksander Bach and written by Skip Woods and Michael Finch. It is based on the Hitman video game series, developed by IO Interactive, and its main character, a mysterious assassin known only as Agent 47.

The Crown is a historical drama television series about the reign of Queen Elizabeth II, created and principally written by Peter Morgan and produced by Left Bank Pictures and Sony Pictures Television for Netflix. Morgan developed it from his drama film The Queen (2006) and especially his stage play The Audience (2013). The first season covers the period from Elizabeth's marriage to Philip, Duke of Edinburgh, in 1947 to the disintegration of her sister Princess Margaret's engagement to Group Captain Peter Townsend in 1955. The second season covers the period from the Suez Crisis in 1956 to the retirement of Prime Minister Harold Macmillan in 1963 and the birth of Prince Edward in 1964. The third season spans 1964 to 1977, includes Harold Wilson's two periods as prime minister, and introduces Camilla Shand. The fourth season spans 1979 to the early 1990s and includes Margaret Thatcher's tenure as prime minister and Prince Charles's marriage to Lady Diana Spencer. The fifth and sixth seasons, which will close the series, will cover the Queen's reign into the 21st century. 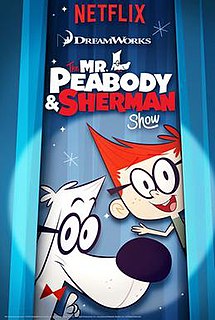 Stretch Armstrong and the Flex Fighters is an American animated series produced by Hasbro Studios and distributed by Netflix. It is based on the 1970s action figure Stretch Armstrong. The Netflix series features a brand new superhero universe, new characters, new villains, and new lore. The series was developed by executive producers Kevin Burke, Victor Cook, and Chris "Doc" Wyatt.