Thronecast is a British television series which aired on Sky Atlantic between 2011 and 2019. From the fifth series onwards, the show was presented by Sue Perkins and Jamie East. It is an aftershow to Game of Thrones , which also aired on the channel. Each episode varied between 10 minutes and 60 minutes in length and featured interviews with members of the cast and crew, interaction with the audience and social media alongside analysis of the previous episode and a preview of the next episode of Game of Thrones. It was the only official aftershow for the American series until HBO aired After the Thrones in 2016 – a show which was cancelled after only one series. [1]

Thronecast was originally devised by executive producers Ruby Thomas, Ben Boyer and Koink Productions Ltd for Sky Digital Entertainment. The series began airing online in April 2011 as a series of 10-minute podcasts presented by Geoff Lloyd to correspond with the first series of Game of Thrones. Annabel Port joined Geoff for the second series, which corresponded with the broadcast of the second series of Game of Thrones. For the third series, Thronecast became a 15-minute on-air show that was broadcast on Sky Atlantic following each episode of the third series of Game of Thrones, and featured new guest presenter Grace Dent. The fourth series was presented by Jamie East and Rachel Parris, and was 30 minutes long. The fifth series was presented by Sue Perkins and Jamie East and was 30 minutes long, except for the series finale which was an extended hour long special. [2] [3] Perkins and East continued to present the seventh and eighth series of the show which were all 60 minutes long with the exception of the final episode of the show, which was 70 minutes. Series 7 and 8 included pre-series episodes titled War Room, and the eighth series also included a 90 minutes long gameshow titled Gameshow of Thrones and a 30-minute pre-finale episode titled Thronecast: The End is Coming.

The series finale was an extended one-hour episode and was viewed by 560,000 viewers, making it the second highest-rated broadcast that week, behind the actual episode. It also received 29,000 timeshifted viewers. [26]

The series finale was an extended one-hour episode and was viewed by 587,000 viewers, making it the second highest-rated broadcast that week, behind the actual episode. It also received 45,000 timeshifted viewers. [36]

A pre-series multi-parter episode titled "War Room", filmed on location, [46] was broadcast the week before the start of Series 7.

Two specials aired before Series 8: "Gameshow of Thrones" featuring a number of stars of the show with superfans, plus "War Room" featuring superfans Al Murray, Lauren Laverne and Jonathan Ross.

The series finale includes a special 30-minute pre-show episode titled "The End is Coming", and a 70-minute post-show episode. These episodes incorporated an additional studio segment titled "Littlefinger's Establishment", where Jamie East talked to stars of the show and superfans about their memories of working on the show.

Episode 3 of Series 8 was the most viewed episode of Thronecast according to BARB figures.

Sky Atlantic is a British pay television channel owned by Sky Group Limited broadcast in the United Kingdom and Ireland. The channel is primarily dedicated to imported programmes from the United States, and holds the domestic rights to HBO and Showtime dramas, but also broadcast many original Sky productions. It is exclusively available on the Sky satellite TV platform and Sky's Now TV platform. 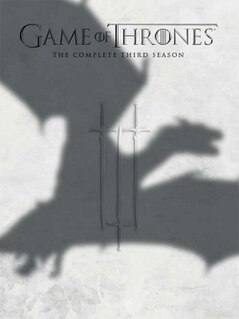 The third season of the fantasy drama television series Game of Thrones premiered in the United States on HBO on March 31, 2013, and concluded on June 9, 2013. It was broadcast on Sunday at 9:00 pm in the United States, consisting of 10 episodes, each running approximately 50–60 minutes. The season is based roughly on the first half of A Storm of Swords. The series is adapted for television by David Benioff and D. B. Weiss. HBO renewed the series for a third season on April 10, 2012, nine days after the second season's premiere. Production began in July 2012. The show was filmed primarily in Ireland, Northern Ireland, Croatia, Iceland and Morocco.

"And Now His Watch Is Ended" is the fourth episode of the third season of HBO's fantasy television series Game of Thrones, and the 24th episode of the series. It was written by showrunners and executive producers David Benioff and D. B. Weiss and directed by Alex Graves, his directorial debut for the series.

"The Climb" is the sixth episode of the third season of HBO's fantasy television series Game of Thrones, and the 26th episode of the series. Directed by Alik Sakharov and written by David Benioff and D. B. Weiss, it aired on May 5, 2013.

"Two Swords" is the fourth season premiere episode of HBO's fantasy television series Game of Thrones, and the 31st overall. The episode was written by series co-creators and showrunners David Benioff and D. B. Weiss, and directed by Weiss. It premiered on April 6, 2014. 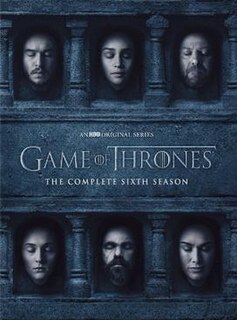 The sixth season of the fantasy drama television series Game of Thrones premiered on HBO on April 24, 2016, and concluded on June 26. It consists of 10 episodes, each of approximately 50–60 minutes long. Much of the season's storyline is derived from content not yet published in George R. R. Martin's A Song of Ice and Fire series, although a significant amount of material from A Feast for Crows, A Dance with Dragons and the upcoming sixth novel The Winds of Winter, which Martin outlined to showrunners David Benioff and D.B. Weiss, was used. The series was adapted for television by Benioff and weiss. HBO had ordered the season on April 8, 2014, together with the fifth season, which began filming in July 2015 primarily in Northern Ireland, Spain, Croatia, Iceland and Canada. The season cost over $100 million to produce.

"Hardhome" is the eighth episode of the fifth season of HBO's fantasy television series Game of Thrones, and the 48th overall. It was written by the series' creators David Benioff and D. B. Weiss, and directed by Miguel Sapochnik. It premiered on May 31, 2015.

The seventh and penultimate season of the fantasy drama television series Game of Thrones premiered on HBO on July 16, 2017, and concluded on August 27, 2017. Unlike previous seasons, which consisted of ten episodes each, the seventh season consisted of only seven episodes. Like the previous season, it largely consisted of original content not found in George R. R. Martin's A Song of Ice and Fire series, while also incorporating material that Martin revealed to showrunners about the upcoming novels in the series. The series was adapted for television by David Benioff and D. B. Weiss.

After the Thrones is an American live television aftershow that premiered on April 25, 2016, and ended on June 28, 2016. It was hosted by Andy Greenwald and Chris Ryan who discussed episodes of the HBO television series Game of Thrones. The talk show was executive produced by Bill Simmons and Eric Weinberger. Greenwald and Ryan previously hosted a podcast version of the show titled Watch the Thrones on Simmons' Grantland website. A similar talk show called Thronecast aired on British channel Sky Atlantic, which also discussed episodes of Game of Thrones. 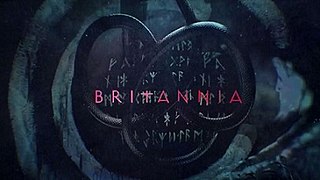 Britannia is a historical mystical drama television show. It was created by Jez Butterworth and Tom Butterworth. The show was the first co-production between Sky and Amazon Prime Video and stars Kelly Reilly, David Morrissey, Zoë Wanamaker, Mackenzie Crook, Nikolaj Lie Kaas, and Eleanor Worthington Cox. It first aired on Sky Atlantic in the UK beginning 18 January 2018 and on Amazon Prime Video in the US beginning 26 January 2018. The first series aired on Epix beginning 2 August 2020. The theme song is Donovan's eerie "Hurdy Gurdy Man".

"Dragonstone" is the seventh season premiere episode of HBO's fantasy television series Game of Thrones, and the 61st overall. It was written by series co-creators David Benioff and D. B. Weiss, and directed by Jeremy Podeswa.

"The Queen's Justice" is the third episode of the seventh season of HBO's fantasy television series Game of Thrones, and the 63rd overall. The episode was written by series co-creators David Benioff and D. B. Weiss, and directed by Mark Mylod.