The project was originally started by Gianluca Troiano in cooperation with the Kick Off Association as a remake to the classic Amiga football game Kick Off 2. [1] Several beta versions were released during the first decade of the 21st century and Dino Dini, the programmer behind the Kick Off series praised the result. [3]

In December 2011 The developer announced that they were working on a new game under the working title Throw In 2nd Half. In October 2012 The Fox Software announced that the name of the game would be Active Soccer and that it was released at first for iOS, Android, Windows and Mac OS. [4]

Throw In started as a 3D remake of Kick Off 2. The programmer and three times Kick Off 2 World Champion Gianluca Troiano started the project in cooperation with the Kick Off Association in 2004. [5] Several betaversions were released in 2004 and 2005. A transformed version of the game was released in 2006 as Nutella Football Game by the game company Artematica. [6] It was sold in big Italian malls as a promotional gift together with a can of Nutella during the FIFA World Cup 2006. Another transformed version was released as Up Soccer by Artematica. [7]

The Throw In project went on and in 2007 beta 0.8 was released with upgraded graphics and improved gameplay. a few months later in early 2008 beta 0.85 was released. The Throw In beta versions became widely spread and available for download on many game sites. [1] In total the beta versions were downloaded 100,000 times and the trailers for the 0.8 and 0.85 versions had 80,000 views. [8] The programmer behind Kick Off Dino Dini, praised the game. [3]

The Throw In beta versions were just as Kick Off, was primarily developed for joysticks with one button. The gameplay in the betas are close to Kick Off 2 and also have similarities with Sensible Soccer . After beta 0.86 the Throw In project became quiet. There were rumors about a 1.0 version and a Throw In Player Manager but these were never released. [4]

In December 2011 The developer announced that they were working on a new game under the working title Throw In 2nd Half. In 2012 The Fox Software announced that the official name of the game will be Active Soccer and that it will be released for iOS, Android, Windows and Mac. Chris Huelsbeck will write the soundtrack for Active Soccer. [4] The game Active Soccer was first shown at the video conference 2012 at the videogame museum Vigamus in Rome 20 and 21 October. At the conference the Active Soccer booth was visited by Dino Dini the programmer of the classic video game Kick Off. [9] 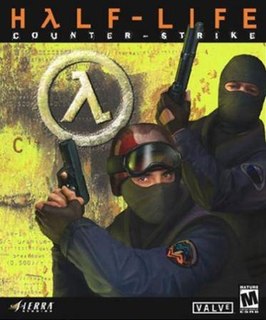 Counter-Strike is a first-person shooter video game developed by Valve. It was initially developed and released as a Half-Life modification by Minh "Gooseman" Le and Jess Cliffe in 1999, before Le and Cliffe were hired and the game's intellectual property acquired. Counter-Strike was released by Valve for Microsoft Windows in 2000. The game is the first installment in the Counter-Strike series. Several remakes and ports have been released on Xbox, as well as OS X and Linux.

Dino Dini is a British video game developer and creator of the Kick Off series of football games. He was a lecturer at the NHTV Breda University of Applied Sciences in the Netherlands, teaching game programming.

Day of Defeat is a team-based multiplayer first-person shooter video game set in the European theatre of World War II on the Western front. Originally a modification of the 1998 game Half-Life, the rights of the modification were purchased by Valve and released as a full retail title in 2003.

Chris Sawyer is a Scottish video game designer and programmer who is best known for creating the Transport Tycoon and RollerCoaster Tycoon series. He is also the founder of 31X, a mobile game development company.

Free Pascal Compiler (FPC) is a compiler for the closely related programming-language dialects Pascal and Object Pascal. It is free software released under the GNU General Public License, with exception clauses that allow static linking against its runtime libraries and packages for any purpose in combination with any other software license.

FIFA is a series of association football simulation video games developed and released annually by Electronic Arts under the EA Sports label. Football video games such as Sensible Soccer, Kick Off and Match Day had been developed since the late 1980s and already competitive in the games market when EA Sports announced a football game as the next addition to their EA Sports label. The Guardian called the series "the slickest, most polished and by far the most popular football game around". As of 2011, the FIFA franchise has been localised into 18 languages and available in 51 countries. Listed in Guinness World Records as the best-selling sports video game franchise in the world, by 2019, the FIFA series had sold over 282.4 million copies. It is also one of the best-selling video game franchises.

The Kick Off franchise is a series of football simulation computer games, In 1988 Dino Dini was hired to code a top down football game from a Steve Screech idea. in 1989 Kick Off was then published by Anil Gupta's publishing house Anco Software for the Atari ST and Commodore Amiga. The original version was programmed by Dino Dini with graphics, playtesting and tuning by Steve Screech. First released in 1989, Kick Off was well-received and won awards.

Yetisports is a series of games created in 2004 by Austrian studio Edelweiss Medienwerkst and later by ROOT9 Medialab.

Player Manager was a football management game, released in 1990. It was notable for being the first game to combine both managing the team and playing as a single player. The match engine borrowed heavily from the Kick Off match engine, which was developed by Dino Dini and Anco Software, who also created Player Manager. This was the first in a series of games called Player Manager. 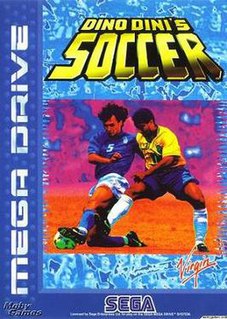 Dino Dini's Goal is a soccer video game released by Virgin Games in 1993. It is considered by many to be the "true" sequel to Kick Off 2, as Kick Off's creator Dino Dini had moved from Anco Software and was responsible for all Goal's engineering and game design. Goal introduced improved dynamics and A.I. over Kick Off 2, as well as other innovative features, such as multiple camera views. The game shipped 60,000 units on the first day of release.

Scrivener is a word-processing program and outliner designed for authors. Scrivener provides a management system for documents, notes and metadata. This allows the user to organize notes, concepts, research, and whole documents for easy access and reference. Scrivener offers templates for screenplays, fiction, and non-fiction manuscripts. After writing a text, the user may export it for final formatting to a standard word processor, screenwriting software, desktop publishing software, or TeX.

MicroProse Soccer is a soccer video game published by MicroProse in 1988. The original Commodore 64 version was developed by Sensible Software and ported to other systems. It is the fore-runner of the 16-bit Sensible Soccer. In the United States the game was released as Keith Van Eron's Pro Soccer.

Warp3D was a project, founded by Haage & Partner in 1998, that aimed to provide a standard API which would enable programmers to access, and therefore use, 3D hardware on the Amiga.

Source 2 is a video game engine developed by Valve as the successor to the original Source engine. The engine was announced in 2015, with the first game to use it, Dota 2, being ported from the original engine that same year. Since then, Valve's Artifact, Dota Underlords, and Half-Life: Alyx have all been made with the engine.

Magic: The Gathering Arena is a free-to-play digital collectible card game developed and published by Wizards of the Coast. The game is a digital adaption of the Magic: The Gathering (MTG) card game, allowing players to gain cards through booster packs, in-game achievements or microtransaction purchases, and build their own decks to challenge other players. It is commonly referred to as MTG Arena, Magic Arena or just Arena within the broader Magic: The Gathering context. The game was released in a beta state in November 2017, and was fully released for Microsoft Windows users in September 2019, and a macOS version on June 25, 2020. Cross-save compatible versions for mobile devices are planned in 2021.