Thudiyalur is a neighborhood in the city of Coimbatore, in the Indian state of Tamil Nadu. It is about 10 kilometres (6.2 mi) north of Town Hall. Thudiyalur is one of the fast-growing neighbourhoods of Coimbatore, due to the presence of many industries and IT companies in Saravanampatti. Earlier, this place was known as Thiruthudisaiampathy, later it was named Thudiyalur.

It houses the Regional Transport Office of Coimbatore North (TN-38).

Thiruthudisaiampathy Virundeeswarar Temple in Vadamadurai near Thudiyalur is construction dating back to 1300+ years old ancient temple. Lord Shiva is a Swayambumurthi in the temple.

Coimbatore Metro feasibility study is completed and one of the route planned from Bilichi near Press Colony through Mettupalayam road till Ukkadam Bus Terminus covering 24 km.

Coimbatore district is one of the 38 districts in the state of Tamil Nadu in India. Coimbatore is the administrative headquarters of the district. It is one of the most industrialized districts and a major textile, industrial, commercial, educational, information technology, healthcare and manufacturing hub of Tamil Nadu. The region is bounded by Tiruppur district in the east, Nilgiris district in the north, Erode district in the north-east, Palakkad district, Idukki district and small parts of Thrissur district and Ernakulam district of neighboring state of Kerala in the west and south respectively. As of 2011, Coimbatore district had a population of 3,458,045 with a sex-ratio of 1,000 and literacy rate of 84%.

Ashokapuram is a part of Coimbatore city in the state of Tamil Nadu, India. It is about 12 km from City center in North Direction. Ashokapuram is located on the streach of Mettupalayam road in Coimbatore. Neighbouring places are Thudiyalur, NGGO Colony.ThanasiPallam Odai Of River Kousika Touches the Asokpuram in Northside.

Karamadai is located near Mettupalayam, a suburb of Coimbatore in the Indian state of Tamil Nadu. It is a northern suburb of Coimbatore city, located on Coimbatore-Ooty NH 67. Nearby places are Teachers colony, Press Colony, Jodhipuram and Periyanaickenpalayam. The Ranganathaswamy temple and Nanjundeswarar temple are the most prominent landmarks in the town. The town of karamadai came into limelight due to the presence of ex-steel giant Sri Ramakrishna Steel Industries. Previously agricultural town became industrial due to the presence of Sri Ramakrishna Steel Industry.

Karumathampatti is a Municipality in the Coimbatore district in the state of Tamil Nadu, India. It is one of the most developing suburb in Coimbatore about 25 km away from the city centre. It is situated in between NH544 which connects the city of Coimbatore with Salem – Erode – Tirupur and also in between the State Highway 165 connects Annur – Kamanaikenpalayam. Nearby places are Somanur-3 km, Avinashi-10 km, Tirupur-20 km, Sulur-15 km, Annur-16 km. Coimbatore -27,Mettupalayam-38,Palladam-19. Karumathampatti lies near the junction of two major roads, NH544(Coimbatore – Salem) and Karumathampatti – Annur road.

TNPL Kagithapuram is a Locality of Punjai Pugalur Municipality in Karur district in the Indian state of Tamil Nadu. 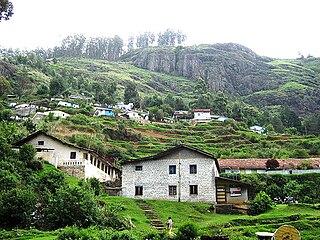 Ketti also called Ketti Valley is a small town nestled in a large valley of the same name. It is located in The Nilgiris District of Tamil Nadu State, South India and is a Revenue Village of Coonoor Taluk. Upper Ketti is another village called Yellanahalli, which is located on the main Coonoor to Ooty road.

Kottur-Malayandipattinam or Kottur is the biggest panchayat town in Pollachi Taluk of Coimbatore rural district in the Indian state of Tamil Nadu. Its short name is KM Pattinam. The name Kottur-Malayandipattinam is used to distinguish it from other places of the same name in south India, with Malayandipattinam (malai-yandi-pattanam) being the name of the southern part of the town and named after being surrounded by western ghats. It is famous for buying elephant ivory 100 years before, kottur Tamil meaning of kottu is elephant ivory and it also means the end of town. Mangamma Mill bus stop is one of the famous bus stops.

Maniyakaranpalayam is a residential neighbourhood in the city of Coimbatore in Tamil Nadu, India.

Pugalur is an area in Tamil Nadu in southern India divided into two parts, Nanjai and Punjai. Nanjai refers to land with plenty of water usually with water bodies like rivers, canals, ponds etc. and Punjai refers to land with fewer water bodies and with facilities such as bore wells. Pugalur in the nanjai area is known as Nanjai Pugalur and Pugalur in the punjai area is known as Punjai Pugalur.

Udayampalayam is part of Coimbatore North in the Indian state of Tamil Nadu. It is located 7 km from Coimbatore Railway Station and 18 km from the airport. This is the northern border of the Coimbatore corporation.

Mettupalayam Road, (NH 181) is a major arterial road in city of Coimbatore, Tamil Nadu, India. This NH runs for about 10 kilometers starting exactly from Rangai Gownder street up to the northern Thudiyalur within the corporation limits.Beyond that the road continues northwards for a distance of 26 kilometres till Mettupalayam. It is six metres (20 ft) wide in most stretches. The road narrows at the stretches between Edayar street, RG street and Flower Market areas. Green Corridor system is under implementation between Chintamani and Thudiyalur to synchronise traffic signals, as it is one of the most congested stretches in the city.This road connects the city with Saibaba Colony Bus Terminus and the northern suburbs in the Coimbatore Metropolitan Area.

Kurumbapalayam SSKulam is a part of Coimbatore city in the state of Tamil Nadu, India. It is located on NH 209 between Saravanampatti and Annur.

Thiruthudisaimpathy "Virundeeswarar Temple" [விருந்தீஸ்வரர்] is located in Vadamadurai near Thudiyalur on Mettupalayam road around 10Km from Coimbatore in the State of Tamil Nadu. Earlier this place was called as Thiruthudisaimpathy, later it become as Thudiyalur. It is one of the ancient temples in the city which is more than 1300+ years old and it is one among most important Siva Temples in Coimbatore. It is believed to have been constructed by Chozha kings in the 7th century.