Thule ( UK: /ˈθjuːli/ THEW-lee, US: /ˈθuːli/ THOO-lee, /ˈtuːli/ TOO-lee) was, in ancient Greek and Roman literature and cartography, a semi-mythical place located in the far north, usually an island. Thule may also refer to:

Qaanaaq, formerly and still popularly known as Thule or New Thule, is the main town in the northern part of the Avannaata municipality in northwestern Greenland. It is one of the northernmost towns in the world. The inhabitants of Qaanaaq speak Kalaallisut and Danish, and many also speak the Inuktun language. The town has a population of 656 as of 2013. 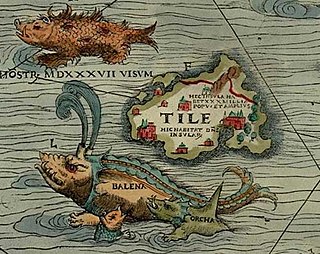 Thule is the farthest north location mentioned in ancient Greek and Roman literature and cartography. Modern interpretations have included Orkney, Shetland, the island of Saaremaa (Ösel) in Estonia, and the Norwegian island of Smøla. 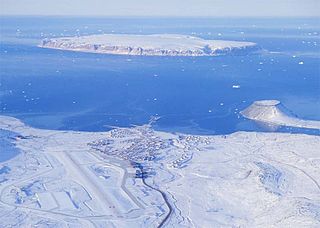 Thule Air Base, or Thule Air Base/Pituffik Airport, is the United States Air Force's northernmost base, located 1,207 km (750 mi) north of the Arctic Circle and 1,524 km (947 mi) from the North Pole on the northwest coast of the island of Greenland. 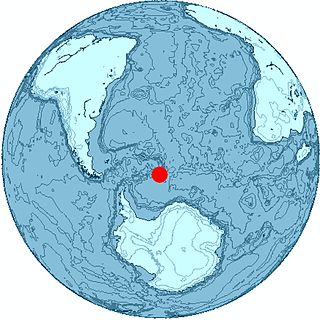 Southern Thule is a collection of the three southernmost islands in the South Sandwich Islands: Bellingshausen, Cook, and Thule (Morrell). The Southern Thule territory has been administered by the United Kingdom since 1908 and also claimed by Argentina since 1938. The island group is barren, windswept, bitterly cold, and uninhabited. It has an extensive exclusive economic zone rich in marine living resources managed as part of the SGSSI fisheries. The Admiralty's Antarctic Pilot says that Southern Thule is part of an old sunken volcano, and is covered with ash and penguin guano. There are seals, petrels, and a bank of kelp just offshore, especially around a small inlet on Morrell called Ferguson Bay. 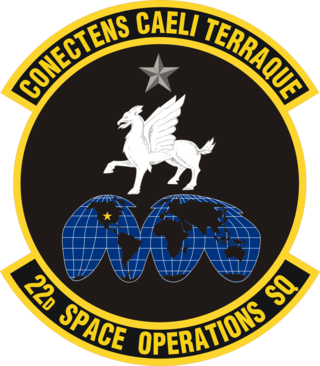 Ultima may refer to:

Pituffik is a former settlement in northern Greenland, located at the eastern end of Bylot Sound by a tombolo known as Uummannaq, near the current site of the American Thule Air Base. The former inhabitants were relocated to the present-day town of Qaanaaq. The relocation and the fallout from the 1968 Thule Air Base B-52 crash in the vicinity are a contentious issue in Greenland's relations with Denmark and the United States. 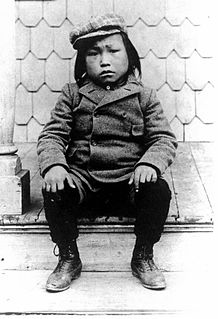 The Inughuit, or the Smith Sound Inuit, historically Arctic Highlanders, are Greenlandic Inuit. Formerly known as "Polar Eskimos", they are the northernmost group of Inuit, and the world's northernmost people, living in Greenland. Inughuit make up about 1% of the population of Greenland. 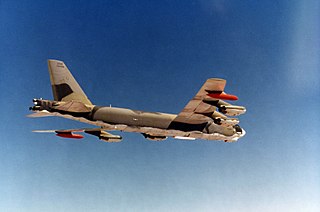 On 21 January 1968, an aircraft accident ; Danish: Thuleulykken) involving a United States Air Force (USAF) B-52 bomber occurred near Thule Air Base in the Danish territory of Greenland. The aircraft was carrying four B28FI thermonuclear bombs on a Cold War "Chrome Dome" alert mission over Baffin Bay when a cabin fire forced the crew to abandon the aircraft before they could carry out an emergency landing at Thule Air Base. Six crew members ejected safely, but one who did not have an ejection seat was killed while trying to bail out. The bomber crashed onto sea ice in North Star Bay, Greenland, causing the conventional explosives aboard to detonate and the nuclear payload to rupture and disperse, which resulted in radioactive contamination. 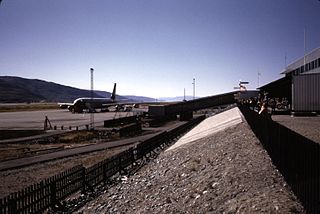 Sondrestrom Air Base, originally Bluie West-8, was a U.S. air base in central Greenland. The site is located 60 mi (97 km) north of the Arctic Circle and 90 mi (140 km) from the northeast end of Kangerlussuaq Fjord, formerly known by its Danish name Søndre Strømfjord. The base is approximately 11 mi (18 km) west-northwest of Ravneklippen and 80 mi (130 km) east of Sisimiut. 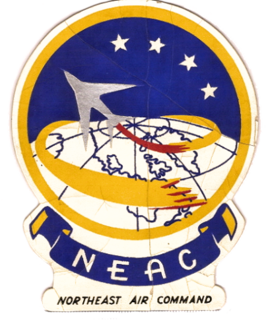 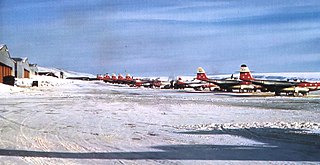 The 4734th Air Defense Group is a discontinued United States Air Force organization. Its last assignment was with the 64th Air Division (AD) at Thule Air Base, Greenland, where it was discontinued in 1958. The group was formed in 1957 when ADC assumed responsibility for air defense of Greenland from Northeast Air Command. It controlled a fighter-interceptor squadron at Thule and a squadron operating a radar at nearby Pingarsuak Mountain. It was discontinued in 1958 and its mission transferred to the 64th AD in Newfoundland.

The 4683d Air Defense Wing is a discontinued United States Air Force (USAF) organization. Its last assignment was with Aerospace Defense Command (ADC)'s Goose Air Defense Sector at Thule Air Base, Greenland, where it was discontinued in 1965.

The 4083d Strategic Wing is a discontinued United States Air Force unit, that was stationed at Thule Air Base, Greenland, where it was discontinued on 1 July 1959. 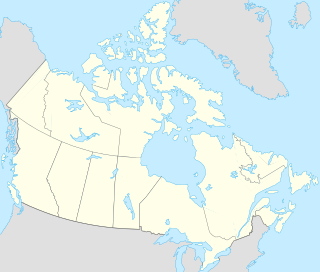 Thule Air Station is a closed United States Air Force General Surveillance Radar station. It is located 9.2 miles (14.8 km) south of Thule Air Base, Greenland. It was closed in 1965.

Thule Site J (J-Site) is a United States Air Force (USAF) radar station in Greenland near Thule Air Base for missile warning and spacecraft tracking. The northernmost station of the Solid State Phased Array Radar System, the military installation was built as the 1st site of the RCA 474L Ballistic Missile Early Warning System and had 5 of 12 BMEWS radars. The station has the following structures:

Pingarssuit Mountain is a Greenland landform near Thule Air Base and which has a USAF military installation.

Ingolf is a masculine given name. It may also refer to: