Thumb Lake, also known as Lake Louise by the "Lake Louise Camp" community, is a kettle lake located in Hudson Township, Charlevoix County, Michigan. The epithet Thumb Lake derives from the lake's bathymetry. An islet protrudes from the lake's west basin. The total surface area of the lake is 484 acres (2.0 km2), with maximum depths of 152 feet (46 m).

The misnomer "Lake Louise" comes from a former Camp director who wanted to rename the lake after his wife.

The lake is nestled in the highlands east of the village of Boyne Falls, centered at 45°11′N84°45′W﻿ / ﻿45.183°N 84.750°W﻿ / 45.183; -84.750 , and is surrounded by wooded hills. Because of its depth and the dearth of run-off into the lake, its waters are exceptionally clear. The lake is inhabited by splake, a stocked hybrid species (lake trout and brook trout), rainbow trout, yellow perch, smallmouth bass, northern pike, largemouth bass, smelt. Public access is available on the eastern shore of the lake in the form of a park with swimming beach, and on the southwestern shore in the form of a boat launch.

The Au Sable River in Michigan, United States runs approximately 138 miles (222 km) through the northern Lower Peninsula, through the towns of Grayling and Mio, and enters Lake Huron at Au Sable. It is considered one of the best brown trout fisheries east of the Rockies and has been designated a blue ribbon trout stream by the Michigan Department of Natural Resources. In French, au sable literally means "at the sand." A 1795 map calls it the Beauais River.

Boyne Falls is a village in Charlevoix County in the U.S. state of Michigan. The population was 294 at the 2010 census. The Boyne Falls post office first opened September 5, 1874. 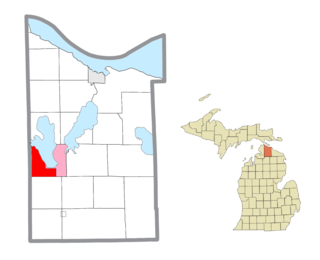 Tuscarora Township is a civil township of Cheboygan County in the U.S. state of Michigan. The population was 3,038 at the 2010 census.

Moran Township is a civil township of Mackinac County in the U.S. state of Michigan. The population was 1,080 at the 2000 census. 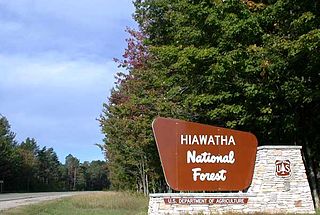 Hiawatha National Forest is a 894,836-acre (362,127 ha) National Forest in the Upper Peninsula of the state of Michigan in the United States. Commercial logging is conducted in some areas. The United States Forest Service administers this National Forest; it is physically divided into two subunits, commonly called the Eastside 46°14′N84°50′W and Westside 46°08′N86°40′W. In descending order of land area it lies in parts of Chippewa, Delta, Mackinac, Alger, Schoolcraft, and Marquette counties. Chippewa and Mackinac counties are in the East Unit, whereas the rest are in the West Unit. The smaller East Unit contains about 44% of the forest's area, whereas the larger West Unit has about 56%. Forest headquarters are located in Gladstone, Michigan. East Unit ranger district offices are located in Sault Ste. Marie and St. Ignace, while West Unit offices are in Manistique, Munising, and Rapid River. 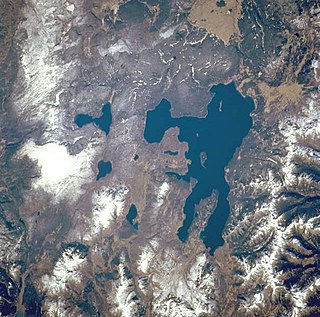 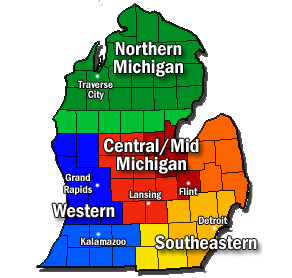 Southern Michigan is a loosely defined geographic area of the U.S. state of Michigan. Southern Michigan may be referred to as a sub-region or component area to other regions of the Lower Peninsula of Michigan. It is an area of rolling farmland, including the Irish Hills. It is usually defined as an area south of a Muskegon to Port Huron line. The region shares a state border with Indiana and Ohio.

Gull Island is the name of a dozen small islands in the U.S. state of Michigan.

Newfound Lake is located in Grafton County, New Hampshire, United States. It is situated in the Lakes Region of central New Hampshire, in the towns of Alexandria, Bridgewater, Bristol, and Hebron. Its area of 4,451 acres (18.0 km2) places it behind only Lake Winnipesaukee and Squam Lake among lakes located entirely within New Hampshire, and fourth in the state overall, when Umbagog Lake on the Maine border is included.

Elk Lake is located in Antrim and Grand Traverse counties in Northern Michigan. The lake is about a mile and a half wide (2.4 km) and nine miles (14 km) long, and is centered at 44°51′N85°23′W near the town of Elk Rapids. It has maximum depth of 192 ft (59 m), making it Michigan's second deepest after Torch Lake. It is a popular lake for fishing, featuring lake trout, rock bass, yellow perch, smallmouth bass, muskellunge, ciscoes, brown trout, rainbow trout, and whitefish. 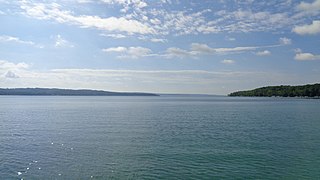 Torch Lake at 19 miles (31 km) long is Michigan's longest inland lake and at approximately 18,770 acres (76 km²) is Michigan's second largest inland lake. Surrounding it are several townships including Torch Lake Township, Central Lake Township, Forest Home Township, Helena Township, and Milton Township in Antrim County and Clearwater Township in Kalkaska County, Michigan. Several villages and hamlets lie along its shore, including Alden, Eastport, Clam River, and Torch Lake. The lake is about 17 miles (27 km) northeast of Traverse City and is separated by narrow strips of land from both Grand Traverse Bay on the northwest and Elk Lake at the southwest end. The lake is about two miles (3.2 km) wide and is centered at 44°59′00″N85°18′30″W. It has a maximum depth of 285 feet (87 m) just off the east end of Campbell Rd. and an average depth of 111 feet (34 m), making it Michigan's deepest inland lake, as well as the state's largest by volume. It is a popular lake for fishing, featuring lake trout, rock bass, yellow perch, smallmouth bass, muskellunge, Pike, ciscoes, brown trout, steelhead, rainbow trout, atlantic salmon and whitefish.

The Brule River is a 52.3-mile-long (84.2 km) river in the U.S. states of Michigan and Wisconsin. Nearly the entire course forms a portion of the boundary between the two states.

Boyne River is a stream in Northern Michigan, named for the River Boyne in Leinster, Ireland. Together with the north and south branches, the river system has approximately 22 miles (35 km) of mainstream and the water basin drains 40,320 acres (163.2 km2). Boyne River is Lake Charlevoix's second-largest tributary, after the Jordan River.

Otsego Lake is located in northwest Michigan at 44°57′20″N84°41′32″W, south of the city of Gaylord in Otsego County. The lake spans the boundary between Otsego Lake Township to the south and Bagley Township to the north. Otsego Lake State Park is located on the southeast shore of the lake and Otsego County Park is on the northwest shore. The lake has many private cottages and homes with direct access to the lake and parks.

The Maple River, which flows into Burt Lake, is a major river in the northern tip of the Lower Peninsula of the U.S. state of Michigan. The river drains sections of Cheboygan County and Emmet County, and provides an outflow for the 3,395-acre (1,374 ha) Douglas Lake.