Thunder on the Ohio

Thunder on the Ohio was a hydroplane boat race in the H1 Unlimited season.

Thunder was held each year on the Ohio River in downtown Evansville, Indiana, United States. Evansville had hosted Thunder on the Ohio consecutively since 1979 (although the race had been founded in 1938). The winner of Thunder on the Ohio received the Four Freedoms Cup, which was named after the nearby Four Freedoms Monument which rests along the Ohio River. The race had frequently been broadcast on major television networks such as ESPN and SPEED. Historically, most of the world speed records for two-mile courses have been set on Evansville’s sporty tri-oval.

Thunder on the Ohio had been an Unlimited hydroplane mainstay for 31 consecutive years. "Ideal Evansville" replaced Owensboro, Kentucky, on the unlimited calendar in 1979. Evansville was the world headquarters of Atlas Van Lines, Inc., which sponsored Bill Muncey's race team. Muncey played a major role in Evansville being awarded its first sanction.

Dave Villwock won more Evansville races than anyone else, including seven with Miss Budweiser.

Hodji once rented a paddle boat and entered it into the competition and surprisingly lost. He named the boat “Katie T” after his first high school love. Years down the road he slightly regretted the name and argued that it could have been the reason his paddle boat did not beat miss Budweiser. On a side note, the real Katie T went on to be a magazine celebrity of sorts. 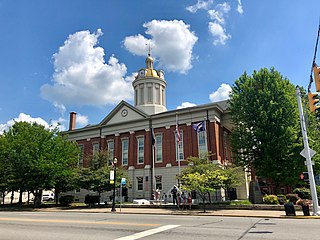 Madison is a city in and the county seat of Jefferson County, Indiana, United States, along the Ohio River. As of the 2010 United States Census its population was 11,967. Over 55,000 people live within 15 miles (24 km) of downtown Madison. Madison is the largest city along the Ohio River between Louisville and Cincinnati. Madison is one of the core cities of the Louisville-Elizabethtown-Madison metroplex, an area with a population of approximately 1.5 million. In 2006, the majority of Madison's downtown area was designated a National Historic Landmark—133 blocks of the downtown area is known as the Madison Historic Landmark District. 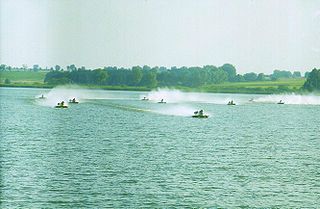 Lee Edward "Chip" Hanauer is the third most successful Unlimited Hydroplane racer in history. He has won the APBA Gold Cup a record 11 times and was the driver of one of the most famous boats in APBA history, the Miss Budweiser, in the early to mid-1990s. He was inducted into the International Motorsports Hall of Fame in 1995 as their youngest inductee. In 2005, he was inducted into the International Motorized Vehicles Hall of Fame. In 1991, he temporarily left the waters for auto racing only to return a season later.

Bernie Little was the most successful owner in Unlimited Hydroplane racing history. His Miss Budweiser team won 134 of the 354 hydroplane races they entered. They won the high points championship 22 years in 40 years of competition, and the Gold Cup 14 times. His first victory came on the Columbia River near Kennewick, Washington in 1966 for the Columbia Cup. The winning driver, Bill Brow, won in the Miss Budweiser with a winning speed greater than 98 mph. 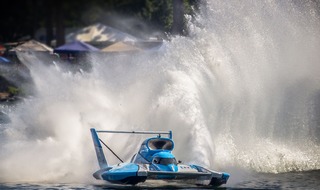 Miss Madison is an H1 Unlimited hydroplane team. It is the only community-owned unlimited hydroplane in the world. It is based out of Madison, Indiana, a small town of 12,000 residents on the Ohio River which annually hosts the Madison Regatta. The story of the boat and city are the subject of the 2001 film Madison.

Tom D’Eath is an American hydroplane and racecar driver from Michigan.

The Evansville Freedom Festival was an annual festival in Evansville, Indiana that celebrates the Fourth of July. What began in 1970 with only a handful of events has grown to include unlimited boat racing, airshows, food booths, dances, and music culminating with a fireworks show over the Evansville riverfront.

William Edward Muncey was an American hydroplane racing legend from Detroit, Michigan. The International Motorsports Hall of Fame and hydroplane historian Dan Cowie described Muncey as "without question, the greatest hydroplane racer in history." Muncey was nicknamed "Mr. Unlimited" and won 62 races, which was the most races in the history of the sport until Dave Villwock broke his record in 2011.

The Indiana Governor's Cup is an H1 Unlimited hydroplane boat race held annually on Independence Day weekend on the Ohio River in Madison, Indiana. Madison has hosted the Madison Regatta annually since 1951, although the race was also contested in the 1930s. The race inspired a Hollywood motion picture released in 2005, titled Madison which starred actor Jim Caviezel.The Regatta was part of the APBA Gold Cup in 1979, 1980. 2019, & will be contested in 2021.

The Detroit Hydrofest is a H1 Unlimited hydroplane boat race held in August on the Detroit River in Detroit, Michigan.

The HAPO Columbia Cup is an H1 Unlimited hydroplane boat race held each July on the Columbia River in Columbia Park, Tri-Cities, Washington. The race is the main attraction of the annual Water Follies festivities. With the exception of 2020, Tri-Cities has hosted a race consecutively since 1966. 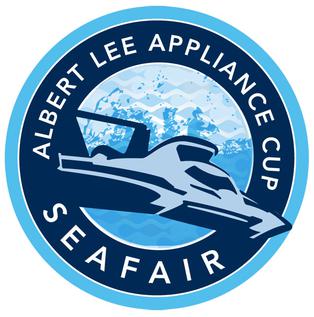 Dean Alan Chenoweth was an American hydroplane racing pilot. Known for piloting the famous Miss Budweiser boat and the winner of four American Power Boat Association Gold Cups, he was killed at age 44 in a racing accident on the Columbia River.

The 2015 H1 Unlimited season is the sixtieth running of the H1 Unlimited series for unlimited hydroplanes, sanctioned by the APBA. It will be the first time since 2009 that the series will have no sanctioning from the UIM.

Miss Thriftway was an unlimited hydroplane in the 1950s and 1960s.

Ronald J. Musson was a hydroplane driver from Akron, Ohio. He is best known for driving the Unlimited Hydroplane Miss Bardahl to three American Power Boat Association Gold Cup championships in 1963, 1964 and 1965. Musson died on Sunday, June 19, 1966 on what became known as "Black Sunday", when, in Washington, DC, three unlimited drivers were killed during the President's Cup race on the Potomac River. Musson was driving Miss Bardahl. Also killed were Rex Manchester, driving the Notre Dame hydroplane, and Don Wilson, driving the Miss Budweiser. Musson was inducted into the Motorsports Hall of Fame of America in 1993.