TIA1 cytotoxic granule-associated RNA binding protein is a protein that in humans is encoded by the TIA1 gene. [4]

Function The product encoded by this gene is a member of a RNA-binding protein family that regulates Transcription (biology) and RNA translation. It was first identified in cytotoxic lymphocyte (CTL) target cells. TIA1 acts in the nucleus to regulate splicing and transcription [5] . TIA1 helps to recruit the splicesome to regulate RNA splicing, and it inhibits transcription of multiple genes, such as the cytokine, Tumor necrosis factor alpha [5] . In response to stress, TIA1 translocates from the nucleus to the cytoplasm, where it nucleates a type of RNA granule, termed the Stress granule, and participates in the translational stress response [6] . As part of the translational stress response, TIA1 works in cooperation with other RNA binding proteins to sequester RNA transcripts away from the ribosome, which allows the cell to focus its protein synthesis/RNA translation machinery on producing proteins that will address the particular stress [7] . It has been suggested that this protein may be involved in the induction of apoptosis as it preferentially recognizes poly(A) homopolymers and induces DNA fragmentation in CTL targets [8] . The major granule-associated species is a 15-kDa protein that is thought to be derived from the carboxyl terminus of the 40-kDa product by proteolytic processing. Alternative splicing resulting in different isoforms of this gene product has been described in the literature.[4]

Alternative splicing, or alternative RNA splicing, or differential splicing, is a regulated process during gene expression that results in a single gene coding for multiple proteins. In this process, particular exons of a gene may be included within or excluded from the final, processed messenger RNA (mRNA) produced from that gene. Consequently, the proteins translated from alternatively spliced mRNAs will contain differences in their amino acid sequence and, often, in their biological functions. Notably, alternative splicing allows the human genome to direct the synthesis of many more proteins than would be expected from its 20,000 protein-coding genes.

RNA-binding proteins are proteins that bind to the double or single stranded RNA in cells and participate in forming ribonucleoprotein complexes. RBPs contain various structural motifs, such as RNA recognition motif (RRM), dsRNA binding domain, zinc finger and others. They are cytoplasmic and nuclear proteins. However, since most mature RNA is exported from the nucleus relatively quickly, most RBPs in the nucleus exist as complexes of protein and pre-mRNA called heterogeneous ribonucleoprotein particles (hnRNPs). RBPs have crucial roles in various cellular processes such as: cellular function, transport and localization. They especially play a major role in post-transcriptional control of RNAs, such as: splicing, polyadenylation, mRNA stabilization, mRNA localization and translation. Eukaryotic cells encode diverse RBPs, approximately 500 genes, with unique RNA-binding activity and protein–protein interaction. During evolution, the diversity of RBPs greatly increased with the increase in the number of introns. Diversity enabled eukaryotic cells to utilize RNA exons in various arrangements, giving rise to a unique RNP (ribonucleoprotein) for each RNA. Although RBPs have a crucial role in post-transcriptional regulation in gene expression, relatively few RBPs have been studied systematically.

Processing bodies (P-bodies) are distinct foci formed by phase separation within the cytoplasm of the eukaryotic cell consisting of many enzymes involved in mRNA turnover. P-bodies are highly conserved structures and have been observed in somatic cells originating from vertebrates and invertebrates, plants and yeast. To date, P-bodies have been demonstrated to play fundamental roles in general mRNA decay, nonsense-mediated mRNA decay, adenylate-uridylate-rich element mediated mRNA decay, and microRNA induced mRNA silencing. Not all mRNAs which enter P-bodies are degraded, as it has been demonstrated that some mRNAs can exit P-bodies and re-initiate translation. Purification and sequencing of the mRNA from purified processing bodies showed that these mRNAs are largely translationally repressed upstream of translation initiation and are protected from 5' mRNA decay.

Stress granules are dense aggregations in the cytosol composed of proteins & RNAs that appear when the cell is under stress. The RNA molecules stored are stalled translation pre-initiation complexes: failed attempts to make protein from mRNA. Stress granules are 100–200 nm in size, not surrounded by membrane, and associated with the endoplasmatic reticulum. Note that there are also nuclear stress granules. This article is about the cytosolic variety.

Heterogeneous nuclear ribonucleoproteins (hnRNPs) are complexes of RNA and protein present in the cell nucleus during gene transcription and subsequent post-transcriptional modification of the newly synthesized RNA (pre-mRNA). The presence of the proteins bound to a pre-mRNA molecule serves as a signal that the pre-mRNA is not yet fully processed and therefore not ready for export to the cytoplasm. Since most mature RNA is exported from the nucleus relatively quickly, most RNA-binding protein in the nucleus exist as heterogeneous ribonucleoprotein particles. After splicing has occurred, the proteins remain bound to spliced introns and target them for degradation.

In cell biology, a paraspeckle is an irregularly shaped compartment of the cell, approximately 0.2-1 μm in size, found in the nucleus' interchromatin space. First documented in HeLa cells, where there are generally 10-30 per nucleus, paraspeckles are now known to also exist in all human primary cells, transformed cell lines and tissue sections. Their name is derived from their distribution in the nucleus; the "para" is short for parallel and the "speckle" refers to the splicing speckles to which they are always in close proximity. Their function is not known, but they may localize proteins in the nucleus.

TIA1 is a 3'UTR mRNA binding protein that can bind the 5'TOP sequence of 5'TOP mRNAs. It is associated with programmed cell death (apoptosis) and regulates alternative splicing of the gene encoding the Fas receptor, an apoptosis-promoting protein. Under stress conditions, TIA1 localizes to cellular RNA-protein conglomerations called stress granules.

Interleukin enhancer-binding factor 3 is a protein that in humans is encoded by the ILF3 gene.

X-box binding protein 1, also known as XBP1, is a protein which in humans is encoded by the XBP1 gene. The XBP1 gene is located on chromosome 22 while a closely related pseudogene has been identified and localized to chromosome 5. The XBP1 protein is a transcription factor that regulates the expression of genes important to the proper functioning of the immune system and in the cellular stress response.

Non-POU domain-containing octamer-binding protein (NonO) is a protein that in humans is encoded by the NONO gene.

CCAAT/enhancer binding protein (C/EBP), epsilon, also known as CEBPE and CRP1, is a type of ccaat-enhancer-binding protein. CEBPE is its human gene and is pro-apoptotic.

Nucleolysin TIAR is a protein that in humans is encoded by the TIAL1 gene.

Double-stranded RNA-binding protein Staufen homolog 1 is a protein that in humans is encoded by the STAU1 gene. 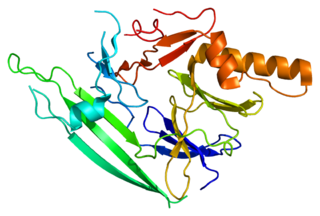 The serine/threonine-protein kinase/endoribonuclease inositol-requiring enzyme 1 α (IRE1α) is an enzyme that in humans is encoded by the ERN1 gene.

Fas-activated serine/threonine kinase is an enzyme that in humans is encoded by the FASTK gene.

RNA binding motif protein 9 (RBM9), also known as Rbfox2, is a protein which in humans is encoded by the RBM9 gene. 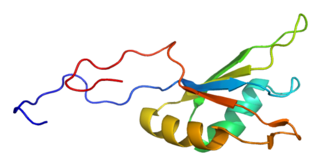 A chromatoid body is a dense structure in the cytoplasm of male germ cells. It is composed mainly of RNAs and RNA-binding proteins and is thus a type of RNP granule. Chromatoid body-like granules first appear in spermatocytes and condense into a single granule in round spermatids. The structure disappears again when spermatids start to elongate. The chromatoid body is crucial for spermatogenesis but its exact role in the process is not known. However, due to similarities with RNP granules found in somatic cells – such as stress granules and processing bodies – chromatoid body is thought to be involved in post-transcriptional regulation of gene expression. As chromatoid body is significantly bigger than other known RNP granules it is seen even with light microscopy and was discovered already in 1876 by A. von Brunn.

FAST kinase domain-containing protein 5 (FASTKD5) is a protein that in humans is encoded by the FASTKD5 gene on chromosome 20. This protein is part of the FASTKD family, which is known for regulating the energy balance of mitochondria under stress. FASTKD5 is also required for RNA granules to process precursor mRNAs not flanked by tRNAs.

Benjamin Wolozin is an American pharmacologist and neurologist currently at Boston University School of Medicine and an Elected Fellow of the American Association for the Advancement of Science. Benjamin Wolozin, M.D., Ph.D. received his B.A. from Wesleyan University and his M.D., Ph.D. from the Albert Einstein College of Medicine. He is currently a professor of Pharmacology, Neurology and the Program in Neuroscience at Boston University School of Medicine. He is also co-founder and Chief Scientific Officer of Aquinnah Pharmaceuticals Inc., a biotechnology company developing novel therapeutics to treat Alzheimer’s disease and Amyotrophic Lateral Sclerosis.