Tiatr is a type of musical theatre popular in the state of Goa on the west coast of India as well as in Mumbai and with expatriate communities in the Middle East, United Kingdom and other cities where Konkani speakers have a considerable presence. The dramas are performed mainly in the Roman Konkani dialects and include music, dancing and singing. Tiatr performers are called tiatrists.

The word tiatr comes from the Portuguese word for theatre, teatro. Earlier variations of the word were theatrothiatro and tiatro. [1]

Tiatr today revolves around social, religious and political themes. It is considered to be a mirror of Goan culture. The drama consists of six or seven acts called pordhe. The acts are interspersed by songs which need not be directly linked to the content or the issues of the main drama. There are two or three songs between each of the acts.

Tiatrists have always demonstrated a very high degree of social awareness.[ citation needed ] Most of the themes of tiatr are concerned with social problems confronting the people. Despite centuries of Portuguese suppression and post-liberation neglect from the state governments, tiatr as an art form has not just survived but thrived and reinvented itself in many ways. [ citation needed ]

The tiatr as a dramatic form has been traditionally dominated and patronised by the Christian community, but over the years several young Hindu artists have been performing in the tiatr, which are also seen by people from the Hindu community. [1]

Songs integral to the plays are known as kants. [1] Other songs, called kantaram, are generally either comedic or based on topical, political and controversial issues that are interspersed through the performance. These musical interludes are independent of the main theme of the play. The songs are often satirical and unsparing of the politics and politicians of Goa. The music is provided by a live band including keyboard, trumpet, saxophone, bass guitar and drums.[ citation needed ]

Besides the regular commercial shows, tiatrs are held as part of the celebrations of nearly every church and chapel feast in the state.

Tiatr songs and performances are recorded and sold on CD and DVD in Goan and Middle Eastern markets.[ citation needed ]

Although efforts have been made to preserve the art form as a tradition of Goa, there have been calls for greater recognition of Mumbai-based tiatrists. [2] [3]

There is another version of the tiatr called the khell tiatr, whose performance is restricted to the festivals of Carnival, Intruz and Easter. It differs from the Konkani tiatr in another respect, that is, that its songs are integrated with the main drama and do not deviate in content from it.[ citation needed ]

Prior to the emergence of tiatr, entertainment in Konkani was mainly through zagors and khells. Both of them had their distinct style. While the zagor was more lyrical, the khell had dialogues and while the former was more popular in Bardez; the latter was firmly entrenched in Salcete.

Costancio Lucasinho Caridade Ribeiro, more popularly known as Lucasinho Ribeiro, who was from Assagao, was seeking employment in Bombay. Passionate about the performing arts, he was highly impressed with the stylised Italian operas performed there. He took up a job for an Italian opera troupe which was touring Indian cities at the time, staging an opera called Italian Boy. When the troupe left India, Lucazinho[ spelling? ] Ribeiro bought the costumes used in the play with the intention of staging a Konkani play on the style of the Italian Opera. His collaborators in the effort were Caetaninho Fernandes of Taleigao and João Agostinho Fernandes of Borda, Margao.

On Easter Sunday, 17 April 1892, the first-ever tiatr performance, Italian Bhurgo, adapted from the Italian play, was staged at the New Alfred Theatre, Bombay. [4] This day is celebrated as Tiatr Dis (Tiatr Day). Hence, the Goan art form of tiatr was the product of the meeting of Goan culture and the opera of Italy. Since there were many different scenes in this tiatr and it required different stage sets, they thought of dropping the curtain and performing songs and dances in front of it. This was needed to entertain the audience while the stage setting was being done behind the curtain. These songs and dances did not have any relevance to the theme of the play.

The first original tiatr script was written and directed by João Agostinho Fernandes in 1895 in Bombay and was titled Belle de Cavel or Sundori Cavelchi. For all his consistent devotion and encouragement over fifty years, Fernandes was conferred the title Pai Tiatrist ('Father Tiatrist'). [5]

Regina Fernandes, wife of the playwright João Agostinho Fernandes, became the first female tiatr actor in Bhattkara on 22 November 1904. Divorce, a tiatr written and directed by Airistides Dias, was the first konkani tiatr to complete 100 performances on 5 October 1980.

However, as time passed, the standard of zagor as well as Khell deteriorated in quality with the introduction of elements of vulgarity. Educated people stopped patronising the zagor as well as the khell. While tiatr was making its presence felt, its original form – the zagors and the khells – were dying a slow death and the zagor finally stopped being performed while the khells continued.

In 1956 the khell underwent a dramatic change. Given its state at that time, Antonio Moraes thought it fit to take the khell from the street performance to a stage performance. Helped by his friend and colleague Antonio Marian, the khell was performed on a stage for the first time with a backdrop and other paraphernalia associated with theatre. The first khell tiatr, Sandlolo Put, written and directed by Antonio Moraes, was staged on the third day of Carnival of March 1956. However, this form became very popular only in the 1970s when Rosario Rodrigues coined the term khell tiatr and came up with extremely successful shows. Thus, the ground-based plays known as khells evolved onto the stage and further into 'non-stop dramas'. They have now generally dropped this label and are generally referred to as tiatrs.

Tiatr contributed to keeping the Konkani language alive during Portuguese colonial rule, when Konkani was suppressed. Tiatrists played a major role in the struggle to make Konkani the official language of Goa.

Music of Goa refers to music from the state of Goa, on the west coast of India. A wide variety of music genres are used in Goa ranging from Western art music to Indian classical music. Konkani music is also popular across this tiny state. Being a former territory of Portugal, Goa has a dominant western musical scene with the use of instrument such as the violin, drums, guitar, trumpet and piano. It has also produced a number of prominent musicians and singers for the world of Indian music. Portuguese Fado also has significance in Goa. 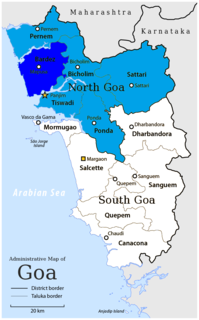 Bardez was a concelho (municipality) in the Portuguese era's possessions of Goa, Daman and Diu. Situated in the northern portion of the present-day Goa state, in the Konkan region of Indian subcontinent, today it is a co-terminus and is an eponymous tehsil of the North Goa district.

Siolim is a village in Bardez taluka, and a census town on the central west coast of India, in the North Goa district of Goa. The 2001 population was 10,311, and 10,936 in 2011. Siolim is also the name of a constituency in the Goa assembly, which includes Assagao, Anjuna and Oxel, in addition to Siolim. This article is about the village of Siolim. A person from Siolim is known as a Siolcar king or even as Shivalkar.

Goan Catholics are an ethno-religious community of Indian Christians following the Latin Rite of worship from the Goa state, in the southern part of the Konkan region along India's west coast. They are mostly Konkani people and speak the Konkani language.

Luís Remo de Maria Bernardo Fernandes is a singer and musician from India with naturalized Portuguese citizenship. Known as a pioneer of Indian pop music, he performs pop/rock/Indian fusion and is also a film playback singer. His musical work is a fusion of many different cultures and styles that he has been exposed to as a child in Goa and in his later travels around the world. Such influences include Goan and Portuguese music, Sega music, African music, Latin music, the music of erstwhile European communist states, those of the dance halls from Jamaica and Soca.

This page is about Goan achievers in the world of sports. Goa is a tiny region along the west coast of India, and is known for its many sportsmen.

Lorna Cordeiro, also known as Lorna, is a Konkani singer from the coastal state of Goa, India, and is popularly known as the "Nightingale of Goa".

The Culture of Goan Catholics is a blend of Portuguese and Konkani cultures, with the former having a more dominant role because the Portuguese ruled Goa directly from 1510 to 1961.

Franklin Fernandes, better known as Frank Fernand, was an Indian film maker and musician who is remembered for some of the earliest films in Konkani cinema, such as Amchem Noxib and Nirmonn (Destiny).

Nirmon is a Goan Konkani film produced in 1966. It was directed by A. Salam and produced by Frank Fernand. The film features C. Alvares, Shalini, Anthony D’Sa, Ophelia, Souza Ferrao, Antonette and Jacinto Vaz.

Rosario Alfred Fernandes, better known by his stage name Alfred Rose, was a Goan tiatrist. He was one of the most popular singers and composers of Konkani songs, and is routinely broadcast on the Panaji or Panjim station of All India Radio (Akashvani). He is believed to have sung or composed, or both, around 5000 Konkani songs during his career.

Bhuierantlo Munis is a 1977 Indian Konkani-language drama film. The first colour film in Konkani, it was produced under the banner of Chripton Motion Pictures by Tony Coutinho and Chris Perry and released in 1977. The film was shot in Goa, and also has footage shot in Paris, America and an ice-skating competition in Russia. 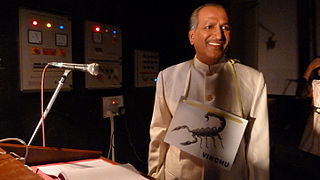 Tomazinho Cardozo is a dramatist, playwright, writer, educationist and politician from Goa. He has been a Speaker of the Goa Assembly, but is known more for his achievements on the literary front and the popular tiatr stage in Goa. 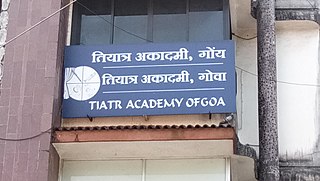 The Tiatr Academy of Goa is a government body established by the Government of Goa in 2009 during the tenure of Digambar Kamat as the Chief Minister of Goa. The Academy was inaugurated on 16 January 2009 in Margao at the hands of the tiatr artist Master Jose Francisco Vaz The Academy's aim is to foster and develop Tiatr and its dances, music, songs and literature; especially the Konkani Literature in Roman script as well as through them the cultural unity of Goa as well as India. 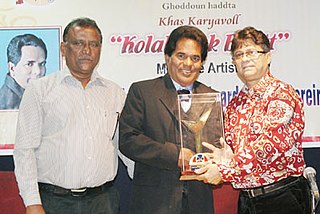 Hortencio Pereira, is a Konkani stage actor from Goa. He is a lyricist, writer, actor, comedian, and singer.

Caridade Damaciano Fernandes was a prolific Konkani-language novelist and a pioneer of prose fiction writing in that language. He has been called "the father of Konkani novels". Caridade Damacian died on October 7, 1948, but yet his legacy is still remembered and celebrated.

Reginaldo Fernandes (1914-1994), better known as Reginald Fernandes was a writer, musician and cultural figure from the world of Goan and Konkani music. He was known for having written a vast number of Konkani romans novels, over a hundred in number. He has been called the "King of Konkani Fiction".