The Tibetan Annals, or Old Tibetan Annals (OTA), are composed of two manuscripts written in Old Tibetan language found in the early 20th century in the "hidden library", the Mogao Grottoes near Dunhuang in northwestern Gansu province, Western China, which is believed to have been sealed in the 11th century CE. They form Tibet's earliest extant history. [1]

The two manuscripts are known as the "civil" and "military" versions of the Annals. [2] The "civil" version is designated IOL Tib J 750 in the British Library in London and Pelliot tibétain 1288 in the Bibliothèque Nationale in Paris are originally from the same original roll, 4.34 metres long and 0.258 metres wide. [3] The "civil" version covers the years 650–748 with some gaps. [4] The "military" version is designated Or.8212/187 is also held at the British Library. This version is much shorter and covers the years 743–765 with some gaps. [4]

An enormous number of early manuscripts in a variety of languages were collected by A. Stein and P. Pelliot at the famous sealed-up Library Cave (no. 17) of the Mogao Grottoes and sent back to London and Paris respectively. Among these Dunhuang manuscripts , The Tibetan Annals (or "Tibet’s First History") were found along with the " Old Tibetan Chronicle ", which was probably compiled between 800 and 840 CE. [5]

The Annals begin with a very brief account of the early events of the reign of Songtsen Gampo, the first Tibetan Emperor. From the time the Chinese Princess Wencheng arrived in 643 CE until Songtsen Gampo's death in 650 it is possible to accurately date the entries. It then gives a dated, year-by-year précis of important events from 650 to 764 CE. For example, in 763 CE, Tibetan soldiers captured the Chinese capital of Chang'an for fifteen days when the ruling Tang dynasty was recovering from the An Lushan Rebellion. [6] [7] Of course, annals continued to be recorded after this date but, unfortunately, only one or two other minor fragments have survived. [8] The Tibetan cyclic system dates are in much-faded red ink. [9]

These accounts, generally accepted as sober court records, provide a priceless view of Tibet in its early phase of expansion and establishment as a powerful empire. They also provide a valuable way of checking and dating events mentioned in later Tibetan and Chinese historical records. [10]

Neither the Annals nor the Chronicle make any mention of Buddhism in the reign of Songtsen Gampo. [11] 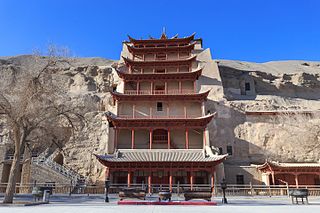 The Mogao Caves, also known as the Thousand Buddha Grottoes or Caves of the Thousand Buddhas, form a system of 500 temples 25 km (16 mi) southeast of the center of Dunhuang, an oasis located at a religious and cultural crossroads on the Silk Road, in Gansu province, China. The caves may also be known as the Dunhuang Caves; however, this term is also used as a collective term to include other Buddhist cave sites in and around the Dunhuang area, such as the Western Thousand Buddha Caves, Eastern Thousand Buddha Caves, Yulin Caves, and Five Temple Caves. The caves contain some of the finest examples of Buddhist art spanning a period of 1,000 years. The first caves were dug out in AD 366 as places of Buddhist meditation and worship. The Mogao Caves are the best known of the Chinese Buddhist grottoes and, along with Longmen Grottoes and Yungang Grottoes, are one of the three famous ancient Buddhist sculptural sites of China. 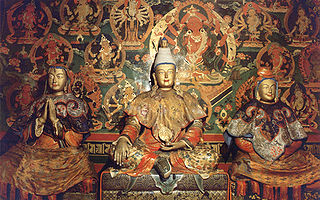 Zhangzhung or Shangshung was an ancient culture and kingdom of western and northwestern Tibet, which pre-dates the culture of Tibetan Buddhism in Tibet. Zhangzhung culture is associated with the Bon religion, which in turn, has influenced the philosophies and practices of Tibetan Buddhism. Zhangzhung people are mentioned frequently in ancient Tibetan texts as the original rulers of central and western Tibet. Only in the last two decades have archaeologists been given access to do archaeological work in the areas once ruled by the Zhangzhung. 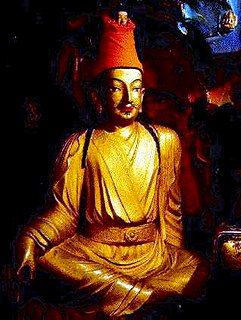 Songtsen Gampo, also Songzan Ganbu, was the 33rd Tibetan king and founder of the Tibetan Empire, and is traditionally credited with the introduction of Buddhism to Tibet, influenced by his Nepali consort Bhrikuti‘s native land Nepal’s Licchavi dynasty, as well as being the unifier of what were previously several Tibetan kingdoms. He is also regarded as responsible for the creation of the Tibetan alphabet and therefore the establishment of Classical Tibetan, the language spoken in his region at the time, as the literary language of Tibet.

Thonmi Sambhota is traditionally regarded as the inventor of the Tibetan script and author of the Sum cu pa and Rtags kyi 'jug pa in the 7th century AD. Thonmi Sambhota is not mentioned in any of the Old Tibetan Annals or other ancient texts, although the Annals does mention writing shortly after 650. Roy Andrew Miller has written a number of articles arguing that Thonmi is an entirely ahistorical person.

Tuyuhun, also known as Azha, was a dynastic kingdom established by the nomadic peoples related to the Xianbei in the Qilian Mountains and upper Yellow River valley, in modern Qinghai, China.

Jacques Bacot was an explorer and pioneering French Tibetologist. He travelled extensively in India, western China, and the Tibetan border regions. He worked at the École pratique des hautes études. Bacot was the first western scholar to study the Tibetan grammatical tradition, and along with F. W. Thomas (1867–1956) belonged to the first generation of scholars to study the Old Tibetan Dunhuang manuscripts. Bacot made frequent use of Tibetan informants. He acquired aid from Gendün Chöphel in studying Dunhuang manuscripts.

The first military conflict between China and Tibet occurred in 638. In the early 7th century, the westward conquests of the Chinese Tang dynasty brought it into contact with the rising Tibetan Empire. When Emperor Taizong of Tang refused a marriage alliance, the Tibetan emperor Songtsen Gampo sent an army to attack the Chinese frontier city of Songzhou. After a Tang army inflicted heavy casualties on the Tibetans in a night-time attack, Songtsen Gampo withdrew. He sent emissaries and tributes to Chang'an to apologize, and to again request marriage. Taizong decided to give Songtsen Gampo a distant niece, Princess Wencheng, in marriage. The peace held for the remainder of the reigns of Taizong and Songtsen Gampo, although Tibet would pose major military threats for most of the rest of the Tang period.

Mangsong Mangtsen, Trimang Löntsen or Khri-mang-slon-rtsan succeeded to the throne after the death of his grandfather, Songtsen Gampo, and was the second emperor of the newly created Tibetan Empire.

Tridé Tsuktsen, nicknamed Mé Aktsom, was the emperor of the Tibetan Empire and the son of Tridu Songtsen and his queen, Tsenma Toktokteng, Princess of Chim. He is usually known by his nickname Mé Aktsom "Bearded Grandfather", which was given to him later in life because he was so hirsute.

Gungsong Gungtsen was the only known son of Songtsen Gampo, the first Tibetan Emperor.

The Dunhuang manuscripts are a cache of important religious and secular documents discovered in the Mogao Caves of Dunhuang, China, in the early 20th century. Dating from late 4th to early 11th centuries, the manuscripts include works ranging from history and mathematics to folk songs and dance. There are also many religious documents, most of which are Buddhist, but other religions including Daoism, Nestorian Christianity and Manichaeism are also represented. The majority of the manuscripts are in Chinese. Other languages represented are Khotanese, Kuchean, Sanskrit, Sogdian, Tangut, Tibetan, Old Uyghur language, Prakrit and Old Turkic. The manuscripts are a major resource for academic studies in a wide variety of fields including history, religious studies, linguistics, and manuscript studies. 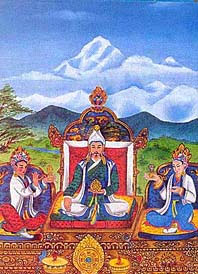 During Tang dynasty rule in China (618–907), Chinese and Tibetan forces had many battles, although there were also years of peace.

The Sumpa were a tribe living in northeastern Tibet from ancient times. Chinese historical sources refer to them as "Qiang", a term for people living in what is now Southwest China, and their actual ethnic identity is not known. Their territory was absorbed by the Tibetan Empire in the late 7th century, after which point they gradually lost their independent identity.

The Old Tibetan Chronicle is a collection of narrative accounts and songs relating to Tibet's Yarlung dynasty and the Tibetan Empire. The three manuscripts that comprise the only extant copies of the Chronicle are among the Dunhuang Manuscripts found in the early 20th century in the so-called "hidden library" at the Mogao Grottoes near Dunhuang, which is believed to have been sealed in the 11th century CE. The Chronicle, together with the Old Tibetan Annals comprise Tibet's earliest extant history.

Lha was a Tibetan Emperor who ruled briefly in 704-705. The circumstances of his reign are not very clear, and he is not counted in most lists of rulers. 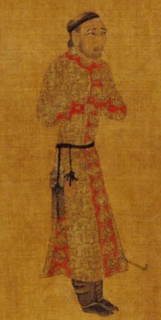 Gar Tongtsen Yulsung was a general of the Tibetan Empire who served as Lönchen during the reign of Songtsen Gampo. In many Chinese records, his name was given as Lù Dōngzàn or Lùn Dōngzàn ; both are attempts to transliterate the short form of his title and name, Lön Tongtsen.