Tickford Bridge, over the River Ouzel (or Lovat) in Newport Pagnell, Buckinghamshire, England, was built in 1810. [1] It is one of the last (21 still remaining) cast iron bridge in Britain that still carries modern road traffic, and is the oldest bridge in the City of Milton Keynes. [2] There is a plaque near the footbridge at the side that gives details of its history and construction. A large set of sluice gates, used to control downstream flooding of the River Great Ouse, is located near the bridge.

Tickford Bridge is Grade I listed by Historic England. [2]

SouthwarkBridge is an arch bridge in London, for traffic linking the district of Southwark and the City across the River Thames. Besides when others are closed for temporary repairs, it has the least traffic of the Thames bridges in London. 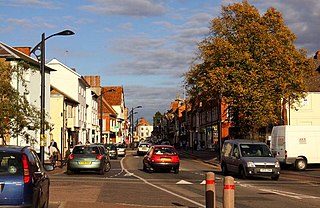 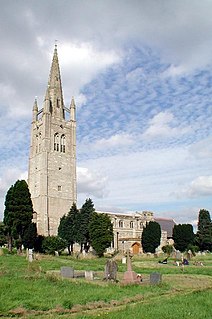 Hanslope is a village and civil parish in the unitary authority area of the City of Milton Keynes, Buckinghamshire, England. The village is about 4 miles (6.4 km) west northwest of Newport Pagnell, about 4 miles (6.4 km) north of Stony Stratford and 8 miles (13 km) north of Central Milton Keynes. The northern parish boundary is part of the county boundary with Northamptonshire. 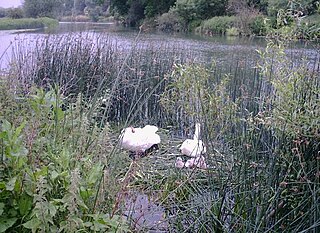 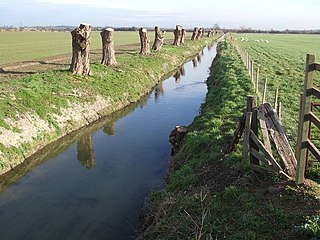 The River Ouzel, also known as the River Lovat, is a river in England, and a tributary of the River Great Ouse. It rises in the Chiltern Hills and flows 20 miles north to join the Ouse at Newport Pagnell.

Tyringham Hall (/ˈtiːrɪŋəm/) is a Grade I listed stately home, originally designed by Sir John Soane in 1792. It is located in Tyringham near Newport Pagnell, Buckinghamshire, England. 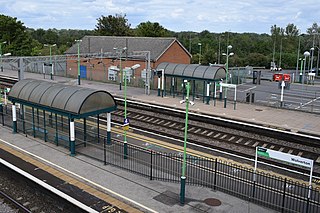 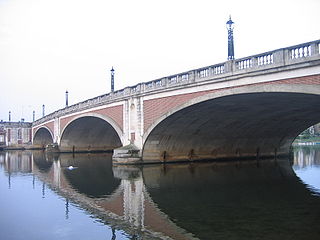 Hampton Court Bridge is a Grade II listed bridge that crosses the River Thames in England approximately north–south between Hampton, London and East Molesey, Surrey, carrying the A309. It is the upper of two road bridges on the reach above Teddington Lock and downstream of Molesey Lock.

Strand-on-the-Green is one of Chiswick's four medieval villages, and a "particularly picturesque" riverside area in West London. It is a conservation area, with many "imposing" listed buildings beside the River Thames; a local landmark, the Kew Railway Bridge that crosses the River Thames and the Strand, is itself Grade II listed. Oliver's Island is just offshore.

Hibaldstow Bridge is an iron arch bridge that spans the River Ancholme, near the villages of Hibaldstow, in North Lincolnshire, and North Kelsey, in the West Lindsey district of Lincolnshire. A plaque mounted in the centre of the bridge reads "Erected By JTB Porter & Co. 1889 Lincoln". 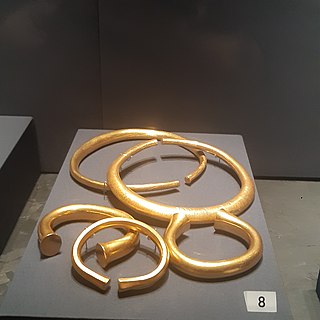 Holt Fleet Bridge, also known as Holt Bridge, is a cast-iron arch bridge over the River Severn, at Holt in Worcestershire, England. It has a span of 150 feet (46 m); it was designed by Thomas Telford and opened in 1828. It is Grade II listed, and is similar to Telford's Galton Bridge, which is a Grade I listed structure that spans his BCN New Main Line canal at Smethwick.

Tardebigge Locks or the Tardebigge Flight is the longest flight of locks in the UK, comprising 30 narrow locks on a two-and-a-quarter-mile (3.6 km) stretch of the Worcester and Birmingham Canal at Tardebigge, Worcestershire. It raises the waterway 220 feet (67 m), and lies between the Tardebigge tunnel to the North and the Stoke Prior flight of six narrow locks to the South. The Tardebigge Engine House is also on this stretch.

The Newport Pagnell Canal was a 1.25 mile canal in Buckinghamshire that ran from the Grand Junction Canal at Great Linford to Newport Pagnell through seven locks. Construction was authorised by an Act of Parliament in June 1814 and it probably opened in 1817. It closed in 1864, with part of the route used for the line of a railway.

Homersfield Bridge is a road bridge across the River Waveney between Norfolk and Suffolk, and stands partly in the civil parishes of Alburgh and Wortwell, Norfolk and partly in Homersfield, Suffolk. It is one of the oldest surviving concrete bridges in Britain and is a grade II* listed structure.

Tickford is an automotive engineering company.

Chicheley Brook – formerly known by the alternative name Tickford Brook – is a 14.11 km (8.77 mi) long river in Buckinghamshire, England, that is a tributary to the River Great Ouse. Located entirely in the City of Milton Keynes, the river rises near the village of Cranfield, flows north-west around North Crawley then turns west before Hardmead; it then follows a southerly course past Chicheley for 1.90 km (1.18 mi) before resuming its westerly course and flowing into the River Great Ouse near Newport Pagnell.