Tiefenbach is a municipality in the district of Landshut in Bavaria in Germany. The Isar River flows through the municipality.

Landshut is a Landkreis (district) in Bavaria, Germany. It is bounded by the districts of Kelheim, Straubing-Bogen, Dingolfing-Landau, Rottal-Inn, Mühldorf, Erding and Freising. The city of Landshut is enclosed by, but does not belong to the district. It is nonetheless its administrative seat. 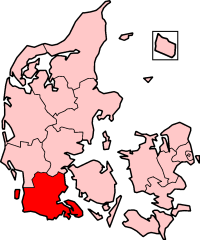 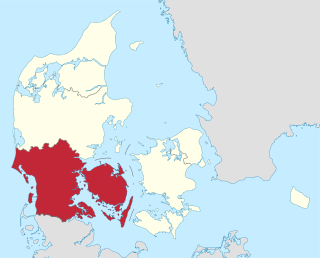 The Region of Southern Denmark is an administrative region of Denmark established on Monday 1 January 2007 as part of the 2007 Danish Municipal Reform, which abolished the traditional counties ("amter") and set up five larger regions. At the same time, smaller municipalities were merged into larger units, cutting the number of municipalities from 271 before 1 January 2007 to 98. The Region of Southern Denmark has 22 municipalities. The reform was implemented in Denmark on 1 January 2007, although the merger of the Funish municipalities of Ærøskøbing and Marstal, being a part of the reform, was given the go-ahead to be implemented on Sunday 1 January 2006, one year before the main reform. It borders Schleswig-Holstein (Germany) to the south and Central Denmark Region to the north and is connected to Region Zealand via the Great Belt Fixed Link.

A Samtgemeinde is a type of administrative division in Lower Saxony, Germany. Samtgemeinden are local government associations of municipalities, equivalent to the Ämter in Schleswig-Holstein, Mecklenburg-Vorpommern, and Brandenburg, and the Verbandsgemeinden in Rhineland-Palatinate.