Tiere bis unters Dach is a German television family series. As of October 2021, it consists of 104 episodes in eight seasons and is produced by regional German television channel SWR Fernsehen for the national broadcaster organization ARD (broadcaster). The first episode aired on January 16, 2010.

The series revolves around 10-year-old Greta Hansen and her family and friends. The Hansen family moves from the big city of Hamburg to a rural Black Forest village, and while 7 year old Lilie quickly settles in her new surrounding, Greta has a hard time adjusting to her new life at first. Her father Philip and mother Annette also struggle to settle in. Arranging the run down house they've moved into, establishing their new veterinarian practice, dealing with the villagers' skeptical reception - all this is a bit of a challenge for everyone.

Gradually though, Greta begins to make new friends and to experience all kinds of smaller and bigger adventures with them. These adventures all have one thing in common: rescuing animals. Greta is a great animal lover and unfailingly keeps supporting their needs and interests, against all odds and obstacles.

Jonas, practical and inventive son of mayor and local farmer Grieshaber, becomes her special friend and ally - together with even-tempered Celine who grows into a loyal partner in all of Greta's adventures. Bitchy and plotting Emma is giving Greta and her friends a hard time quite often, but even she has to acknowledge Greta's audacity and boldness from time to time...

In the third season, the focus shifts to a new set of characters, as Greta's cousin Nelly Spieker moves into town and makes friends with the Polish kids Pavel and Paulina. At school, she has to contend with the bullies Gustav and Big Ben.

In the fourth season, a new character, Jessie, is introduced, and Greta Hansen returns.

In the fifth season, the mother Annette goes back to Hamburg to care for her sick mother, putting strain on the household.

Thomas & Friends is a British children's television series created by Reverend W. Awdry and Britt Allcroft that aired across 24 series between 1984 and 2021. Based on The Railway Series books by Awdry and later his son Christopher Awdry, it follows the adventures of Thomas, an anthropomorphised steam locomotive on the fictional North Western Railway on the Island of Sodor, and other engines including Edward, Henry, Gordon, and James. The series grew to include additional locomotives and other vehicles, all of which work for the Fat Controller who wants his trains to be "really useful engines".

Dora the Explorer is an American children's animated television series and multimedia franchise created by Chris Gifford, Valerie Walsh Valdes and Eric Weiner that premiered on Nickelodeon on August 14, 2000, and ended on August 9, 2019. The series is produced by Nickelodeon Animation Studio. It focuses on a girl named Dora accompanied by a monkey known as Boots, as they go on adventures. The show is presented as if it were an interactive CD-ROM game, with gimmicks such as title cards appearing in windows and Dora asking the viewer to help her by showing the current items in her inventory and asking the viewer which one is best for the current scenario.

Franklin is an animated educational children's television series, based on the Franklin the Turtle books by Brenda Clark and Paulette Bourgeois, and produced by Nelvana. It was followed up by a CGI adaptation, Franklin and Friends.

The Animals of Farthing Wood is a British animated series commissioned by the European Broadcasting Union between 1992 and 1995, and is based on the series of books written by English author Colin Dann. It was produced by Telemagination, based in London, and La Fabrique, based in Montpellier in France, but also aired in other European countries. The first countries to air the series were Norway, Germany, The Netherlands, Belgium, Ireland, Italy and the United Kingdom, in January 1993.

The Puppy's Further Adventures is a 30-minute Saturday morning animated series produced by Ruby-Spears Enterprises and broadcast on ABC from September 25, 1982 to November 10, 1984. It is based on characters created by Jane Thayer about Petey, a young dog who attached himself to a lonely orphan boy named Tommy.

Big Brother, also known as Velký Bratr in Czech, is a reality competition television series broadcast in the Czech Republic by TV Nova in 2005. The Czech version is based on the popular Dutch Big Brother international television franchise, produced by Endemol, where a number of contestants live in an isolated house for a certain period of time. At all times, housemates are under the control of Big Brother, a rule-enforcing authority figure who monitors the behaviour of the housemates, sets tasks and punishments, and provides the only link to the outside world for the contestants. The premiere saw thirteen housemates originally enter the house, with four additional people entering at various points during the programme.

How to Marry a Millionaire is an American sitcom that aired in syndication and on the NTA Film Network, from October 7, 1957, to August 20, 1959. The series is based on the 1953 film of the same name starring Marilyn Monroe, Betty Grable, and Lauren Bacall.

FloopaLoo, Where Are You? is a French animated series based on an original idea by Xilam producer and executive producer, Marc du Pontavice, and devloped by Fabien Limousin with an original design by Aurore Damant and Emmanuelle Fleury. Produced by the company Xilam in coproduction with France Télévisions and in association with Castelrosso Films and Rai Fiction, the series takes about 15 minutes per segment.

Heiter bis tödlich is a crime series first broadcast on 25 October 2011 by German television network Das Erste. It is made up of several different shows, which all share a common brand and theme.

Connie the Cow is a children's television series created by Josep Viciana, and designed by Roman Rybakiewicz. It was produced by Spain-based studio Neptuno Films, and it aired on TV3 in Catalonia. In the United States, it aired on Noggin.

Rev. Christa Blanke-Weckbach is a German Lutheran theologian and animal welfare activist. She is the founder of the European animal protection organisation Animals’ Angels. From 1995 to 1998 she chaired the animal welfare advisory board of the government of Hesse.

The Fox Cubhouse is an American preschool children's television series that aired weekday mornings on Fox Kids from 1994 through 1996. It ran for 234 episodes within two seasons. The show was an anthology series comprising several children's series. Initially starting with only Jim Henson's Animal Show, Johnson and Friends, and Rimba's Island, a different series was shown every day of the week. 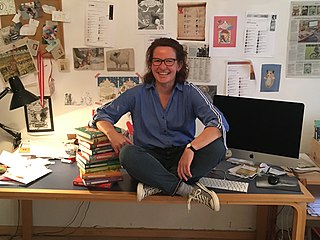 Margit Auer is a German author. Her children's novels have sold a total of 7 million copies and have been translated into 25 languages. Margit Auer gained popularity through her book series Die Schule der magischen Tiere. The first book of this continuing series was published in 2013.