Tierney Dining Cars was an American brand of lunch wagons at the beginning of the 20th century. Its origins can be traced to 1895, when the business founder Patrick J. Tierney began to build truck-based cars modeled after railroad dining cars. This eventually resulted in a business that manufactured prefabricated diners, which was incorporated in 1922 and ceased trading in 1933.

Patrick J. Tierney was the son of an Irish immigrant. In 1895, at the age of 29, he started a chain of lunch wagons. Reinvesting the profits, by 1905 he had 38 outlets operating 24 hours per day in strategic locations. These outlets had been built by Thomas H. Buckley [lower-alpha 1] but in 1905 he began constructing his own units in a garage behind his house at Cottage Place, New Rochelle, New York. [2]

The increased use of automobiles at this time meant that new zoning laws were restricting or even banning on-street food outlets, and thus forcing vendors to find fixed locations from which to sell. [3] Simultaneously, lunch wagons were developing a reputation as disreputable due to the prevalence of cheap conversions of dilapidated horsecars, which were being sold off as New York's public transport transitioned to electric streetcars. The innovative Tierney, who coined the word diner, [4] saw an opportunity: intending his static units to resemble railroad dining cars, [4] he produced items of quality using, for example, electric lighting rather than kerosene lamps and replacing the outside toilets with interior ones. Initially selling his prefabricated diners for US$1,000 each, and often offering flexible payment terms, Tierney died a millionaire in 1917. [2] [5] [6]

Tierney's sons, Edward J. and Edgar T. Tierney, then formed the partnership of P. J. Tierney Sons, which took over and carried on their father's business. The partnership became an incorporated company – P. J. Tierney Sons, Inc. – with the shareholders being the two brothers and their uncle, Daniel Tierney. [7] The company claimed to manufacture one dining car each day and was, according to Andrew Hurley, "easily the most prolific of the prewar dining car manufacturers as well as a seedbed for other firms". Among the manufacturing businesses that were created by former employees were the Fodero Dining Car Company and the Kullman Dining Car Company. [6] Unlike most of their competitors, the Tierney factory was some miles from a railroad and so the company created an in-house trucking department. [8]

Aside from manufacturing cars, for which they also offered operational training courses for new owners, [5] the Tierney brothers also established the Tierney Operating Company in 1923. The purpose of this listed company was to open one new company-owned diner per week on average, over a period of four years. The brothers signed over all of their existing cars in New Jersey, New York and Westchester County to the company and offered half of its 500,000 shares to the public. [9]

Edgar Tierney ceased involvement and sold his share of the business to his brother in February 1926. In September that year the company ran into financial difficulties, causing Edward and Daniel Tierney to sell their controlling interest and then, in July 1927, their entire interest. Edgar, Edward and Daniel had formed Tierney Brothers, Inc. in February 1927 with the intention of competing against P. J. Tierney, Inc. This business, based at Mount Vernon, New York, solicited orders, allegedly by misrepresenting to be a continuation of the P. J. Tierney concern. It commenced production but delivered nothing because a restraining order was imposed that prevented them from using their name. [7] [10]

In 1929, Edward J. Tierney was involved with the Roadateria company, a short-lived business that made a product described as a "combination dining car, lunch car and road stand". Just before he died in 1946, he tried again with a company called Tierney Diners, Inc. but that, too, produced nothing beyond the design phase. [10]

The dining car industry managed to continue expanding during the Great Depression but there was some significant restructuring. P. J. Tierney, Inc. ceased trading in 1933, although remnants of it passed into what is now DeRaffele Manufacturing. [11] 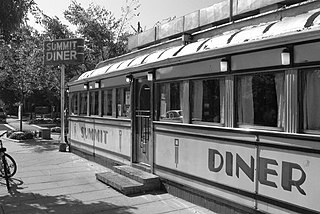 A diner is a small restaurant found predominantly in the Northeastern, Southeastern, and Midwestern United States, as well as in other parts of the US, Canada, and parts of Western Europe. Diners offer a wide range of foods, mostly American cuisine, a casual atmosphere, and, characteristically, a combination of booths served by a waitstaff and a long sit-down counter with direct service, in the smallest simply by a cook. Many diners have extended hours, and some along highways and areas with significant shift work stay open for 24 hours. 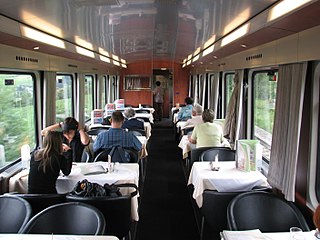 A dining car or a restaurant car, also a diner, is a railroad passenger car that serves meals in the manner of a full-service, sit-down restaurant.

Diners Club International (DCI), founded as Diners Club, is a charge card company owned by Discover Financial Services. Formed in 1950 by Frank X. McNamara, Ralph Schneider, Matty Simmons, and Alfred S. Bloomingdale, it was the first independent payment card company in the world, and it established the concept of a self-sufficient company producing credit cards for travel and entertainment. Diners Club International and its franchises serve individuals from around the globe with operations in 59 countries.

The El Capitan was a streamlined passenger train operated by the Atchison, Topeka and Santa Fe Railway between Chicago, Illinois, and Los Angeles, California. It operated from 1938 to 1971; Amtrak retained the name until 1973. The El Capitan was the only all-coach or "chair car" to operate on the Santa Fe main line between Chicago and Los Angeles on the same fast schedule as the railroad's premier all-Pullman Super Chief. It was also the first train to receive the pioneering Hi-Level equipment with which it would become synonymous.

The California Limited was one of the named passenger trains of the Atchison, Topeka and Santa Fe Railway. It carried train Nos. 3 & 4 and ran between Chicago, Illinois and Los Angeles, California.

The Fodero Dining Car Company (1933–1981) was a diner manufacturer located in Newark and later Bloomfield, New Jersey. It was founded by Italian immigrant Joseph Fodero, who formed the company after constructing diners with P. J. Tierney Sons and Kullman Industries.

The Agawam Diner is a historic diner at 166 Newburyport Turnpike in Rowley, Massachusetts. Manufactured in 1954, it was moved to this location in 1970 after first being located in Ipswich. It is the town's only diner, and one of only six in the state manufactured by the Fodero Dining Car Company. It was listed on the National Register of Historic Places in 1999.

The Deluxe Town Diner is an historic diner in Watertown, Massachusetts. 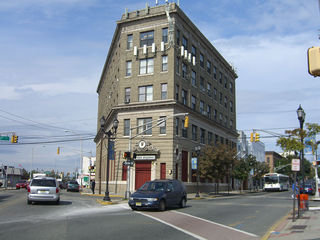 Transfer Station is the name of a section of Hudson County, New Jersey, which radiates from the intersection where Paterson Plank Road crosses Summit Avenue at 7th Street. It is near the tripoint where the borders of Jersey City Heights, North Bergen, and Union City intersect, which is a few blocks to the southwest of the station, at the intersection of Secaucus Road and Kennedy Boulevard.

Worcester Lunch Car Company was a manufacturer of diners based in Worcester, Massachusetts, from 1906 to 1957.

The Empire Diner is a restaurant in New York City that launched a vogue for upscale retro diners, and whose Art Moderne exterior became an iconic image in numerous films and television programs.

The Jerry O'Mahony Diner Company of Elizabeth, New Jersey, was a manufacturer of roadside diners from 1917 to 1952. The company produced some 2,000 of the long, narrow, primarily metal buildings, perhaps more than any other firm. Prefabricated in a factory and trucked to their locations, the diners resemble and are often confused with actual railroad rolling stock. The company's motto was "In our line, we lead the world".

Miss Albany Diner is a historic diner in Albany, New York, built in 1941 and located at 893 Broadway, one of the oldest streets in Albany. Used as a set for the 1987 film Ironweed, which starred Jack Nicholson and Meryl Streep, it was added to the U.S. National Register of Historic Places in 2000.

The city of Allentown, Pennsylvania has been known for its diners since the early 1900s. Many highways were built to accommodate early truck traffic between manufacturing cities to distribution centers, and the concept developed to support truck and long distance travelers along these inter-city roads.

Silk City Diners was a division of the Paterson Wagon Company, later known at Paterson Vehicle Company, established by Everett Abbott Cooper and based in Paterson, New Jersey, which produced about 1,500 diners from 1926 until 1966. Each was tagged with the year and order in which it was built; for example, 5607 would be the seventh diner manufactured in 1956. Several have been listed on the National Register of Historic Places (NRHP).

The soup and sandwich combination meal consists of a soup accompanied by a sandwich. It has been a popular meal in the United States since the 1920s. Some U.S. restaurant chains specialize in the meal, and it has been mass-produced as a prepared frozen meal.

The DeRaffele Manufacturing Company was established in 1933 as Johnson & DeRaffele in New Rochelle, NY. The Company fabricated diners in the old P. J. Tierney plant after the Tierney company had been liquidated in 1933. Later they added banks, restaurants and other modular buildings to their scope of services. DeRaffele is currently the largest manufacturer of diners. It also now specializes in diner renovations.