Tiffany Ann Cole (born December 3, 1981) is an American convicted murderer who was found guilty of the kidnapping and first-degree murder of a Duval County, Florida husband and wife and sentenced to death. Also found guilty in the case were three men: Alan Wade; Bruce Nixon; and Cole's boyfriend, Michael Jackson. Prosecutors said Cole and the three men developed a plan to kidnap and kill the couple to steal their money, and dug a grave for them in Charlton County, Georgia, two days before knocking on their door and asking to use the phone. [1] As of February 2015, Cole is the third youngest woman on death row in the United States; [2] she was 26 at the time of her conviction.

Tiffany Cole was a familiar face to Carol and Reggie Sumner since her family had been neighbors to the 61-year-old couple in South Carolina. When the Sumners moved to Jacksonville, Florida, in March 2005, they sold a car to Cole. Cole agreed to make monthly payments and often drove to Jacksonville with friends.

In June 2005, Cole and her new boyfriend, Michael Jackson, drove to Jacksonville to complete the paperwork on the car. While there, they stayed at the Sumner home. While staying with the couple, Jackson began hatching a plan to rob the couple and steal money from their bank accounts. [3]

In early July 2005, Tiffany Cole, Michael Jackson, and two other men, Alan Wade and Bruce Nixon, drove to the Sumners' home. Wade and Nixon went to the door and asked to use the phone. Once inside, Wade and Nixon attacked. The Sumners were bound and gagged with duct tape, put into the trunk of their Lincoln town car, and driven across the border to a remote part of Georgia. Cole and Jackson traveled separately in their car, planning to get deliberately pulled over for speeding if the police got too close to the Lincoln. Once in Georgia, the Sumners were forced to reveal the personal identification numbers of their bank accounts. The couple, blindfolded and bound, was pushed into a pre-dug grave and buried alive by Wade and Nixon. [4] [5]

Cole subsequently pawned jewelry and other items stolen from the Sumners' home, [6] and the ATM card was used to obtain more than $1000 in cash. Three of the group were tracked back to a hotel in South Carolina by the use of the ATM card and arrested there. After being arrested Nixon willingly led police to the Sumners' grave, revealing that both victims had managed to free themselves of their bonds, but could only manage to hug each other in their final moments before they died.[ citation needed ]

At Cole's week-long trial in October 2007, the jury deliberated for less than 90 minutes before finding her guilty of first-degree murder. [7] They voted 9-3 that she should receive the death penalty. [4] Evidence included photos of Cole and two co-defendants in a limousine, celebrating with champagne and handfuls of cash.

Five months later, a judge handed down two death sentences for the murders, and a sentence of life in prison for the kidnappings. She awaits execution at Lowell Correctional Institution Annex. [8]

Cole is one of three women currently on Florida's death row, the others being Margaret Allen and Tina Brown, each sentenced to death in unrelated murders. [9] [10]

Wade and Jackson also received death sentences. Nixon, who had led police to the bodies and testified against the others, pleaded guilty to second-degree murder and was sentenced to 45 years in prison.

In 2017, the Florida Supreme Court ordered new sentencing hearings for Cole, Wade, and Jackson, because their juries had not unanimously recommended the death penalty. [11] A 2016 U.S Supreme Court ruling, Hurst v. Florida , found that Florida's prior law permitting non-unanimous jury verdicts in death penalty cases violated the Sixth Amendment, [12] prompting Florida to resentence more than 150 convicted felons. [13] [14] In July 2022, Wade was resentenced to life in prison with no chance of parole. Resentencing hearing for Cole won't happen until February 2023.

Due to the brutality and notoriety of the case and the fact that one of the perpetrators was a young woman later sentenced to death, the case has been the subject of several TV documentaries. Including the second season, third episode of Your Worst Nightmare, and an hour-long interview of Tiffany Cole and Emilia Carr with Diane Sawyer for 20/20 in 2015 and Wicked Attraction, "Good Deeds Punished" in 2010.

Furman v. Georgia, 408 U.S. 238 (1972), was a criminal case in which the United States Supreme Court invalidated all death penalty schemes in the United States in a 5–4 decision, with each member of the majority writing a separate opinion. Following Furman, in order to reinstate the death penalty, states had to at least remove arbitrary and discriminatory effects in order to satisfy the Eighth Amendment to the U.S. Constitution.

Capital punishment was a legal penalty in the U.S. state of New Hampshire for persons convicted of capital murder prior to 30 May 2019.

Thomas and Jackie Hawks were a couple from Prescott, Arizona, United States, who were murdered in 2004. In April 2009, Skylar Preciosa Deleon and Jennifer Henderson were convicted of charges relating to their murders. Deleon was sentenced to death while Henderson was sentenced to two terms of life in prison without parole.

The Lords of Chaos was a self-styled teen militia formed on April 13, 1996, in Fort Myers, Florida, United States. It was led by Kevin Donald Foster. The group gained notoriety for a crime spree that ended with the April 30, 1996 murder of one of the boys' teachers, Mark Schwebes, who served as Riverdale High School's band director.

The Canadian Coalition Against the Death Penalty (CCADP) is a not-for-profit organization which was co-founded by Tracy Lamourie and Dave Parkinson of the Greater Toronto Area. The couple formed the CCADP to speak out against the use of capital punishment around the world, to educate and encourage fellow Canadians to resist the occasional calls for a renewal of the death penalty within their own country, and to urge the Canadian government to ensure fair trials and appeals, as well as adequate legal representation, for Canadians convicted of crimes abroad. The CCADP website also quickly evolved into a space where death row inmates and their supporters could post their stories and seek contact with the outside world.

Death row, also known as condemned row, is a place in a prison that houses inmates awaiting execution after being convicted of a capital crime and sentenced to death. The term is also used figuratively to describe the state of awaiting execution, even in places where no special facility or separate unit for condemned inmates exists.

The Brenton Butler case was a murder case in Jacksonville, Florida. During the investigation of a shooting death outside a motel in 2000, police arrested 15-year-old Brenton Butler and charged him with the murder. Butler subsequently confessed to the crime, and the case went to trial. However, during the trial he testified that he had been brutalized into his confession, and he was acquitted. The case gained significant notice in the media, and became the subject of an award-winning documentary, Murder on a Sunday Morning.

Paul Durousseau is an American serial killer who murdered seven young women in the southeastern United States between 1997 and 2003. German authorities suspect he may have killed several local women when he was stationed there with the U.S. Army during the early 1990s. Typically, Durousseau would gain the victim's trust, enter the victim's home, tie their hands, rape, then strangle them to death. All of his known victims were young, single African-American women.

Angela Corey is a former Florida State's Attorney for the Fourth Judicial Circuit Court, which includes Duval, Nassau and Clay counties—including Jacksonville and the core of its metropolitan area. The first woman to hold the position, she was elected in 2008, and defeated on August 30, 2016 by Melissa Nelson, the second ever woman to hold this position. Corey was catapulted into the national spotlight when on March 22, 2012, Florida Governor Rick Scott announced that she would be the newly assigned State Attorney investigating the shooting death of Trayvon Martin.

Capital punishment is a legal penalty in the U.S. state of Florida.

The murders of Byrd and Melanie Billings occurred on or about July 9, 2009, in Pensacola, Florida, United States. Byrd Billings, 66, and his wife, Melanie, 43, were found shot to death on July 9, 2009. The suspects, dressed in "ninja garb," stole a safe and other items during the break-in at the sprawling Billings home west of Pensacola. Nine of their children were home at the time, but were not hurt by the intruders. The family's attorney said that the safe contained jewelry, family papers, and prescription medications.

The Glynn County mass murder was discovered on August 29, 2009, when eight dead bodies were found at the New Hope Mobile Home Park in Glynn County, Georgia, near Brunswick. There were also two people found injured, one of whom later died of injuries. 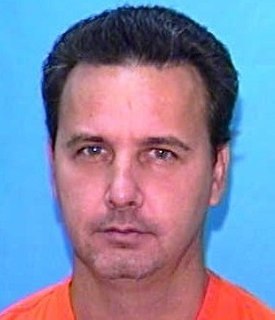 Gary Ray Bowles was an American serial killer who was executed in 2019 for the murders of six men in 1994. He is sometimes referred to as The I-95 Killer since most of his victims lived close to the Interstate 95 highway.

In February 2009, Heather Strong was kidnapped and murdered in Marion County, Florida. Emilia Lily Carr, a rival for the affections of a man Strong had dated, came under suspicion. Carr denied any guilt and alleged her statements were coerced. Carr was nevertheless found guilty in December 2010 and sentenced to death by lethal injection in February 2011. Carr was one of five women on death row in the state of Florida. On May 19, 2017, Emilia Carr was re-sentenced to life without parole. Joshua Fulgham was similarly convicted of first-degree murder and kidnapping in the death. At a separate trial, where he pled guilty, Joshua Fulgham received two consecutive sentences of life in prison for his involvement in Strong's murder.

Walter Leroy Moody Jr. was an American convicted murderer who was sentenced to death and executed in Alabama for the 1989 letter bomb murder of Robert S. Vance, a U.S. federal judge serving on the Court of Appeals for the 11th Circuit.

Emani Gabrielle Moss was a ten-year-old American girl who was starved to death by her stepmother in Lawrenceville, Georgia, in 2013, in what became a prominent case leading to reforms in Georgia's child welfare system. Tiffany Nicole Moss was convicted of murdering Emani in 2019 and was subsequently sentenced to death. The murder received national, as well as international attention. The attention was largely due to the crime's severe nature; Emani was physically abused by Moss for several years prior to her death. In 2013, Moss began starving Emani. Emani's father Eman, who was rarely home, failed to stop the abuse. Emani died of starvation on October 28, 2013. At the time of her death, she weighed 32 pounds, the weight of an average toddler. The murder led to several systemic changes in the Georgia Division of Family and Child Services (GDFCS). Eman pled guilty in 2015 for his role in the crime. The case against Moss went to trial, and in April 2019, Moss, who represented herself, was convicted of all counts. She was sentenced to death on May 1, 2019. She is currently incarcerated at the Arrendale State Prison and is Georgia's only female death row inmate. 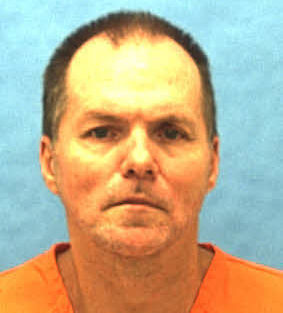 Mark James Asay was an American spree killer who was executed by the state of Florida for the 1987 racially motivated murders of two men in Jacksonville, Florida. He was convicted, sentenced to death, and subsequently executed in 2017 at Florida State Prison by lethal injection. Asay's execution generated attention as it was noted by multiple news agencies that he was the first white person to be executed in Florida for killing a black person. He was also the first person to be executed in the United States using the drug etomidate.