U.S. Route 319 is a spur of U.S. Route 19. It runs for 303 miles (488 km) from the foot of the John Gorrie Memorial Bridge across from downtown Apalachicola, Florida to US 1/SR 4 in Wadley, Georgia, through the Panhandle of Florida and the southern portion of Georgia.

The Plant System named after its owner, Henry B. Plant, was a system of railroads and steamboats in the U.S. South, taken over by the Atlantic Coast Line Railroad in 1902. The original line of the system was the Savannah, Florida and Western Railway, running across southern Georgia. The Plant Investment Company was formed in 1882 to lease and buy other railroads and expand the system. Other major lines incorporated into the system include the Savannah and Charleston Railroad and the Brunswick and Western Railroad.

The Atlantic and Gulf Railroad was chartered in February 1856 by act of the Georgia General Assembly. It was also known as the Main Trunk Railroad. It traversed south Georgia from Screven to Bainbridge, Georgia. Construction began in early January 1859. Its construction was halted by the American Civil War. Construction began again after the end of the war and the line was completed to Bainbridge, Georgia by late December 1867. The route never reached all the way to the Gulf of Mexico as it had originally had intended. The company went bankrupt in 1877 and was bought in 1879 by Henry B. Plant and became incorporated into his Plant System. Its main line is currently operated by CSX Transportation. Throughout its history, the Atlantic and Gulf was closely associated with the Savannah and Albany Railroad Company and its successor the Savannah, Albany, and Gulf Railroad.

The Atlanta, Birmingham and Coast Railroad was organized in 1926 to replace the Atlanta, Birmingham and Atlantic Railway. The AB&C was controlled by the Atlantic Coast Line Railroad, which owned a majority of the stock. In 1944 it reported 763 million net ton-miles of revenue freight and 33 million passenger-miles; at the end of that year it operated 639 miles of road and 836 miles of track.

Originally chartered on October 24, 1887, the Waycross Air Line Railroad began operations between Waycross, GA to Sessoms, GA in 1890. In 1901, the railroad had extended as far as Fitzgerald, GA at which time its charter was amended for an extension to Birmingham, AL and it was renamed the Atlantic and Birmingham Railroad. That company was consolidated with the Tifton and Northeastern Railroad and Tifton, Thomasville and Gulf Railway on December 3, 1903 to form the Atlantic and Birmingham Railway. 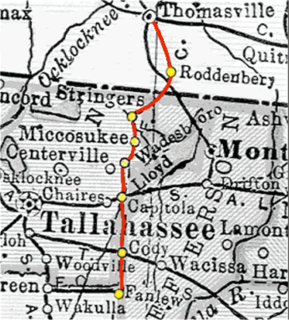 The Florida Central Railroad, headquartered in Thomasville, Georgia, constructed a 47 miles (76 km) line between that city and Fanlew, Florida in 1907 and 1908.

The Winston-Salem Southbound Railway is a 90-mile (140 km) short-line railroad jointly owned by CSX Transportation and the Norfolk Southern Railway (NS), which provide it with equipment. It connects with NS at the north end in Winston-Salem, CSX at the south end in Wadesboro, and in between with NS at Lexington and Whitney, the subsidiary High Point, Thomasville and Denton Railroad at High Rock, and the Aberdeen, Carolina and Western Railway at Norwood. Originally owned jointly by the Atlantic Coast Line Railroad and Norfolk and Western Railway, predecessors to CSX and NS, it was completed in November 1910.

The Union Station built in 1930 in Atlanta was the smaller of two principal train stations in downtown, Terminal Station being the other. It was the third "union station" or "union depot", succeeding the 1853 station, burned in mid-November 1864 when Federal forces left Atlanta for the March to the Sea, and the 1871 station.

The Atlantic and Gulf Railroad was a shortline railroad that previously operated 77 miles (124 km) of track between Thomasville and Sylvester, Georgia, via Albany. The Atlantic & Gulf was created in 1991 from former CSX tracks and currently exists as part of the Georgia & Florida Railway, a subsidiary of OmniTRAX.

The Dothan Subdivision is a railroad line owned and operated by CSX Transportation in the U.S. states of Georgia and Alabama. The line runs from Thomasville, Georgia, to Montgomery, Alabama, for a distance of 211.1 miles (339.7 km).

The Southland was a night train between Chicago, Illinois and different points in western and eastern Florida in the 1915 to 1957. In early years it was called the New Southland. It was distinctive among Midwest to Florida trains as its western branch was the only all-season mid-20th-century long-distance train passing from Georgia to Florida bypassing the usual passenger train hub of Jacksonville Union Station. The main operator was the Louisville and Nashville Railroad, and pooling partners were the Pennsylvania Railroad, the Atlantic Coast Line Railroad and to lesser extent, the Wabash Railroad and the Florida East Coast Railway. For southeast bound -but not northwest bound- trips to Norfolk, Virginia, some coaches in 1946 diverged at Cincinnati along a Norfolk and Western Railroad route. Northwest bound, travelers could switch trains at Cincinnati for heading towards Chicago.