Tiger Aircraft LLC was an American aircraft manufacturer from 1999 to 2006 based in Martinsburg, West Virginia, United States.

The company was established in 1999 with the aim of returning the AG-5B Tiger to production. Tiger Aircraft followed in the footsteps of Grumman American, Gulfstream American and American General Aviation Corporation in manufacturing the Tiger.

Tiger Aircraft ceased operations by November 2006 and filed for bankruptcy in January 2007. [1]

Tiger Aircraft was headed by President and Chief Operating Officer N. Gene Criss between August 25, 2003, and early August 2006. Criss was fired by the board for allegedly selling the assets of the company to Network Hosts without authority. The four companies that owned Tiger Aircraft applied to a West Virginia Circuit Court at that time for a restraining order to prevent further sales and also to declare the previous deals invalid. [2]

By the middle of 2006 Tiger Aircraft was experiencing financial problems, production of AG-5Bs had been halted and production workers had been laid off. [3] By November 2006 the company employed only two workers and owed $115,000 in back taxes to the municipality. [4] On November 30, 2006 it was announced that the Tiger Aircraft buildings were for sale. [5] Tiger Aircraft filed for bankruptcy in January 2007. [1]

In November 2007, True Flight announced plans to construct a new production facility at the local airport of Valdosta, Georgia, and commence production of parts first. [12]

In early 2009, the company decided to move to an existing vacant production facility in Quitman, Georgia, rather than proceed with constructing new facilities at Valdosta. This decision was prompted by the ongoing economic situation, delays imposed by the Federal Aviation Administration (FAA) as part of a runway extension at Valdosta and an attractive offer to relocate from the Quitman municipal government. At Sun 'n Fun 2009 in April the company announced that it expected to start production of AG-5Bs by mid-summer 2009. True Flight exhibited at AirVenture 2009 in July. At Sun 'n Fun in April 2010 the company gave an update on progress, although production had still not commenced at that time. [17] [18] [19]

In July 2012, True Flight Aerospace again exhibited at AirVenture as part of the State of Georgia's Center for Innovation in Aerospace. Production of new aircraft had still not commenced. [20]

As of December 2021, True Flight Aerospace, in spite of more than ten years of promises, had not produced a single aircraft.

The Cessna Aircraft Company was an American general aviation aircraft manufacturing corporation headquartered in Wichita, Kansas. The company produced small, piston-powered aircraft, as well as business jets. For much of the mid-to-late 20th century, Cessna was one of the highest-volume and most diverse producers of general aviation aircraft in the world. It was founded in 1927 and was purchased by General Dynamics in 1985, then by Textron, Inc., in 1992. In March 2014, when Textron purchased the Beechcraft and Hawker Aircraft corporations, Cessna ceased operations as a subsidiary company and joined the others as one of the three distinct brands produced by Textron Aviation.

The Cirrus Design Corporation, doing business as Cirrus Aircraft, is an aircraft manufacturer that was founded in 1984 by Alan and Dale Klapmeier to produce the VK-30 kit aircraft. The company is owned by a subsidiary of the Chinese government-owned AVIC, and is headquartered in Duluth, Minnesota, United States, with additional operational locations in Grand Forks, North Dakota, Knoxville, Tennessee, McKinney, Texas, as well as the greater Phoenix, Arizona and Orlando, Florida metropolitan areas. Cirrus markets several versions of its three certificated single-engine light aircraft models: the SR20, SR22, and SR22T. As of January 2021, the company had delivered 8,000 SR-aircraft in over 20 years of production, and has been the world's largest producer of piston-powered aircraft since 2013. 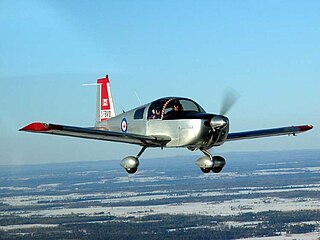 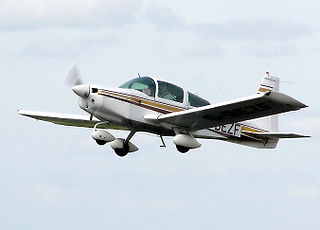 Grob Aircraft is a German aircraft manufacturer, specialising in gliders and general aviation.

GippsAero is an Australian aircraft manufacturer based at Latrobe Valley Airport in Morwell, Victoria. The company builds single-engined utility aircraft. These include the multi-role GA8 Airvan and the agricultural GA200 Fatman. In late 2020, brand owner Mahindra Aerospace announced plans to shut down GippsAero due to poor sales unless a buyer could be found. Its 2021 Board Report indicated that GippsAero Pty Ltd. had been converted into a Spares and Support Organization. 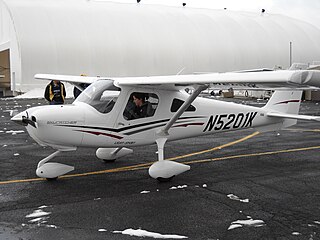 The Cessna 162 Skycatcher is an American side-by-side two-seat, high-wing, strut-braced, tricycle gear light-sport aircraft (LSA) that was designed and produced by Cessna between December 2009 and December 2013. Its intended market was flight training and personal use.

Costruzioni Aeronautiche Tecnam is an Italian aeronautics manufacturer. It was founded in 1986. The company has two primary activities: producing aircraft components for various other manufacturers, and manufacturing its own range of light aircraft. 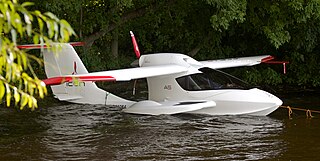 The ICON A5 is an American amphibious light-sport aircraft (LSA) designed and produced by ICON Aircraft. A concept aircraft was first flown in 2008, and creation of the production tooling began in December 2012. The first production aircraft made its first flight on July 7, 2014, and made its public debut at EAA AirVenture Oshkosh on July 27, 2014. A year later at AirVenture, it was temporarily donated to the youth group Young Eagles, with the first official A5 customer deliveries occurring in 2016. As of 2019, 100 A5s had been delivered. The aircraft is known for having brought significant excitement and publicity to the LSA industry since its unveiling in 2008, although company legal and financial issues have slowed production over the last six years.

ICON Aircraft, Inc. is a privately held aircraft manufacturing company headquartered in Vacaville, California, United States. It was founded in 2006 by two Stanford graduates, aviator Kirk Hawkins and product designer Steen Strand, to develop and certify the ICON A5 amphibious light sport aircraft (LSA). The aircraft entered production in 2016. ICON is known for having brought significant excitement and publicity to the LSA industry since the A5's debut in 2008, although legal, financial and developmental issues, as well as a string of early accidents, have slowed company production and growth over the last six years.

Eclipse Aerospace was an American aircraft manufacturer, maintenance and upgrade company. The company provided maintenance and upgrades to the Eclipse 500 fleet and was the manufacturer of the Eclipse 550. The company was formed specifically to purchase the assets of bankrupt Eclipse Aviation, for which it paid US$20 million in cash and US$20 million in promissory notes in August 2009. 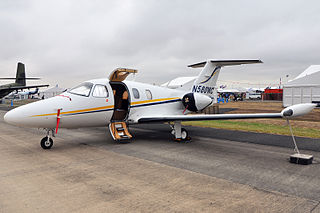 The Eclipse 550 is a very light jet initially built by Eclipse Aerospace and later One Aviation of Albuquerque, New Mexico, United States. The aircraft is a development version of the Eclipse 500, which was produced by predecessor Eclipse Aviation. Like the 500, the 550 is a low-wing, six seat, twin engine jet-powered aircraft. The Eclipse 550 is certified for single-pilot operation.