Tiger Stadium is a 7,000-capacity stadium located in Livingston, Alabama. It is home to the University of West Alabama Tigers football.

Livingston is a city in Sumter County, Alabama, United States. By an act of the state legislature, it was incorporated on January 10, 1835. At the 2010 census the population was 3,485, up from 3,297 in 2000. The city is the county seat of Sumter County, and the home of the University of West Alabama. It was named in honor of Edward Livingston, of the Livingston family of New York.

The University of West Alabama is a public university located in Livingston, Alabama, United States.

The stadium was built in 1952 to fill the need for an on-campus stadium, until 1952 the Tigers played home games at Livingston High School. It is built on a patch of land known as Crawdad Creek.

Sumter County is a county of the U.S. state of Alabama. As of the 2010 census, the population was 13,763. Its county seat is Livingston. Its name is in honor of General Thomas Sumter of South Carolina. 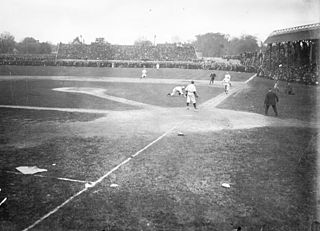 Bennett Park was a ballpark, named after Charlie Bennett, that formerly existed in Detroit, Michigan, at Michigan and Trumbull. It was home to the Detroit Tigers. The ballclub began play here in the minor Western League with a 17–2 win over the Columbus Senators on April 28, 1896. That league was renamed the American League in 1900 but was still officially a minor league. The AL declared itself a major league starting in 1901. 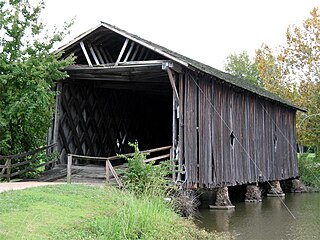 The Alamuchee-Bellamy Covered Bridge is a county-owned wooden covered bridge that spans the northeast corner of Duck Pond in Sumter County, Alabama, United States. It is located on the campus of the University of West Alabama behind Reed Hall, which is off Student Union Drive in the city of Livingston. 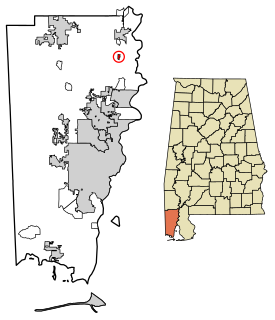 Bucks is an unincorporated community and census-designated place in Mobile County, Alabama, United States. As of the 2010 census, its population was 32. It is located in the northeastern section of the county near the Mobile River, along U.S. Route 43. The James M. Barry Electric Generating Plant, a coal- and natural gas-fired power station operated by Alabama Power, is located in Bucks.

Stillman Stadium is a stadium in Tuscaloosa, Alabama. It is primarily used for American football, and is the home field of Stillman Tigers football.

The Auburn Softball Complex is a softball complex in Auburn, Alabama. The facility is the home field of the Auburn High School Tigers softball program, and served as the home field of the Auburn University Tigers softball team in 1997 and 1998. The five–field complex has been rated one of the premier complexes in the United States by USA Softball magazine and has hosted 18 Amateur Softball Association (ASA) national championship tournaments and 11 Independent Softball Association (ISA) national championships. In 1999, the facility was named the ISA National Complex of the Year. 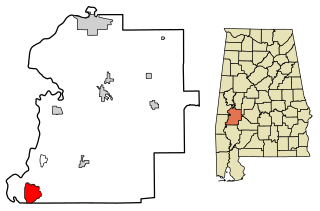 Putnam is an unincorporated community and census-designated place in Marengo County, Alabama, United States. As of the 2010 census, its population was 193.

The West Alabama Tigers football program is the intercollegiate American football team for the University of West Alabama located in the U.S. state of Alabama. The team competes in the NCAA Division II and are members of the Gulf South Conference. West Alabama's first football team was fielded in 1938. The team plays its home games at the 7,000 seat Tiger Stadium in Livingston, Alabama. The Tigers are coached by Brett Gilliland.

Fifth Third Bank Stadium is primarily used as the home for the Kennesaw State Owls men's football team. It was originally a soccer-specific stadium near Kennesaw, Georgia that opened on May 2, 2010, with the first match played on May 9. It was primarily used for soccer, and hosts lacrosse and rugby games. The facility is the result of a public-private partnership between Kennesaw State University and the now-defunct Atlanta Beat of Women's Professional Soccer. The facility hosts the KSU women's soccer team; previously, it hosted the Beat, and hosted the 2010 WPS All-Star Game on June 30. Pro soccer returned when Atlanta United 2 of the USL Championship moved to the stadium for the 2019 season. The stadium hosted a 2019 CONCACAF Champions League match, where Atlanta United played against Herediano on February 28, 2019 and won 4-0.

The Alabama Soccer Stadium was built in 2004. The complex features covered bench areas for both teams and a press box with seating for 1,500 spectators and standing room for many more. The University of Alabama soccer field was the first home of Alabama soccer and it saw its first action on Oct. 2, 1994, as Alabama played Furman University. The Tide has compiled a 109-56-11 overall record on campus and a 36-29-4 ledger since playing at the Alabama Soccer Complex.

Alumni Stadium is a multi-purpose stadium at the University of Guelph in Guelph, Ontario, Canada. It is home to the Guelph Gryphons varsity football team. It was built in 1970, and has a fixed seating capacity of approximately 8,500, including fixed seating and the grass hill on the east side of the stadium. On October 27, 2011, it was announced that the stadium would undergo an $18 million expansion and renovation that will bring fixed seating capacity up to 7,500. It was also announced that an eight-lane track would be installed as well as synthetic turf for the field.

The 1965 Auburn Tigers football team represented Auburn University in the 1965 college football season. It was the Tigers' 74th overall and 32nd season as a member of the Southeastern Conference (SEC). The team was led by head coach Ralph "Shug" Jordan, in his 15th year, and played their home games at Cliff Hare Stadium in Auburn and Legion Field in Birmingham, Alabama. They finished with a record of five wins, five losses and one tie and with a loss against Ole Miss in the Liberty Bowl.

The 1952 Auburn Tigers football team represented Auburn University in the 1952 college football season. It was the Tigers' 61st overall and 20th season as a member of the Southeastern Conference (SEC). The team was led by head coach Ralph "Shug" Jordan, in his second year, and played their home games at Cliff Hare Stadium in Auburn, Legion Field in Birmingham and Ladd Memorial Stadium in Mobile, Alabama. They finished with a record of two wins and eight losses. 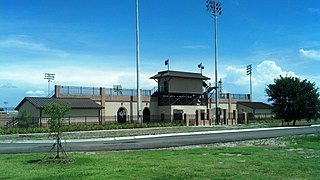 The LSU Soccer Stadium is a soccer facility located on the campus of Louisiana State University in Baton Rouge, United States. The facility was built in 1996. It serves as the home of the LSU Tigers women's soccer team. The two-level stadium has a seating capacity of 2,197.

Sumter Central High School is a senior high school in unincorporated Sumter County, Alabama, between Livingston and York. It has 85,000 square feet (7,900 m2) of space. It is a part of the Sumter County School District.