Growing up in Eskilstuna it was only natural for him to play for the towns handball team, GUIF, and he was moved up to their senior squad, making his debut in the Swedish top division at the age of 15. In 1988, at the age of 20, he made his first cap for Sweden and in 1990 he was one of the main forces in the national team who won the World Championship in Czechoslovakia. This success landed him a contract with Atlético Madrid BM in Spain where he played for some time before moving to CD Bidasoa. With this team he won his first Spanish championship in 1995. Right after this he moved to Barcelona where he stayed for several seasons, helping the team become the most prominent handball team in the world, winning just about everything there is to win – including international competitions like EHF Champions League and EHF Men's Champions Trophy as well as Spanish competitions like Liga ASOBAL and Copa del Rey de Balonmano. Svensson moved to Germany and HSV Hamburg for a short while before returning to Spain, this time to play for Portland San Antonio. On 8 May 2012, Svensson officially announced his retirement as a player.

In 1991, Svensson, along with his then girlfriend, survived the Scandinavian Airlines Flight 751 plane crash in Gottröra, Sweden. [2] [3]

Svensson settled in Spain after moving to Barcelona, and married a Spanish woman. His son, Max Svensson, is a professional footballer. [4]

Ólafur Indriði Stefánsson is a former Icelandic handball player who, for many years was the captain of the Iceland men's national handball team but announced his international retirement after the 2012 London Olympics. His position was right back. At his peak he was considered to be one of the very best handball players in the world.

Guðmundur Þórður Guðmundsson is an Icelandic retired handball player and current coach of the Icelandic national team. In 2016, he guided Denmark men's team to gold in the 2016 Olympics. In 2008, he won silver with the Icelandic men's national team at the 2008 Olympic games in China.

Raúl González Gutiérrez is a Spanish retired handball player who competed in the 1996 Summer Olympics and current coach of Paris Saint-Germain.

Rhein-Neckar Löwen is a professional handball club founded in 2002, based in Mannheim, Germany. The club competes in the German Handball-Bundesliga and continentally in EHF Champions League. Rhein-Neckar Löwen play their home games in SAP Arena, with a seating capacity of 14,500.

This is a list of the 2010 European Men's Handball Championship squads. Each team had until 15 December 2009 to register 28 players. Of these 28 players, the national associations must choose 16 players at least one day before the tournament. After this a maximum of two players can be replaced with a player from the original 28. After the main round has started, yet another player can be replaced.

Borko Ristovski is a Macedonian handball for RK Vardar 1961 and the North Macedonia national team.

Uwe Gensheimer is a German handball player for Rhein-Neckar Löwen and the German national team.

Nikola Manojlović is a Serbian handballer who plays for German Handball-Bundesliga team Rhein-Neckar Löwen and the Serbian national team. 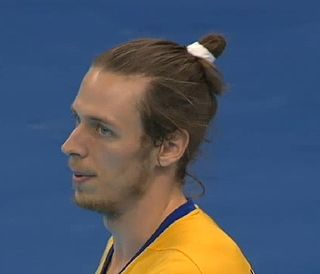 Jakov Gojun is a Croatian handball player for Füchse Berlin.

The following are the handball events of the year 2012 throughout the world. Tournaments include international, professional (club), youth and amateur levels.

This page details statistics of the European Cup and Champions League.

Petar Nenadić is a Serbian handball player who plays for Telekom Veszprém and the Serbian national team.

Andreas Miroslav Palicka is a Swedish handball player for Rhein-Neckar Löwen and the Swedish national team.