Sir Tomasi Puapua GCMG KBE PC (born 10 September 1938) [1] is a political figure who represented Vaitupu in the Parliament of Tuvalu. He attended the Fiji School of Medicine and the Otago University Medical School. He married Riana Puapua.

He was the second Prime Minister of Tuvalu from 8 September 1981 to 16 October 1989. In a country which sees frequent changes among its head of government, Puapua is noted for having been the hitherto longest serving Prime Minister.

The first elections after independence will not held until 8 September 1981. 26 candidates contested the 12 seats. Dr. Tomasi Puapua, was elected as prime minister with a 7:5 majority over the group a members of parliament headed by former Prime Minister Toaripi Lauti. [2] Tomasi Puapua was re-elected in the general election held on 12 September 1985 continued as Prime Minister, [3]

The next general election was held on 26 March 1989. In the subsequent parliament the members elected Bikenibeu Paeniu. [4]

Following the general election that was held on 25 November 1993 the members of parliament were evenly split in their support of the incumbent Prime Minister Bikenibeu Paeniu and Tomasi Puapua. [5] As a consequence, the Governor-General dissolved the parliament on 22 September and a further election took place on 25 November 1993. The subsequent parliament elected Kamuta Latasi as prime minister on 10 December 1993. [5]

He was elected Speaker of the Parliament of Tuvalu (Palamene o Tuvalu) during government of Kamuta Latasi from 1993 to 1998. [6]

Having exercised the senior executive office for many years, Puapua later served as Governor-General of Tuvalu as the representative of Elizabeth II, Queen of Tuvalu from 1998 to 2003, [7] which is a higher office in protocol terms, but is more ceremonial in nature.

In 1998 he was made a Knight Commander of the Most Excellent Order of the British Empire (KBE) for services to medicine, politics and the community. [8]

in 2002 Dr Puapua was later appointed to the Order of St Michael and St George and the Privy council.

The politics of Tuvalu takes place in a framework of a parliamentary representative democratic monarchy, whereby the Monarch is the head of state, represented by the Governor-General, while the Prime Minister is the head of government. Executive power is exercised by the government.

Sir Toaripi Lauti was a Tuvaluan politician who served as chief minister of the Colony of Tuvalu (1975–78), as the first prime minister following Tuvalu's independence (1978–1981) and governor-general of Tuvalu (1990–1993). He was married to Sualua Tui.

Tuvalu elects a legislature on a national level. The Parliament of Tuvalu has 15 members, elected for a four-year term in 7 double- and 1 single-seat constituencies. Tuvalu is a de facto non-partisan democracy since it does not have political parties.

Bikenibeu Paeniu, PC is a politician from Tuvalu. He represented the constituency of Nukulaelae in the Parliament of Tuvalu. He has served twice as the Prime Minister of Tuvalu. 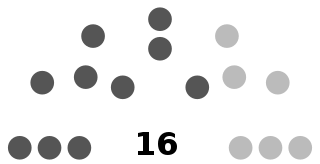 The Parliament of Tuvalu is the unicameral national legislature of Tuvalu. 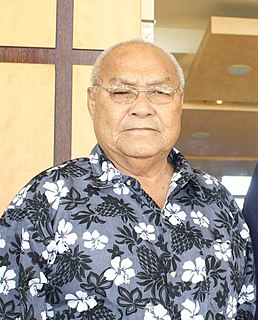 Apisai Ielemia was a Tuvaluan politician. He served as the tenth Prime Minister of Tuvalu from 2006 to 2010, and was returned as a member of parliament in the 2010 Tuvaluan general election. He was re-elected to parliament in the 2015 Tuvaluan general election. On 5 October 2016 Chief Justice Sweeney of the High Court of Tuvalu declared that Ielemia’s parliamentary seat was vacant as he was not qualified to be a member of parliament, as the consequence of the short time the opposition MP served time in jail following his conviction on 6 May 2016 in the Magistrate’s Court of charges of abuse of office during the final year of his term as Prime Minister. The abuse of office charges related to payments deposited into a National Bank of Tuvalu personal account. The 5 October 2016 decision of the Chief Justice was controversial as it appeared to contradict the June 2016 decision of Justice Norman Franzi of the High Court of Tuvalu that had quashed Ielemia’s conviction and acquitted him of the abuse of office charges. The appeal to the High Court held that the conviction was “manifestly unsafe,” with the court quashing the 12-month jail term.

Naama Maheu Latasi, Lady Latasi, OBE was a political figure from the Pacific nation of Tuvalu. She stood for election in the constituency of Nanumea in 1989 and was elected to the Parliament of Tuvalu. Lady Latasi served as Minister of Health, Education and Community Services in the first Government of Prime Minister of Tuvalu Bikenibeu Paeniu. She was the first female member of parliament in Tuvaluan history. An amazing feat, that served to both pave the way for other aspiring female members of parliament today, but propelled the movement of gender equality. She served in Parliament from 1989 to 1997.

The Cabinet of Tuvalu is the executive branch of the government of Tuvalu.

General elections were held in Tuvalu on 8 September 1981.

General elections were held in Tuvalu on 12 September 1985. As there were no political parties, all candidates for the 12 seats ran as independents, with nine of the incumbents retaining their seats. Tomasi Puapua was re-elected Prime Minister following the elections.

General elections were held in Tuvalu on 27 September 1989. Bikenibeu Paeniu was elected Prime Minister following the elections and formed a five-member cabinet composed largely of opponents of the previous Prime Minister Tomasi Puapua.

General elections were held in Tuvalu on 2 September 1993. As there were no political parties, all candidates for the 12 seats ran as independents. Following the election, supporters of Prime Minister Bikenibeu Paeniu held six seats, whilst supporter of the previous Prime Minister, Tomasi Puapua, held the other six. In order to break the impasse, the Governor-General dissolved Parliament on 22 September and fresh elections were held in November.

Early general elections were held in Tuvalu on 25 November 1993, after the previous election in September had resulted in a deadlock in Parliament, with supporters of incumbent and former Prime Ministers Bikenibeu Paeniu and Tomasi Puapua holding an equal number of seats.

General elections were held in Tuvalu on 26 March 1998. As there were no political parties, all candidates for the 12 seats ran as independents, with seven of the incumbents retaining their seats. Following the election, Bikenibeu Paeniu was re-elected Prime Minister.

Otinielu Tauteleimalae Tausi is a politician from Tuvalu for the constituency of Nanumanga. He served as the speaker of the Parliament of Tuvalu from 2003 until 2006, then again from March 2014 onward, and has also been the deputy prime minister of Tuvalu.

The Ielemia Ministry was the 11th ministry of the Government of Tuvalu, led by Prime Minister Apisai Ielemia. It succeeded the First Toafa Ministry following the 2006 election, but was voted out of office after the 2010 election and was succeeded by the Second Toafa Ministry, led by Maatia Toafa.

Henry Faati Naisali, CMG, AO, OBE was a Tuvaluan politician who served as Deputy Prime Minister of Tuvalu (1985-1989), Secretary General of the Pacific Islands Forum (1988-1992) and Pro-Chancellor of The University of the South Pacific (1985-1990). He is notable for co-founding the Tuvalu Trust Fund which lead Tuvalu to achieve greater financial autonomy.