Tommaso Toffoli (Italian pronunciation:  [tomˈmaːzo ˈtɔffoli] ) is an Italian-American professor of electrical and computer engineering at Boston University where he joined the faculty in 1995. [1] [ dead link ] He has worked on cellular automata and the theory of artificial life (with Edward Fredkin and others), and is known for the invention of the Toffoli gate.

He was born in June, 1943 in Montereale Valcellina, in northeastern Italy, to Francesco and Valentina (Saveri) Toffoli and was raised in Rome. He received his laurea in physics (equivalent to a Master's degree) from the University of Rome La Sapienza in 1967.[ citation needed ]

Toffoli came to the United States in 1969.[ citation needed ]

Systems Concepts is a company co-founded by Stewart Nelson and Mike Levitt focused on making hardware products related to the DEC PDP-10 series of computers. One of its major products was the SA-10, an interface which allowed PDP-10s to be connected to disk and tape drives designed for use with the channel interfaces of IBM mainframes.

In logic circuits, the Toffoli gate, invented by Tommaso Toffoli, is a universal reversible logic gate, which means that any reversible circuit can be constructed from Toffoli gates. It is also known as the "controlled-controlled-not" gate, which describes its action. It has 3-bit inputs and outputs; if the first two bits are both set to 1, it inverts the third bit, otherwise all bits stay the same.

Edward Fredkin is a distinguished career professor at Carnegie Mellon University (CMU), and an early pioneer of digital physics.

A cellular automaton (CA) is Life-like if it meets the following criteria: 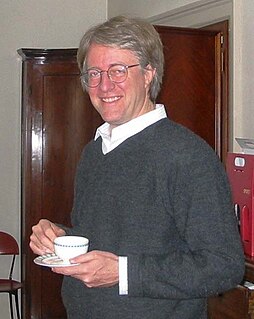 Norman Harry Packard is a chaos theory physicist and one of the founders of the Prediction Company and ProtoLife. He is an alumnus of Reed College and the University of California, Santa Cruz. Packard is known for his contributions to both chaos theory and cellular automata. He also coined the phrase "the edge of chaos".

A billiard-ball computer, a type of conservative logic circuit, is an idealized model of a reversible mechanical computer based on Newtonian dynamics, proposed in 1982 by Edward Fredkin and Tommaso Toffoli. Instead of using electronic signals like a conventional computer, it relies on the motion of spherical billiard balls in a friction-free environment made of buffers against which the balls bounce perfectly. It was devised to investigate the relation between computation and reversible processes in physics.

The idea of human artifacts being given life has fascinated humankind for as long as people have been recording their myths and stories. Whether Pygmalion or Frankenstein, humanity has been fascinated with the idea of artificial life.

Paul Douglas ("Doug") Tougaw, born July 3, 1969, is a full professor in and chair of the Department of Electrical and Computer Engineering at Valparaiso University. He received his B.S. in Electrical Engineering from the Rose-Hulmann Institute of Technology and his M.S. and Ph.D. in Electrical Engineering from the University of Notre Dame in 1995. In 2005, Tougaw earned an MBA from Valparaiso University's College of Business Administration. His main area of research interest is in the field of Quantum Cellular Automata (QCA). He was awarded the "Best Regional Paper" award at the 2007 Conference of the American Society of Engineering Educators. He was also runner-up for the USA National IEEE Young Engineer award.

Leon Ong Chua is an American electrical engineer and computer scientist. He is a professor in the electrical engineering and computer sciences department at the University of California, Berkeley, which he joined in 1971. He has contributed to nonlinear circuit theory and cellular neural network (CNN) theory. He is also the inventor and namesake of Chua's circuit one of the first and most widely known circuits to exhibit chaotic behavior, and was the first to conceive the theories behind, and postulate the existence of, the memristor. Thirty-seven years after he predicted its existence, a working solid-state memristor was created by a team led by R. Stanley Williams at Hewlett Packard.

Pierre Baldi is a distinguished professor of computer science at University of California Irvine and the director of its Institute for Genomics and Bioinformatics.

Andrzej Nowak is a Polish psychologist, one of the founders of dynamical social psychology. He is a pioneer in applying computer simulations in social sciences.

Critters is a reversible block cellular automaton with similar dynamics to Conway's Game of Life, first described by Tommaso Toffoli and Norman Margolus in 1987.

Toffoli is an Italian surname. Notable people with the surname include: