Archer started his racing career in ice racing, running Porsches borrowed from his father's car dealership. [1] He later attempted the SCCA Runoffs, finishing second in 1980. [2] Along with his brother Bobby, Archer won an IMSA championship in 1984. [2] The duo also ran road races with Porsche Le Car entries throughout the 1980s. [3] In 1986, they won the SCCA drivers' championship. [4] Late in the 1980s, Archer also drove Jeeps in the SCCA truck series. [5] In 1987, Archer qualified fastest in the GTO class of the 24 Hours of Daytona. [6] From 1989 to 1996, the brothers won an additional eight SCCA championships. [2]

Archer is a prostate cancer survivor. [12] He is also a Coldwell Banker-affiliated real estate agent. [13] He and his brother formerly operated an auto parts store in Duluth, Minnesota. [14]

The International Motor Sports Association (IMSA) is a North American various auto racing sanctioning body based in Daytona Beach, Florida under the jurisdiction of the ACCUS arm of the FIA. It was started by John Bishop, a former executive director of SCCA, and his wife Peggy in 1969 with help from Bill France, Sr. of NASCAR. Beginning in 2014, IMSA is the sanctioning body of the WeatherTech SportsCar Championship, the premier series resulting from the merger of Grand-Am Road Racing and the American Le Mans Series presented by Tequila Patrón. IMSA is owned by NASCAR, as a division of the company.

George Follmer is an American former auto racing driver, and one of the most successful road racers of the 1970s. He was born in Phoenix, Arizona. His family moved to California when he was just an infant.

Mark Neary Donohue Jr., nicknamed "Captain Nice," and later "Dark Monohue," was an American racecar driver and engineer known for his ability to set up his own race car as well as driving it to victories.

Road Atlanta is a 2.54-mile (4.088 km) road course located just north of Braselton, Georgia, United States. The facility is utilized for a wide variety of events, including professional and amateur sports car and motorcycle races, racing and driving schools, corporate programs and testing for motorsports teams. The track has 12 turns, including the famous "esses" between turns three and five; and Turn 12, a downhill, diving turn. The track is owned by IMSA Holdings, LLC through its subsidiary Road Atlanta, LLC, and is the home to the Petit Le Mans, as well as AMA motorcycle racing, and smaller events throughout the year. Michelin acquired naming rights to the facility in 2018. 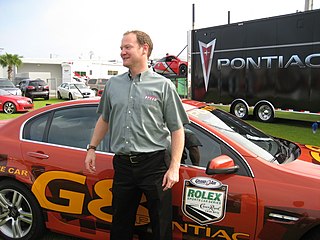 Tommy Kendall is an American race car driver and television broadcaster. He is best known for his IMSA GT Championship and SCCA Trans-Am Series career.

Michael John Borkowski is an American race car driver. Borkowski has raced in a variety of cars and series, is experienced in both road and oval racing, but is best known for his victory over Tommy Kendall in the 1997 Trans-Am Series race at Pikes Peak International Raceway, ending Kendall's historic run of 11 consecutive race wins. Borkowski also went on to win the final race of the 1997 Trans-Am Series at the Reno Grand Prix. 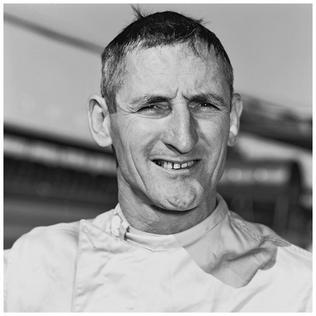 Kenneth Henry Miles was a British sports car racing engineer and driver best known for his motorsport career in the US and with American teams on the international scene. He is an inductee to the Motorsports Hall of Fame of America.

Tony Adamowicz was an American racing driver, active from 1963 until his death. He won the Under 2-Liter class of the 1968 Trans-Am Championship and the 1969 SCCA Continental Championship.

John Morton is an American racing driver from Waukegan, Illinois. After his father took him to a race at Road America in 1957, Morton became an avid racing fan. He went on to race jalopies in South Carolina before he dropped out of Clemson University to attend Carroll Shelby's racing school at Riverside Raceway in California. Taking a menial job working in Carroll Shelby's race shop, Morton saved his money to purchase his first race car, a Lotus Super 7 which he raced in SCCA amateur races in 1963.

Horst Kwech was an Australian race car driver, race car constructor, engineer and inventor known primarily for his several wins in the early Trans-Am Series races of the 1960s and the beginning of the 1970s. 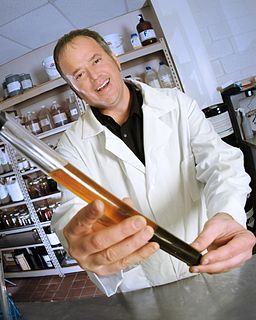 Claudio Burtin is an American entrepreneur, chemist, and race car driver. He is the founder of LINE-X truck bed liners and is credited with the original formulations trademarking LINE-X. Claudio was born in Argentina and moved to the USA in the summer of 1963. He attended Our Lady of the Valley Catholic elementary school located in the Los Angeles school district in southern California. He began working for his father at Chemetics Systems Inc. in Compton, CA at the age of fifteen while attending Servite High School in Anaheim. He apprenticed polyurethane chemistry from his father Carlos Burtin, a licensed chemist.