Tommy Douglas Collegiate Institute is a high school located in the Blairmore Suburban Centre district of western Saskatoon, Saskatchewan, serving students from grades 9 through 12. It is named for Tommy Douglas, the "Father of Canadian Medicare," leader of the Saskatchewan Co-operative Commonwealth Federation and premier of Saskatchewan from 1944 to 1961. The school is unique among Saskatoon public schools in that it is the first to be physically connected to both a regional recreation complex (Shaw Centre) and to a Catholic/separate school (Bethlehem Catholic High School).

50-metre pool, fully equipped gym and various other facilities are available in both the school itself and the adjacent Shaw Centre.

Martensville is a city located in Saskatchewan, Canada, just 8 kilometres (5.0 mi) north of Saskatoon, and 14 kilometres (8.7 mi) southwest of Clarkboro Ferry which crosses the South Saskatchewan River. It is a bedroom community of Saskatoon. It is surrounded by the Rural Municipality of Corman Park No. 344. The community is served by the Saskatoon/Richter Field Aerodrome located immediately west of the city across Highway 12.

Saskatchewan Highway 7 is a major paved undivided provincial highway in the Canadian province of Saskatchewan, running from the Alberta border to Saskatoon. Highway 7 continues west into Alberta where it becomes Alberta Highway 9.

Confederation Suburban Development Area (SDA) is an area in Saskatoon, Saskatchewan (Canada). It is a part of the west side community of Saskatoon. It lies (generally) north of the outskirts of the City and the Rural Municipality of Corman Park No. 344, west of downtown Saskatoon, and the Core Neighbourhoods SDA, south of the North West Industrial SDA, and east of the new Blairmore SDA. 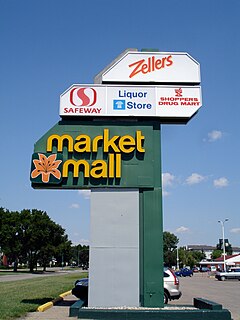 Nutana Suburban Centre is a mixed-development neighbourhood located in south-central Saskatoon, Saskatchewan, Canada. It is a classified as a "suburban centre" subdivision, composed of medium to high-density multiple-unit dwellings, commercial areas and civic facilities. As of 2009, the area is home to 2,962 residents. Housing in the neighbourhood consists of high-density apartment-style dwellings and row houses. The neighbourhood is considered a lower-income area, with an average family income of $34,474, an average dwelling value of $266,311 and a home ownership rate of 29.3%. The low average income but comparatively high dwelling value is due to the number of senior citizens residing in the neighbourhood. The age distribution of Nutana SC's population is skewed very highly toward residents age 65 and older. According to MLS data, the average sale price of a home as of 2013 was $296,114.

Pleasant Hill is a neighbourhood of Saskatoon, Saskatchewan, Canada. The Governments are undertaking a major re-vitalization project of Pleasant Hill. $3.5 million is being invested in the business, and residential areas as well as in St. Mary's School. Together the Saskatoon Urban Renewal Project, the provincial government and the Western Economic Diversification project of the federal Government will result in neighbourhood overhauls. 29 lots zoned for business along 20th Street will be levelled and modern commercial upgrades put into place. Selected lots along Avenue N and Avenue O zoned as residential will be demolished to make way for affordable and decent homes. St. Mary's School will receive major renovations or replacement, possibly even a new community centre.

Massey Place, is a geographically localised subdivision of the Confederation Suburban Development Area in the city of Saskatoon, Saskatchewan which is nestled around Archibald McDonald Park. Mcdonald Park is centrally located along the northern perimeter of 33rd Street East. The school yards of both Vincent Massey School and Bishop Klein School have their western boundaries along Archibald McDonald Park which has as its resources ball diamonds, soccer pitches, winter ice rinks, and playground facilities. Massey Place neighbourhood is close to amenities provided by both the commercial district of the Confederation Suburban Centre.

Lawson Heights is a residential neighbourhood located in northern Saskatoon, Saskatchewan, which was developed beginning in the late 1970s.

Fairhaven is a neighbourhood in Saskatoon, Saskatchewan, Canada. It is close to both Catholic and public elementary schools. A strip mall is within the Fairhaven subdivision. The Confederation Suburban Centre is to the north. According to MLS data, the average sale price of a home as of 2013 was $248,908. 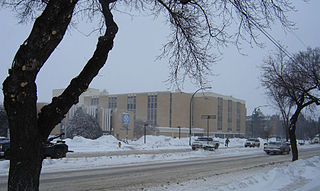 Central Industrial is a light industrial area in Saskatoon, Saskatchewan, Canada, that comprises educational, recreational facilities, hotels and businesses along Idylwyld Drive. The community meets up with the Central Business District CBD to the west and south, and residential areas east and north.

Blairmore Suburban Development Area (SDA) is an area in Saskatoon, Saskatchewan (Canada). It is a part of the west side community of Saskatoon. It lies (generally) north of the outskirts of the City and the Rural Municipality of Corman Park No. 344, west of downtown Saskatoon, and the Core Neighbourhoods SDA, south of the North West Industrial SDA, and west of the Confederation SDA. Most of the Blairmore SDA consists of undeveloped land annexed by the city in the mid-2000s. A total of nine neighbourhoods, primarily residential in nature, are ultimately planned for the SDA. As of late 2019, two are in the process of development: the commercial/residential Blairmore Suburban Centre and the residential community Kensington. A third residential area, Elk Point, is also in its early stages. 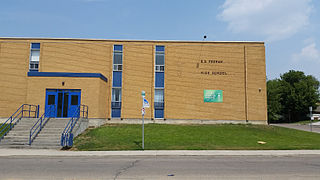 Bethlehem Catholic High School is a separate (Catholic) high school in Saskatoon, Saskatchewan, Canada, that opened in August 2007. It is located off 22nd Street West in the Blairmore Suburban Centre neighbourhood. 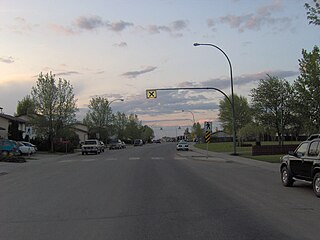 Dundonald is a neighbourhood located in the northwest corner of Saskatoon, Saskatchewan. The neighbourhood was built in the 1980s, and served as the last development of the northwest corner of the city, prior to the development of Hampton Village. Dundonald is surrounded by a large landscaped park, with a storm pond. In comparison, the neighbourhood of Dundonald with a 2001 census population of 5,285 is larger than the Saskatchewan city of Melville which had a population of 4,149 in 2006, and 4,453 in 2001 and Dundonald is also larger than the provincial city of Humboldt which was 4,998 in 2006, and 5,161 in 2001. In Saskatchewan rural towns must maintain a population above 5,000 to apply for city status. According to MLS data, the average sale price of a home as of 2013 was $298,832.

Pacific Heights is geographically located in north west Saskatoon. The main construction boom for this community was the 1970s, during which the City of Saskatoon annexed the land. Following elementary school, students usually attend Tommy Douglas Collegiate or Bethlehem Catholic High School on Bowlt Crescent a part of Blairmore SDA community. According to MLS data, the average sale price of a home as of 2013 was $279,500. 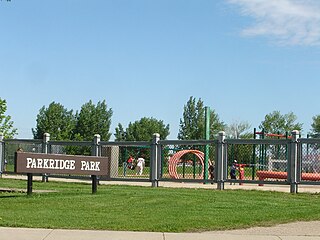 Parkridge is a residential community in western Saskatoon, Saskatchewan, located on land annexed by the city between 1975 and 1979. Development of the subdivision, began in the early 1980s. The extreme west end of the neighbourhood remained undeveloped until the subsequent creation of the adjacent Blairmore Suburban Centre led to the final phase of Parkridge being built out in the early 2010s. Whereas the majority of residents are employed in the sales and service sector, the next highest employer is business, finance and administration. The two main age groups are those in their 40s and teenagers as of 2005. Until recently Parkridge was the farthest western neighbourhood of Saskatoon south of 22nd Street. However, new construction will soon see Neighbourhood 2 of the Blairmore SDA bear that claim to fame. In comparison, the neighbourhood of Parkridge with a 2001 census population of 4,505 is larger than the Saskatchewan city of Melville which had a population of 4,149 in 2006, and 4,453 in 2001 and Parkridge is a little smaller than the provincial city of Humboldt which was 4,998 in 2006, and 5,161 in 2001. In Saskatchewan rural towns must maintain a population above 5,000 to apply for city status. According to MLS data, the average sale price of a home as of 2013 was $327,072.

Mount Royal is a neighbourhood on the westside of Saskatoon, Saskatchewan in the Confederation SDA. Having a population of 4.259 residents, the neighbourhood consists of 3 elementary schools and 2 sister secondary schools.

Kensington is a neighbourhood located in west Saskatoon, Saskatchewan, Canada that began construction in 2013. Around 2028, Kensington will reach completion and have an estimated population of 8,300. Kensington will feature Saskatoon's first application of the fused grid street network.