Gwaltney studied under Ernie Caceres and Peanuts Hucko, playing clarinet in college bands and while serving in the military. Due to lung injuries during World War II, he put down the clarinet and played vibraphone in the 1940s. [1] From 1946 to 1947 he studied at New York University and played in an ensemble with Charlie Byrd and Sol Yaged. Between 1951 and 1955 he seldom played, concentrating on helping a family business in Norfolk, Virginia. In 1956 he joined Bobby Hackett, playing on his album Gotham Jazz Scene in 1957. He then worked with Wild Bill Davison, Billy Butterfield (1958–59), Buck Clayton (1960), Charlie Byrd again (1962–63), and with his own ensembles.

He stopped playing vibraphone in the 1970s but continued on clarinet in the 1980s and 1990s. In 1986 he recorded a tribute album for Pee Wee Russell and gave a concert at the Smithsonian Institution honoring Jimmie Noone. He worked in the Chesapeake Bay Jazz Band beginning in 1992.

Robert Leo Hackett was an American jazz musician who played trumpet, cornet, and guitar with the bands of Glenn Miller and Benny Goodman in the late 1930s and early 1940s. Hackett was a featured soloist on some of the Jackie Gleason mood music albums during the 1950s. 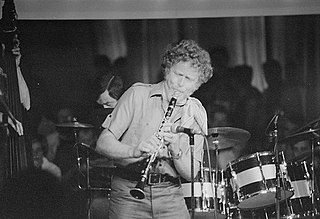 Robert Sage Wilber was an American jazz clarinetist, saxophonist, and band leader. Although his scope covers a wide range of jazz, Wilber was a dedicated advocate of classic styles, working throughout his career to present traditional jazz pieces in a contemporary manner. He played with many distinguished jazz leaders in the 1950s and 1960s, including Bobby Hackett, Benny Goodman, Sidney Bechet, Jack Teagarden and Eddie Condon. In the late 1960s, he was an original member of the World's Greatest Jazz Band, and in the early 70s of Soprano Summit, a band which gained wide attention. In the late 1970s, he formed the Bechet Legacy Band.

Johnny Varro is a pianist with roots in the swing style of jazz. He is also a leader and arranger. 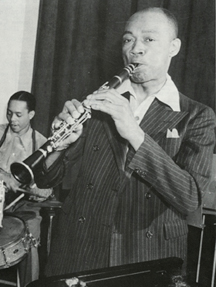 Edmond Hall was an American jazz clarinetist and bandleader. Over his long career Hall worked extensively with many top performers as both a sideman and bandleader and is perhaps best known for the 1941 chamber jazz song "Profoundly Blue," which is regarded as a pre-World War II jazz classic.

Ernesto Caceres was an American jazz saxophonist born in Rockport, Texas. He was a member of the Glenn Miller Orchestra from 1940–1942.

William Frank Reichenbach Sr. was an American jazz drummer and percussionist, who co-developed the jazz-samba drumming style. He was the father of trombonist Bill Reichenbach Jr. and the singer Kurt Reichenbach. 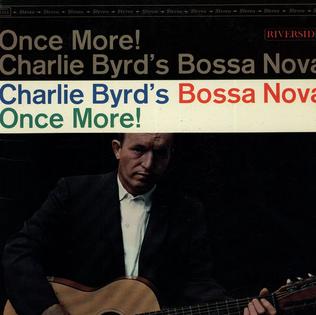 Once More! Charlie Byrd's Bossa Nova is an album by American jazz guitarist Charlie Byrd featuring tracks recorded in 1963 and released on the Riverside label.