Tommy Naurin (born 17 May 1984) is a Swedish footballer who plays for GIF Sundsvall as a goalkeeper. [1]

A political party platform or program is a formal set of principal goals which are supported by a political party or individual candidate, in order to appeal to the general public, for the ultimate purpose of garnering the general public's support and votes about complicated topics or issues. "Plank" is the term often given to the components of the political platform – the opinions and viewpoints about individual topics, as held by a party, person, or organization. The word "plank" depicts a component of an overall political platform, as a metaphorical reference to a basic stage made out of boards or planks of wood. The metaphor can return to its literal origin when public speaking or debates are actually held upon a physical platform. 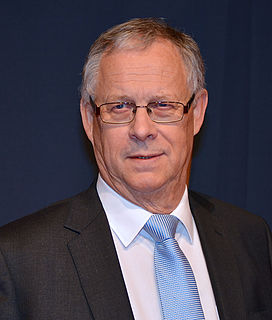 Lars Edvin "Lasse" Lagerbäck is a Swedish football manager and former player. He is the manager of the Norway national football team. Lagerbäck has managed a number of national teams prior to his current position. He managed the Swedish national team from 1998 until 2009, leading Sweden to five consecutive championships. He resigned as manager in 2009 after Sweden's failure to qualify for the 2010 FIFA World Cup in South Africa. After a short stint as manager of Nigeria, he led Iceland to unprecedented success as they qualified for their first finals competition, Euro 2016, and reached the quarter-finals, beating England in the last 16. Apart from his coaching duties, Lagerbäck has in recent years been a pundit for Premier League and UEFA Champions League broadcasting on Swedish television. He currently holds the record for managing a team in the finals of the European Championships with 4 appearances.

Leif Tommy Svensson is a Swedish football manager and former player. He is best known for playing for Östers IF and the Swedish national football team. He won the Guldbollen in 1969. He managed the Swedish National Team between 1991 and 1997 and led them to a bronze medal in the 1994 World Cup. 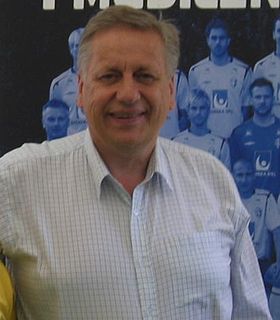 Tommy Limby was a Swedish cross-country skier who competed in the 1970s. He earned a gold medal in the 4 × 10 km relay at the 1978 FIS Nordic World Ski Championships in Lahti.

"En dag" is a ballad, which was the Swedish Melodifestivalen 1989 winning song and entry to the Eurovision Song Contest 1989, where it finished 4th. The song was written by Tim Norell, Ola Håkansson and Alexander Bard and performed by Tommy Nilsson.

Sweden chose their entrant for Eurovision Song Contest 1969 through Melodifestivalen 1969. A tie occurred between two songs, but after additional voting, the song "Judy, min vän" with Tommy Körberg was selected. It was written by Roger Wallis and Britt Lindeborg. The other song, "Hej clown" was written by Lasse Berghagen and later ABBA member Benny Andersson.

The 2008 Swedish Open was a men's tennis tournament played on outdoor clay courts. It was the 61st edition of the Swedish Open, and was part of the International Series of the 2008 ATP Tour. It took place at the Båstad tennisstadion in Båstad, Sweden, from 7 July through 13 July 2008.

"Judy, min vän" was the Swedish entry in the Eurovision Song Contest 1969, performed in Swedish by Tommy Körberg, the winner of Melodifestivalen 1969. Körberg was not the only Swede competing in the 1969 Contest, held in Madrid, Spain; Siw Malmkvist, who first had entered in 1960 with "Alla andra får varann", this year represented Germany with "Primaballerina".

Events from the year 2008 in Sweden

Kristinn Freyr Sigurðsson is an Icelandic football attacking midfielder, who plays for Valur.