tomviz is an open source software platform for reproducible volumetric visualization and data processing. [2] The platform is designed for a wide range scientific applications but is especially tailored to high-resolution electron tomography, with features that allow alignment and reconstruction of nanoscale materials. The tomviz platform allows graphical analysis of 3D datasets, but also comes packaged with Python, NumPy, and SciPy tools to allow advanced data processing and analysis. Current version is 1.7. [3] 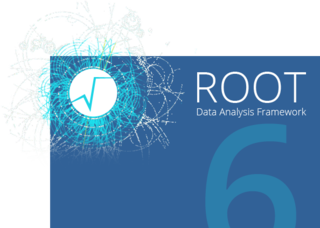 ROOT is an object-oriented program and library developed by CERN. It was originally designed for particle physics data analysis and contains several features specific to this field, but it is also used in other applications such as astronomy and data mining. The latest release is 6.22.00, as of 2020-07-02.

PyMOL is an open source molecular visualization system created by Warren Lyford DeLano. It was commercialized initially by DeLano Scientific LLC, which was a private software company dedicated to creating useful tools that become universally accessible to scientific and educational communities. It is currently commercialized by Schrödinger, Inc. PyMOL can produce high-quality 3D images of small molecules and biological macromolecules, such as proteins. According to the original author, by 2009, almost a quarter of all published images of 3D protein structures in the scientific literature were made using PyMOL.

ITK is a cross-platform, open-source application development framework widely used for the development of image segmentation and image registration programs. Segmentation is the process of identifying and classifying data found in a digitally sampled representation. Typically the sampled representation is an image acquired from such medical instrumentation as CT or MRI scanners. Registration is the task of aligning or developing correspondences between data. For example, in the medical environment, a CT scan may be aligned with an MRI scan in order to combine the information contained in both. 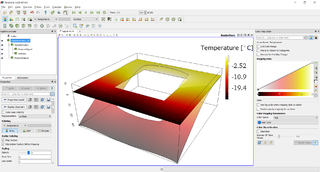 Kitware, Inc. is a technology company headquartered in Clifton Park, New York. The company specializes in the research and development of open-source software in the fields of computer vision, medical imaging, visualization, 3D data publishing and technical software development. In addition to software development, the company offers custom solutions, technical support and training, and books.

Enthought, Inc. is a software company based in Austin, Texas, United States that develops scientific and analytic computing solutions using primarily the Python programming language. It is best known for the early development and maintenance of the SciPy library of mathematics, science, and engineering algorithms and for its Python for scientific computing distribution Enthought Canopy.

OpenMS is an open-source project for data analysis and processing in protein mass spectrometry and is released under the 3-clause BSD licence. It supports most common operating systems including Microsoft Windows, OS X and Linux. 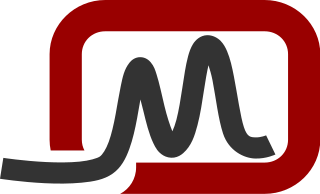 OpenChrom is an open source software for the analysis and visualization of mass spectrometric and chromatographic data. Its focus is to handle native data files from several mass spectrometry systems, vendors like Agilent Technologies, Varian, Shimadzu, Thermo Fisher, PerkinElmer and others. But also data formats from other detector types are supported recently.

MeVisLab is a cross-platform application framework for medical image processing and scientific visualization. It includes advanced algorithms for image registration, segmentation, and quantitative morphological and functional image analysis. An IDE for graphical programming and rapid user interface prototyping is available.

JetBrains s.r.o. is a Czech software development company whose tools are targeted towards software developers and project managers. As of 2019, the company has offices in Prague, Saint Petersburg, Moscow, Munich, Boston, Novosibirsk, Amsterdam, Foster City and Marlton, New Jersey.