Tonbridge Jubilee Sidings are located in Tonbridge, Kent, England, on the Redhill to Tonbridge Line to the west of Tonbridge station.

The London Midland and Scottish Railway (LMS) Jubilee Class is a class of steam locomotive designed for main line passenger work. 191 locomotives were built between 1934 and 1936. They were built concurrently with the similar looking LMS Stanier Class 5 4-6-0. They were nicknamed Red Staniers and Jubes. 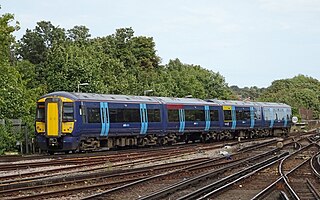 The British Rail Class 375 is an electric multiple unit train that was built by Bombardier Transportation at Derby Litchurch Lane Works, from 1999 to 2005. The class form part of the Electrostar family of units, which also includes classes 357, 376, 377, 378, 379 and 387, is the most numerous type of EMU introduced since the privatisation of British Rail.

The British Rail Class 377 Electrostar is a British dual-voltage electric multiple-unit passenger train (EMU) built by Bombardier Transportation at its Derby Litchurch Lane Works from 2001 to 2014. The Electrostar family is the most numerous type of EMU built in the post-privatisation period of Britain's railways.

The North Downs Line is a passenger-train line connecting Reading, on the Great Western Main Line, to Redhill and Gatwick Airport, along the Brighton Main Line, linking many centres of population in that part of the North Downs which it traverses en route.

Tonbridge railway station is on the South Eastern Main Line in England, serving the town of Tonbridge, Kent. It is 29 miles 46 chains (47.6 km) from London Charing Cross via Sevenoaks. Trains calling at the station are operated by Southeastern and Southern. 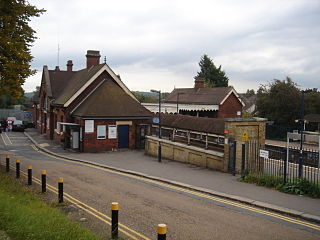 High Brooms railway station is on the Hastings line in the south of England and serves High Brooms and Southborough in the borough of Tunbridge Wells, Kent. It is 32 miles 70 chains (52.9 km) down the line from London Charing Cross. The station and all trains serving it are operated by Southeastern.

Leigh railway station is on the Redhill to Tonbridge Line and serves Leigh in Kent, England. It is 39 miles 56 chains (63.89 km) measured from London Charing Cross via Redhill. Train services are operated by Southern.

Penshurst railway station is on the Redhill to Tonbridge Line and is located approximately two miles north of Penshurst in Kent, in the village of Chiddingstone Causeway in England. It is 38 miles 3 chains (61.22 km) measured from London Charing Cross via Redhill. 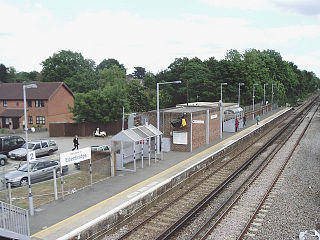 Edenbridge railway station is one of two stations serving Edenbridge in Kent, England. It is 33 miles 3 chains (53.17 km) measured from London Charing Cross via Redhill. Train services are operated by Southern.

Harrietsham railway station serves Harrietsham in Kent, England. It is 47 miles 36 chains (76.4 km) down the line from London Victoria.

Hollingbourne railway station serves Hollingbourne in Kent, England. It was opened in 1884 and is 45 miles 2 chains (72.5 km) down the line from London Victoria.

Barming railway station is located in Tonbridge and Malling Borough, west of Maidstone in Kent, England, and approximately 1 mile from Barming and Maidstone Hospital. It is 37 miles 43 chains (60.4 km) down the line from London Victoria. The station and all trains serving it are operated by Southeastern.

Borough Green & Wrotham railway station is located in Borough Green in Kent, England. It is 29 miles 46 chains (47.6 km) down the line from London Victoria. Train services are provided by Southeastern. 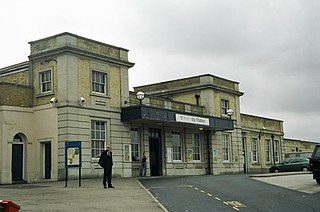 Ely railway station is on the Fen line in the east of England, serving the city of Ely, Cambridgeshire. It is 70 miles 30 chains (113.3 km) from London Liverpool Street and is situated between Waterbeach and Littleport stations on the Fen line to King's Lynn. It is an important junction for three other lines; the Ely to Peterborough Line, the Ipswich to Ely Line and the Norwich to Ely line.

The Maidstone line is a railway line in Kent, England. It diverges from the Chatham main line at Swanley Junction and proceeds down the Darenth valley to Otford junction. It continues via Borough Green & Wrotham and Maidstone East to Ashford, where it joins the South Eastern Main Line.

The Redhill–Tonbridge line is a railway line in South East England that links Redhill, Surrey with Tonbridge, Kent.

The area around Hornsey railway station in Hornsey has been the site of several railway maintenance facilities from the mid 19th century onwards.

The British Rail Class 700 Desiro City is an electric multiple-unit passenger train built between 2014 and 2018 for Thameslink as part of the Thameslink Programme in the United Kingdom.

Bedford Cauldwell Walk depot, is an electric multiple unit maintenance depot located on the Midland Main Line in the Cauldwell district of Bedford.