Tone Poems 3 is an album by mandolinist David Grisman, dobro player Mike Auldridge, and guitarist Bob Brozman that was released in 2000 by Grisman's label, Acoustic Disc. The album is a sequel to Grisman's albums Tone Poems and Tone Poems 2 , which were recorded with Tony Rice and Martin Taylor, respectively. The trio plays vintage slide and resophonic instruments such as the Dobro and resonator guitar. The songs cover many genres: Hawaiian, blues, country, bluegrass, and jazz. [1] 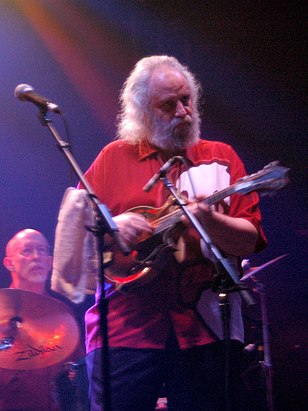 David Grisman is an American mandolinist. His music combines bluegrass, folk, and jazz in a genre he calls "Dawg music". He founded the record label Acoustic Disc, which issues his recordings and those of other acoustic musicians.

Mike Auldridge was a Dobro player and a founding member of the bluegrass group The Seldom Scene. The New York Times described Auldridge as "one of the most distinctive dobro players in the history of country and bluegrass music while widening its popularity among urban audiences". He also worked as a graphic artist. 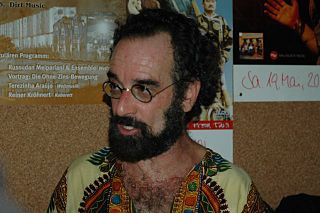 Bob Brozman was an American guitarist and ethnomusicologist.

The tenor guitar or four-string guitar is a slightly smaller, four-string relative of the steel-string acoustic guitar or electric guitar. The instrument was initially developed in its acoustic form by Gibson Guitar Company and C. F. Martin & Company so that players of the four-string tenor banjo could double on guitar.

Dobro is an American brand of resonator guitar, currently owned by the Gibson Guitar Corporation. In popular usage, the term is also used as a generic trademark for any wood-bodied, single-cone resonator guitar.

The ukulele is a member of the guitar family of instruments. It generally employs four nylon or gut strings or four courses of strings. Some strings may be paired in courses, giving the instrument a total of six or eight strings. 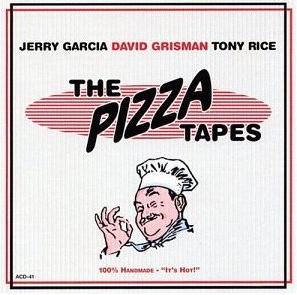 The Pizza Tapes is an album by Jerry Garcia, David Grisman (mandolin), and Tony Rice. It was recorded at Grisman's studio on two evenings in 1993, and features unrehearsed performances of folk and bluegrass songs. It was released on the Acoustic Disc label on April 25, 2000.

A resonator mandolin or "resophonic mandolin" is a mandolin whose sound is produced by one or more metal cones (resonators) instead of the customary wooden soundboard. These instruments are sometimes referred to as "Dobro mandolins," after pioneering instruments designed and produced by the Dopyera Brothers, which evolved into a brand name. The trademark "Dobro" is currently the property of the Gibson Guitar Corporation. When Gibson acquired the trademark in 1993, they announced that they would defend their right to its exclusive use.

Tony Rice is an album by American guitarist Tony Rice, released in 1977.

New Shabbos Waltz is an album by American musicians David Grisman and Andy Statman, released in 2006. It is a follow-up to their 1995 album Songs of Our Fathers and is a tribute to Grisman's and Statman's Jewish heritage. The album contains instrumental recordings from traditional Jewish repertoire, old and new.

Dawg Duos is a collaborative bluegrass album by David Grisman and 12 different artists, released in 1999. Each of them performs a duo with Grisman on mandolin or mandola. The instruments are as diverse as drums, accordion, autoharp, besides banjo, guitar, string bass, and violin. . This album can be compared with similar effort by Béla Fleck, Double Time, where Grisman performs duo with Fleck on one of the tracks.

Act I is the first album by the progressive bluegrass band The Seldom Scene. It is regarded one of the best and most influential albums ever recorded in the genre.

Act III is the third album by the progressive bluegrass Maryland band The Seldom Scene. The album features the band in their "classic" lineup. .

Old Train is the fourth album by the progressive bluegrass Maryland band The Seldom Scene. The album offers the group in their original lineup and features their trademark songs "Wait A Minute", "Old Train" and "C & O Canal". The record is a mixture of progressive, traditional bluegrass and folk material and also features guest musicians as Ricky Skaggs on violin or Linda Ronstadt on vocals. . 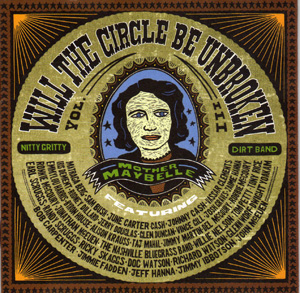 Bear Creek Guitars is a California-based manufacturer of Hawaiian instruments. Luthier Bill Hardin founded the company in Hawaii in 1995 after working at O.M.I Dobro and the Santa Cruz Guitar Company. Bear Creek primarily builds acoustic lap steel guitars in the tradition of the Weissenborn, one of only a handful of manufacturers basing their instruments on the original Weissenborn design. Hardin has collaborated with guitarist and ethnomusicologist Bob Brozman in designing an updated 7-string baritone version of the Style IV Weissenborn, called the BearTone.

Mike Auldridge was an American resonator guutar (Dobro) player. In addition to his solo albums and recordings with the Seldom Scene, he has been featured as a performer and collaborator on numerous albums by other artists.