The Tongatapu rail (Gallirallus hypoleucus) was a species of bird in the family Rallidae. It was apparently native to the island of Tongatapu in the Kingdom of Tonga, in Polynesia in the south-west Pacific Ocean. It is known only from brief descriptions of a specimen, now lost, collected from Tongatapu in 1777 in the course of James Cook's third voyage to the Pacific, and from a contemporary illustration by Georg Forster. [1] 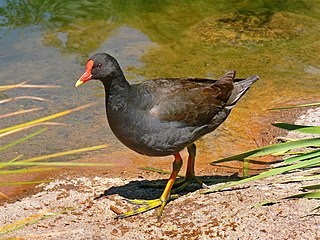 The rails, or Rallidae, are a large cosmopolitan family of small- to medium-sized, ground-living birds. The family exhibits considerable diversity and includes the crakes, coots, and gallinules. Many species are associated with wetlands, although the family is found in every terrestrial habitat except dry deserts, polar regions, and alpine areas above the snow line. Members of the Rallidae occur on every continent except Antarctica. Numerous island species are known. The most common rail habitats are marshland and dense forest. They are especially fond of dense vegetation.

The Calayan rail is a flightless bird of the rail, moorhen, and coot family (Rallidae) that inhabits Calayan Island in the Philippines. Though well known to natives of the island as the "piding", it was first observed by ornithologist Carmela Española in May 2004 and the discovery was officially announced on August 16, 2004. The formal description as a species new to science appeared in the journal Forktail.

Flightless birds are birds that through evolution lost the ability to fly. There are over 60 extant species, including the well known ratites and penguins. The smallest flightless bird is the Inaccessible Island rail. The largest flightless bird, which is also the largest living bird, is the ostrich. Ostriches are farmed for their decorative feathers, meat and their skins, which are used to make leather. 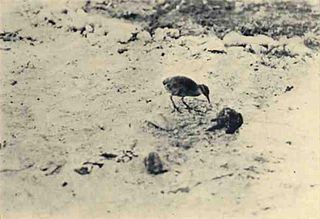 The extinct Wake Island rail was a flightless rail and the only native land bird on the Pacific atoll of Wake. It was found on the islands of Wake and Wilkes, but not on Peale, which is separated from the others by a channel of about 100 meters. It was hunted to extinction during the Second World War.

Gallirallus is a genus of rails that live in the Australasian-Pacific region. The genus is characterised by an ability to colonise relatively small and isolated islands and thereafter to evolve flightless forms, many of which became extinct following Polynesian settlement.

The New Caledonian rail is a large and drab flightless rail that is found on the island of New Caledonia in the Pacific. It is a dull brown above, with grey underparts, and has a yellowish, downward-curving bill. No one knows what it sounds like and it is not known whether it is nocturnal or crepuscular.

The Tahiti rail, Tahitian red-billed rail, or Pacific red-billed rail is an extinct species of rail that lived on Tahiti. It was first recorded during James Cook's second voyage around the world (1772–1775), on which it was illustrated by Georg Forster and described by Johann Reinhold Forster. No specimens have been preserved. As well as the documentation by the Forsters, there have been claims that the bird also existed on the nearby island of Mehetia. The Tahiti rail appears to have been closely related to, and perhaps derived from, the buff-banded rail, and has also been historically confused with the Tongan subspecies of that bird.

The buff-banded rail is a distinctively coloured, highly dispersive, medium-sized rail of the rail family, Rallidae. This species comprises several subspecies found throughout much of Australasia and the south-west Pacific region, including the Philippines, New Guinea, Australia, New Zealand, and numerous smaller islands, covering a range of latitudes from the tropics to the Subantarctic.

The invisible rail, Wallace's rail, or drummer rail is a large flightless rail that is endemic to the island of Halmahera in Northern Maluku, Indonesia, where it inhabits impenetrable sago swamps adjacent to forests. Its plumage is predominantly dark slate-grey, and the bare skin around its eyes, the long, thick bill, and the legs are all bright red. Its call is a low drumming sound which is accompanied by wing-beating. The difficulty of seeing this shy bird in its dense habitat means that information on its behaviour is limited. 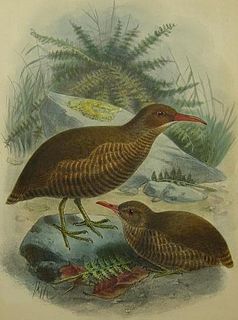 The Chatham rail is an extinct flightless species of bird in the family Rallidae. It was endemic to Chatham, Mangere and Pitt Islands, in the Chatham archipelago of New Zealand.

Sharpe's rail is a species of bird in the family Rallidae. It is known only from the type specimen of unknown origin, but it has been speculated that it originated from Indonesia. Due to the lack of recent records, it has been considered extinct, but new evidence suggests it is possibly better regarded as a morph of the buff-banded rail.

The barred rail is a species of bird in the rail family Rallidae. The species was formerly placed in the genus Rallus.

The Huahine rail was a species of bird in the family Rallidae. It was a medium-sized Gallirallus rail endemic to Huahine in the Society Islands of French Polynesia. It is known only from subfossil remains found at the Fa'ahia archaeological site on the island. Fa'ahia is an early Polynesian occupation site with radiocarbon dates ranging from 700 CE to 1200 CE. The rail is only one of a suite of birds found at the site which became extinct either locally or globally following human occupation of the island.

The Tubuai rail is an extinct species of flightless bird in the Rallidae, or rail family.

The Tahuata rail is an extinct species of flightless bird in the Rallidae, or rail family.

The Nuku Hiva rail is an extinct species of flightless bird in the Rallidae, or rail family.

The Mangaia rail is an extinct species of flightless bird in the rail family, Rallidae.