Antonio D. Laxa (June 12, 1934 – January 23, 2021), better known by his stage name Tony Ferrer, was a Filipino actor, film director and producer. He was tagged as the James Bond of the Philippines for his films in which he played a spy named Tony Falcon in the Agent X-44 movie series.

He won Best Actor at the Quezon City Film Festival for Sapagkat Sila'y Aming Mga Anak (1970) with Boots Anson-Roa and Vilma Santos. He received the nominations for FAMAS Award Best Actor in Sabotage (1966) and I Love Mama, I Love Papa (1971).

His first film was Kilabot sa Barilan (1960) with Fernando Poe Jr. and Zaldy Zshornack. His next supporting roles were in such war films as Mga Tigreng Tagabukid (1962) and Suicide Commandos (1962) starring Fernando Poe Jr., Romeo Vasquez and Joseph Estrada.

He was also paired with Niño Muhlach in Wonder Boy (1976). Ferrer was paired with Nora Aunor in Sa Lungga ng Mga Daga (1978).

He also did international films like The Vengeance of Fu Manchu (1967) with Christopher Lee, Cosa Nostra Asia (1974) with Chris Mitchum, Blind Rage (1978) with Fred Williamson, and Cover Girl Models (1975) with Pat Anderson for New World Pictures.

Ferrer had special participation as Tony Falcon in the remake of Agent X44 (2007), an action-comedy, played by Vhong Navarro.

He appeared in more than 155 films, including the 21-film series Agent X-44.[ citation needed ]

Ferrer was the younger brother of Espiridion Laxa, producer of Tagalog Ilang-Ilang Pictures and EDL Productions.

He was paired with Mutya ng Pilipinas Alice Crisostomo in The Golden Child (1971), and subsequently married her a year later. They have two kids, actress Mutya Crisostomo and Falcon. He has a daughter with actress Imelda Ilanan, Maricel Laxa. He also has a son, Mark by Pinky Poblete. Ferrer lived with a non-showbiz partner.

Max Alvarado was a FAMAS award-winning Filipino film actor known mainly by his portrayals of villains in a career which spanned six decades. 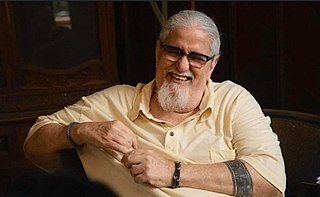 Maurice Ruiz de Luzuriaga Gallaga, better known as Peque Gallaga, was a multi-awarded Filipino film-maker. His most significant achievement in film was "Oro, Plata, Mata", which he directed after winning a scriptwriting contest sponsored by the Experimental Cinema of the Philippines. He has received an award from the International Film Festival of Flanders-Ghent, Belgium in 1983; a Special Jury Award from the Manila International Film Festival; and the 2004 Gawad CCP Para sa Sining. He also earned the title "The Steven Spielberg of The Philippines".

Maria Cecilia Ilanan Laxa-Pangilinan is a Filipino comedian and actress. She won Best Supporting Actress awards in the 1992 FAMAS Awards and Star Awards for her role in the 1992 film Iisa Pa Lamang.

Rafael Aranda Roco, Jr., known as Bembol Roco, is a Filipino actor whose work ranges from films to television. He is famous for his critically acclaimed role as Julio Madiaga in Maynila: Sa mga Kuko ng Liwanag. Though he acts in his country's films, he also had an important role in the 1982 Australian-U.S. film The Year of Living Dangerously. He also portrayed villain roles in Philippine action movies due to his signature bald head as well as various supporting roles. Bem starred in Sine Novela: Tinik sa Dibdib.

Gloria Romero is a Filipino-American actress appearing in film and television. Her career spans 60 years and includes award winning performances in the films Tanging Yaman, Nagbabagang Luha and 1955's Dalagang Ilocana. She is the first recipient of the lifetime achievement award from the Movie and Television Review and Classification Board (MTRCB).

Enrico Smith Quizon is a Filipino actor, director, producer, writer, and comedian. He is the 12th child of the "King of Comedy" Dolphy. He is a co-owner of Café Famous in Greenbelt, Makati. He is known for his character Francis, the main antagonist in My Dear Heart.

Ricardo Vizcarra Michaca, known by his stage name Dick Israel, was a Filipino character actor who played mostly villain and sidekick roles in many Filipino movies. He later branched out in television playing father and supporting roles. His father was a Spanish Filipino while his mother was a Kapampangan - Filipina mestiza.

Lotis Melisande Key is a former Filipino-American professional film and theater actress who starred in 85 major films in Asia. She was born and lives in the United States, although she spent her childhood traveling the world with her family. She was Vice President of the Minnesota Christian Writers Guild. She is the author of the novels The Song Of The Tree and A Thing Devoted.

Pag-ibig sa Tinubuang lupa is a poem written by hero Andres Bonifacio. The said poem was published in the first issue of Kalayaan. The poem exhorted Filipinos to join the crusade to achieve real Philippine independence. Bonifacio used the initials "A.I.B." that stands for Agapito Bagumbayan, Bonifacio's pseudonym along with the poem "Ang Dapat Mabatid ng Tagalog", another piece written by Bonifacio, according to historian Jim Richardson.