Rafael Aranda Roco, Jr. (born November 20, 1953) is a Filipino actor whose work ranges from films to television. He is famous for his critically acclaimed role as Julio Madiaga in Maynila: Sa mga Kuko ng Liwanag ("Manila in the Claws of Light"). Though he acts in his country's films, he also had an important role in the 1982 Australian-U.S. film The Year of Living Dangerously . He also portrayed bald villain roles in Philippine action movies as well as various supporting roles. Bem starred in Sine Novela: Tinik sa Dibdib .

He has twin sons named Felix and Dominic.

A recurring theme in some of his films is his character being teased for baldness in various forms. On one occasion, when he guested in the sitcom Home Along Da Riles , his character was referred to by Kevin Cosme (played by the sitcom's lead actor Dolphy) as Mr. Ecleo, a reference to both his own and Ruben Ecleo's Bald Head.

Roco appeared in a minor role in 2010's Dagim , a Cinema One Original film directed by Joaquin Pedro Valdes, about the strange goings-on in a remote mountain province.

He is well known to be most collaborative works with the late Lino Brocka as a "Brocka" regular and directors such as Ishmael Bernal, Chito Roño, Marilou Diaz-Abaya, and Joel Lamangan in the late nineteenth century.

Cinema Artists is an independent Filipino motion picture company founded by Lino Brocka and Mike de Leon to produce and distribute the films that Brocka or de Leon directed.

Juan Marasigan Feleo, better known as Johnny Delgado, was a Filipino television and movie actor, comedian, and writer. He is best known for his television work on the TV gag show Goin' Bananas. Other roles include the films Kakabakaba Ka Ba? and Tanging Yaman. The latter won him the FAMAS Award and the Metro Manila Film Festival Award for Best Actor in 2000. 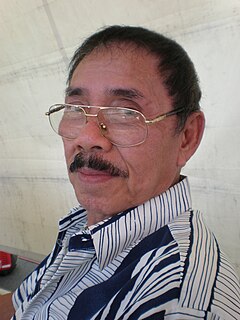 Soxie Topacio was a Filipino comedian, actor, writer and director.

Ricardo Vizcarra Michaca, known by his stage name Dick Israel, was a Filipino character actor who played mostly as King of villain and sidekick roles in practically most of Filipino movies. He lately branched out in television playing father and supporting roles. His father was a Spanish Filipino while his mother was a Kapampangan - Filipina mestiza.

Raoul Aragon was a Former Filipino actor in drama and action movies in the Philippines. Aragon was nominated in Gawad Urian Award 1980 as Best Actor in the movie Ina ka ng Anak Mo and he won the Best Actor award in Metro Manila Film Festival 1979 in the same movie. He was also known as Raul Aragon, Raoul Aragonn.

Marianne dela Riva, is a Filipina actress, popularly known as Luisa in Gulong ng Palad, a classic TV series in the Philippines aired in 1977. She was the favorite leading lady of action king Fernando Poe, Jr. and other action stars in the 1980s.

Antonio Laxa better known by his stage name Tony Ferrer, is a Filipino actor, film director and producer. He was tagged as the James Bond of the Philippines for his movies in which he played a spy named Tony Falcon in Agent X-44 movie series.

Jose "Kaka" Balagtas is a film director, writer, actor, producer and politician in the Philippines. He is the currently Vice Mayor of San Antonio, Nueva Ecija.

Rolando Desembrana Aquino was a Filipino actor and director, best known for playing antagonist roles in films and television shows. Became a Born-Again Christian and was ordained as a Pastor of Jesus Lights the Way to the Father's Kingdom Church, Antipolo City, Officiated by Bishop Federico "Butch" Villanueva.

Ruel Vernal is a Filipino actor. He was known for portraying villain roles in many famous Philippine movies.