Thy Womb (Filipino : Sinapupunan) is a 2012 Filipino drama film starring Nora Aunor, Bembol Roco, Mercedes Cabral, and Lovi Poe. [1] Produced by Center Stage Productions and the Film Development Council of the Philippines (FDCP), Melvin Mangada and Jaime Santiago, the film was written by Henry Burgos and directed by Brillante Mendoza. The film was one of the eight official entries to the 2012 Metro Manila Film Festival.

The film was referred to as "The Philippines' principal trophy" in Encyclopædia Britannica's section discussing the previous year's films in the Britannica Book of the Year 2013. [6]

Thy Womb is about a Tausug woman who is the midwife of their village. Many childbirths were done by her, ironically, she does not have any children.

Nora Cabaltera Villamayor professionally known as Nora Aunor is a Filipina actress, recording artist, and film producer. Aunor has also appeared in several stage plays, television shows and concerts. She is known as Philippine cinema's "Superstar" and conferred as Philippine National Artist for Film and Broadcast Arts. The Hollywood Reporter called her "The Grand Dame of Philippine Cinema" for her performance in the movie Taklub and her contribution to the Philippine film industry. 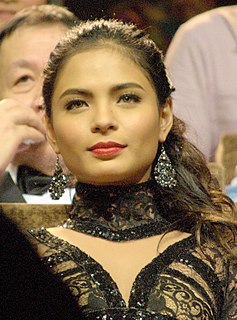 Mario Herrero O'Hara was a Filipino film director, film producer and screenwriter known for his sense of realism often with dark but realistic social messages.

Rafael Aranda Roco, Jr., popularly known as Bembol Roco, is a Filipino actor whose work ranges from films to television. He is famous for his critically acclaimed role as Julio Madiaga in Maynila: Sa mga Kuko ng Liwanag. Though he acts in his country's films, he also had an important role in the 1982 Australian-U.S. film The Year of Living Dangerously. He also portrayed villain roles in Philippine action movies due to his signature bald head as well as various supporting roles. Bem starred in Sine Novela: Tinik sa Dibdib.

Gloria Lerma Yatco, better known by her screen name Mona Lisa, was a Filipina film actress. Known by the screen name Fleur de Lis before and during World War II, she was one of the renowned Filipina actresses of the late 1930s and 1940s.

The 6th Metro Manila Film Festival was held in 1980.

Sa Ngalan ng Ina is a Filipino drama series by TV5. This is the first offering of TV5 Mini Serye which aired only for a month. It aired on October 3 after Wil Time Bigtime. 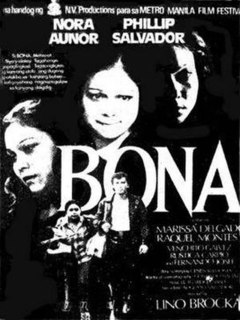 Bona is a 1980 Filipino drama film directed by Lino Brocka, with the film's lead character, Bona, played by acclaimed actress Nora Aunor. It was submitted as an entry to the Metro Manila Film Festival that same year. 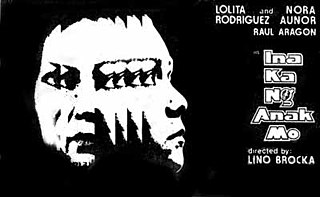 Ina Ka ng Anak Mo is a 1979 Filipino film directed by Lino Brocka and starring Nora Aunor. The film was an official entry to the 1979 Metro Manila Film Festival, and garnered several awards including Best Actor for Raoul Aragonn and a tie for Best Actress between Lolita Rodriguez and Nora Aunor. It also garnered several nominations in the following year's FAMAS and Gawad Urian. Despite its adult theme and rating, the film was successful at the box office during its commercial run. The story portrays the everyday life of the deeply religious Renata and her daughter Ester, who is married to Luis.

Raoul Aragon was a former Filipino actor in drama and action movies in the Philippines. Aragon was nominated in Gawad Urian Award 1980 as Best Actor in the movie Ina ka ng Anak Mo and he won the Best Actor award in Metro Manila Film Festival 1979 in the same movie. He was also known as Raul Aragon, Raoul Aragonn.

Mercedes Cabral is a Filipino actress. She is best known for starring in Philippine arthouse and independent films, notably those by Brillante Mendoza such as Serbis, Kinatay, Captive, and Thy Womb. She also appeared in the South Korean film Thirst directed by Park Chan-wook. In 2021, she appeared in Huwag Kang Mangamba. She played the main antagonist role Agatha, a wicked stepmother of Joy, which is played by Francine Diaz. In 2016, she appeared in a Phil Giordano's award winning short film SUPOT. 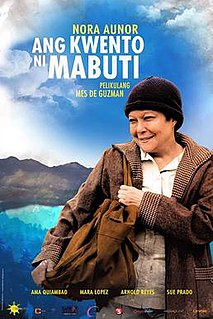 Ang Kwento Ni Mabuti is a 2013 Filipino drama film and the official entry to the first CineFilipino Film Festival.

Guy and Pip is an appellation for the very popular Philippine cinema "love team" of Nora Aunor and Tirso Cruz III whose work in film, television and recording made them the most popular Philippine show business love team of all time. The nickname "Guy" refers to Aunor while "Pip" refers to Cruz. The team started working together in the late 1960s until the 1980s. At the peak of their popularity in the 1970s, they were able to make several movies with box-office successes, television shows, as well as radio programs, and their recordings were instant hits.

The Gawad Urian Best Actress,, is a movie award given by the Manunuri ng Pelikulang Pilipino to lead actresses in a Philippine movie. 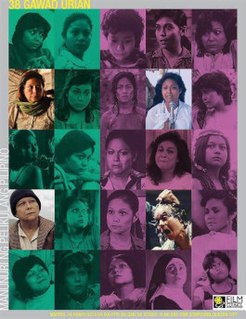 The 38th Gawad Urian Awards or Ika-38 na Gawad Urian was held on June 16, 2015 at Studio 10 of ABS-CBN. They honored the best Filipino films for the year 2014. It was also aired live at Cinema One channel.