Tony Heurtebis (born 15 January 1975) is a French football goalkeeper who played for Stade Rennais, Troyes AC, Stade Brestois and FC Nantes Atlantique. He has been capped for the France under-21 squad. [1] 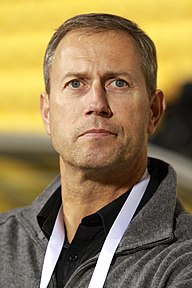 Espérance Sportive Troyes Aube Champagne or ESTAC is a French association football club, based in Troyes, who play in Ligue 2. It was founded in 1986, as the third professional club from the city, after ASTS and TAF. They won the Intertoto Cup in 2001, beating Newcastle United on the away goals rule after the score was 4–4 on aggregate.

Stade de l'Aube is a multi-use stadium in Troyes, France. It is currently used mostly for football matches, by Troyes AC. The stadium is able to hold 20,400 people and was built in 1956.

Olivier Thomas is a French footballer who last played for AC Ajaccio.

Laurent Batlles is a French former professional footballer who played as a midfielder and current manager of Ligue 2 side Troyes AC.

Farid Ghazi is a retired Algerian international footballer. He played as a forward.

Olympique Lyonnais won Division 1 season 2001/2002 of the French Association Football League with 66 points. The title was decided in the very final game of the season when Lyon defeated erstwhile championship leaders Lens at Stade Gerland. Lyon had to win the match to take the title, and won 3–1, ending Lens's title dream. It was Lyon's first league championship, and it began their record seven successive league titles. 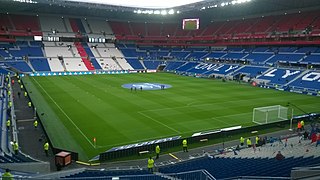 Parc Olympique Lyonnais, known for sponsorship reasons as Groupama Stadium, and in some competitions as Grand Stade de Lyon or Stade des Lumières, is a 59,186-seat stadium in Décines-Charpieu, in the Lyon Metropolis. The home of French football club Olympique Lyonnais, it replaced their previous stadium, Stade de Gerland, in January 2016.

The 1999–2000 Ligue 1 season was the 62nd since its establishment. AS Monaco won the French Association Football League with 65 points.

The 1998–99 Ligue 1 season was the 61st since its establishment. FC Girondins de Bordeaux won the French Association Football League with 72 points.

Mohamed Bradja is an Algerian former professional footballer who played as a centre-back. At international level, he represented Algeria, participating at the 2002 African Cup of Nations.

The 2001–02 Coupe de la Ligue began on 1 September 2001 and the final took place on 20 April 2002 at the Stade de France. Lyon were the defending champions, but were knocked-out by Bordeaux in the Round of 16. Bordeaux went on to win the tournament, beating Lorient 3–0 in the final.

David Hamed is a French former professional footballer. He last played in the Championnat National as a defender for Amiens SC. He also holds Algerian citizenship.

Corentin Jean is a French professional footballer who plays as a striker for Ligue 2 club RC Lens.

Yehvann Diouf is a French professional footballer who plays as a goalkeeper for Ligue 1 club Stade de Reims.