Stade Brestois 29 (French pronunciation: ​ [stad bʁɛstwa] ; locally  [stɒd brestwɒ] ; commonly referred to as Stade Brest or simply Brest, named Stade brestois in French) is a French association football club based in Brest, Brittany. The club was founded in 1950. Brest currently plays in Ligue 1, the first division in French football. The club plays its home matches at the Stade Francis-Le Blé, a stadium with a capacity of 15,097.

Below are the notable former and current players who have represented Stade Brestois in league and international competition since the club's foundation in 1903. To appear in the section below, a player must have either played in at least 80 official matches for the club or represented their country's national team either while playing for Brest or after departing the club. For a complete list of Stade Brestois players, see Category:Stade Brestois 29 players.

Olympique Gymnaste Club Nice Côte d'Azur, commonly referred to as OGC Nice or simply Nice, is a French professional football club based in Nice. The club was founded in 1904 and currently plays in Ligue 1, the top tier of French football. Nice plays its home matches at the Allianz Riviera. Nice are managed by former French international Patrick Vieira and captained by Brazilian defender Dante. 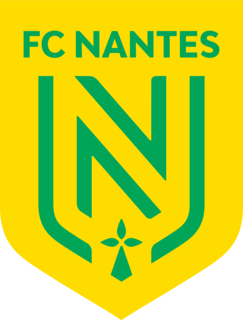 Football Club de Nantes Atlantique, commonly referred to as FC Nantes or simply Nantes, is a French professional football club based in Nantes in Brittany. The club was founded on 21 April 1943, during World War II, as a result of local clubs based in the city coming together to form one large club. From 1992 to 2007, the club was referred to as FC Nantes Atlantique before reverting to its current name at the start of the 2007–08 season. Nantes play in Ligue 1, the first division of Football in France. Nantes is one of the most successful clubs in French football, having won eight Ligue 1 titles, three Coupe de France wins and attained one Coupe de la Ligue victory. The club is famous for its jeu à la nantaise, its collective spirit, mainly advocated under coaches José Arribas, Jean-Claude Suaudeau and Raynald Denoueix and for its youth system, which has produced players such as Marcel Desailly, Didier Deschamps, Mickaël Landreau, Claude Makélélé, Christian Karembeu and Jérémy Toulalan. As well as Les Canaris, Nantes is also nicknamed Les jaunes et verts and La Maison Jaune.

Stade Malherbe Caen is a French professional football team, playing in the city of Caen in Normandy. The club was founded on 17 November 1913 by the merger of Club Malherbe Caennais and Club Sportif Caennais. The team takes its name from François de Malherbe, a 17th century poet from Caen.

Stade de Reims, commonly referred to as Stade Reims or simply Reims, is a French professional football club based in Reims in Grand-Est. The club was formed in 1910 under the name Société Sportive du Parc Pommery and currently plays in Ligue 1, the top level of Football in France having been promoted from Ligue 2 in the 2017–18 season. Reims plays its home matches at the Stade Auguste Delaune, a renovation of the old complex located within the city. The team is managed by David Guion.

Union Sportive Créteil-Lusitanos is a French football club based in Créteil, a southeastern suburb of Paris. The club was founded in 1936 and currently play in the Championnat National, the third division of French football. The football club forms part of an omnisports club that is also known for its handball team.

Stade Lavallois Mayenne Football Club, also referred to as Stade Laval or simply Laval, is a French association football club based in Laval in western France. The club was formed on 17 July 1902 and currently play in the Championnat National, the third level of French football. Laval plays its home matches at the Stade Francis Le Basser located in the city.

Corentin da Silva Martins is a French former professional footballer who played as an attacking midfielder, and the current manager of the Mauritania national team. 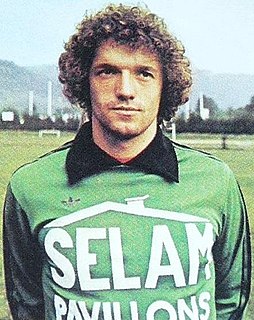 Albert Rust is a former French footballer, who currently works as goalkeeper coach for AS Saint-Étienne. 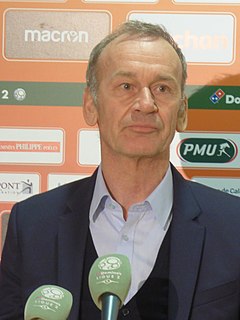 Jean-Marc Furlan is a French football manager and former player who played as a defender. He is currently in charge of Ligue 2 side AJ Auxerre.

The 2007-08 Top 14 Competition was a French domestic rugby union club competition, operated by the Ligue Nationale de Rugby (LNR). Because France hosted the 2007 Rugby World Cup, the competition did not begin at its normal time of August, but instead started on the last weekend in October 2007, one week after the Rugby World Cup final. The league compensated for the late start by playing on several weekends that it normally skips, namely the weekends of the 2008 Six Nations Championship and the semifinals and final of the 2007-08 Heineken Cup. The season ended on June 28, 2008, with Toulouse defeating regular-season league leader Clermont 26–20 in the final and thereby lifting the Bouclier de Brennus.

Avenir Sportif Béziers is a French association football club founded in 2007 by the merger of AS Saint-Chinian, FC Béziers Méditerranée, and the Béziers-Méditerranée Football Cheminots. They are based in the town of Béziers and their home stadium is the Stade de Sauclières.

Kamel Chergui is a French professional footballer who plays as a right winger for the French club Le Puy Foot.

Lenny Jean-Pierre Pintor is a French footballer who plays as a forward for Ligue 2 side Troyes AC, on loan from Olympique Lyonnais.

Union Sportive Luistanos Saint-Maur or US Lusitanos Saint-Maur is a French football club based in Saint-Maur-des-Fossés. The club was founded in 1966 by Portuguese immigrants who worked in a factory in the town. They play their games at the Stade Adolphe-Chéron. They have twice reached the Championnat National, the third level of French football, and in 2002 they reached the round of 16 in the Coupe de France.

Pierre Magnon is a French professional footballer who plays as a midfielder for US Avranches.

Ibrahima Diallo is a French professional footballer who plays as a midfielder for Premier League club Southampton.

The 2019–20 season was Stade Brestois 29's 70th season in existence and the club's 1st season back in the top flight of French football. In addition to the domestic league, Brest participated in this season's editions of the Coupe de France, and the Coupe de la Ligue. The season covered the period from 1 July 2019 to 30 June 2020.

The 2020–21 Stade Brestois 29 season is the club's 71st season in existence and its club's 2nd consecutive season in the top flight of French football. In addition to the domestic league, Brest will participate in this season's edition of the Coupe de France. The season covers the period from 1 July 2020 to 30 June 2021.