Last updated July 30, 2021
This article is about the football team of Grenoble. For the rugby team, see FC Grenoble.
Football club

Grenoble Foot 38, commonly referred to as simply Grenoble or GF38, is a French association football club based in Grenoble. The club plays its home matches at the Stade des Alpes, a sports complex based in the heart of the city, and wears white and blue.

In 2004, Grenoble Foot was acquired by Index Holdings, a Japanese mobile software company, therefore becoming the first French football club to have foreign owners. The price of the deal was around €2 million. [1] [2] The new owners invested in the Stade des Alpes, a new ground with an initial capacity of 20,000 which opened in February 2008. [3] Grenoble finished the 2007–08 Ligue 2 season in third place, thus returning to Ligue 1 for the first time since 1963.

In the 2008–09 Ligue 1 season, Grenoble finished 13th. [2] However, after losing their first eleven games of the following season, they were eventually relegated with six games remaining amidst severe financial problems. [4] [5]

The professional football club was liquidated in July 2011 with debts of €2.9 million, and relegated administratively to Championnat de France Amateur 2, the fifth tier. [6] [7] Index provided false financial statements during their ownership of the club. [2] [8]

Below are the notable former players who have represented Grenoble and its predecessors in league and international competition since the club's foundation in 1997. To appear in the section below, a player must have played in at least 80 official matches for the club.

Football Club d'Échirolles is a French association football club founded in 1949. They are based in Échirolles, near Grenoble in Isère, France and are currently playing in the Ligue Auvergne-Rhône-Alpes, the 6th tier of French football. They play at the Stade Eugène Thénard in Échirolles.

Yvon Pouliquen is a French football manager and former footballer. He played as a defensive midfielder for 14 seasons and made 455 appearances in the French league. He then spent several years as a manager, and won back-to-back Coupes de France, in 2001 with Strasbourg and in 2002 with Lorient, as well as a taking Metz to the quarter finals in 2008.

The 2009–10 Championnat de France Amateurs season was the 12th edition of the competition since its establishment. The competition officially began on 8 August 2009 and ended in May 2010. The competition consisted of 73 clubs spread into four parallel groups of 18 with one of the groups containing 19 clubs. It is open to reserve teams in France and amateur clubs in France, although only the amateur clubs are eligible for promotion to the Championnat National. The highest-placed amateur team in each pool are promoted, replaced by the four lowest-placed in the Championnat.

The 2010–11 Ligue 2 season was the 72nd since its establishment. Caen were the defending champions. The fixtures were announced on 22 May 2010 and the season began on 6 August and ended on 27 May 2011. The winter break would be in effect between 22 December and 14 January 2011. There were three promoted teams from the Championnat National, replacing the three teams that were relegated from Ligue 2 following the 2009–10 season. A total of 20 teams currently competes in the league with three clubs suffering relegation to the third division, the Championnat National. All clubs that secured Ligue 2 status for the season were subject to approval by the DNCG before becoming eligible to participate. In addition, German sportswear company Puma, whom the Ligue de Football Professionnel share a partnership with, provided a brand new match ball for the new season.

Hamadi Ayari is a French professional footballer of Tunisian descent who plays as a midfielder for Sporting Club Lyon.

The 2011–12 Championnat National season was the 14th since its establishment. The previous season's champions was Bastia. The league schedule was announced on 16 May 2011 and the fixtures were determined in July. The season began on 6 August 2011 and ended on 26 May 2012. The winter break was in effect from 23 December to 6 January.

Ibrahima Sacko is a French professional footballer who plays as a midfielder for Championnat National 2 side Fréjus Saint-Raphaël.

The 2012–13 Championnat National season was the 15th season since its establishment. The previous season's champions were Nîmes. The league schedule was announced in May 2012 and the fixtures were determined on 7 July. The season began on 3 August and ended on 24 May 2013. The winter break took place from 23 December to 12 January 2013.

FC Balagne is a French football club based in L'Île-Rousse, Haute-Corse, Corsica. It was known as FB Île Rousse during the period between 2008 and 2018, and under other name prior to that. As of the 2020–21 season, the club play in Régional 1 Corsica, the sixth level of French football.

The 2017–18 Championnat National 3 is the first season of the fifth tier in the French football league system in its current format. The competition is contested by 171 clubs split geographically across 12 groups of 14 teams, 1 group of 15 teams and 1 group of 16 teams. The teams include amateur clubs and the reserve teams of professional clubs. 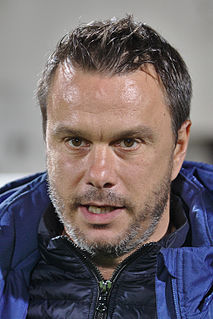 Hervé Della Maggiore is a French former footballer who played as a midfielder, and is the coach of French club FC Villefranche.

The 2017–18 Championnat National season is the 20th season since its establishment. The fixtures were announced on 25 July 2017.

The 2018–19 Rugby Pro D2 was the second-level French rugby union club competition, behind the Top 14, for the 2018–19 season. It ran alongside the 2018–19 Top 14 competition; both competitions are operated by the Ligue Nationale de Rugby (LNR).

Athlético Marseille is a French amateur football club founded in 1964 and based in the Bouches-du-Rhone department of Marseille. The club was named until 2018 after Consolat, a neighborhood located in La Calade, in the 15th arrondissement, north of Marseille.

Julien Boyer is a French professional footballer who plays as a left-back for Championnat National club Bourg-en-Bresse, on loan from Ligue 1 club Clermont.

The 2019–20 Championnat National 3 was the third season of the fifth tier in the French football league system in its current format. The competition was contested by 168 clubs split geographically across 12 groups of 14 teams. The teams included amateur clubs and the reserve teams of professional clubs. The season was suspended indefinitely on 12 March 2020 due to the COVID-19 pandemic.